Observing the Perseids - A Perennial Guide 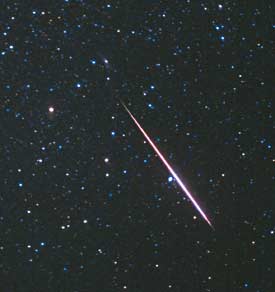 A brilliant Perseid flashes across the constellation Andromeda on August 12, 1997. Rick Scott and Joe Orman in Florence Junction, Arizona, got lucky during an 8-minute exposure with a 21-millimeter f/2 lens and Ektachrome P1600 film.

The most familiar annual meteor shower — which happens during many people's vacation seasons — is best witnessed on a moonless night during prime meteor-watching hours, from about midnight until the first glimmer of dawn. During those hours the shower's radiant point, located between Perseus and Cassiopeia, will be getting high in the northeast — so meteors should flash across all parts of the sky at a rate of about one a minute as seen by a single observer.

That, anyway, is the prediction if your sky is good and dark. But even if you live under moderate light pollution, as most people do, you can catch at least the brightest of the Perseids.

This "Old Faithful" of meteor showers reaches its broad maximum around mid-August. Fortunately, the Perseids stay active for several days before and after their peak.

You need no experience to watch the Perseids. Just find a spot with an open sky view and no late-night lights nearby. Bundle up warmly, lie back on a ground pad or reclining lawn chair, and watch the stars. I use a sleeping bag, sometimes with an electric heating pad inside. The bag not only provides warmth against the late-night chill but also serves as mosquito armor in this era of West Nile virus. Cover your remaining exposed parts (including hair and clothing) with DEET-based mosquito repellent and you won't get bit; at least I don't.

Be patient, and give your eyes plenty of time to adapt to the darkness. The direction to watch is not necessarily toward Perseus but wherever your sky is darkest, probably straight up.

Watching meteors is great fun, but counting them can be even better — this way you can contribute to our ongoing knowledge of how the Perseid shower changes from year to year.

To count by standardized methods, you'll need to start with a fairly dark sky, preferably one in which you can see stars to at least magnitude 5.5 with your unaided eyes. You'll need a watch and either a notepad and pencil or a tape recorder into which to dictate notes.

Once you're settled in, dark-adapted, and ready to start, note the time. Whenever you see a meteor, note it with either P for Perseid or NP for non-Perseid, depending on whether its path, if traced far enough back across the sky, would intersect northern Perseus. It's also highly desirable, though not essential, to estimate each meteor's peak magnitude.

Most of the time nothing will be happening. Use this time to find your naked-eye limiting magnitude in the part of the sky you're watching (charts for this purpose are on the Web sites listed below), and note this along with the time. Do it again if sky conditions or your dark adaptation change.

It's okay to take an occasional break; note the time when you stop watching and when you start again. You should note down the time about every half hour in any case.

Finally, estimate what percentage of your view is obstructed by trees, buildings, or clouds (not counting the outermost part of your peripheral vision, which is mostly insensitive to meteors anyway). If the amount of obstruction changes, such as by clouds coming and going, note a new estimate and the time. Quit if the obstruction becomes more than 20 percent.

If two or more people observe together, each needs to make his or her own separate count, limiting-magnitude estimate, and other notes completely uninfluenced by anyone else. Work exactly as if alone. You may want to face different directions, and talk about other topics.

The purpose of all this is to give your numbers meaning; that is, to make them convertible to the standard measure of the true meteor activity: the zenithal hourly rate, or ZHR. This is the number of meteors that would be seen by a single observer per hour if the shower’s radiant were at the zenith, if the view were unobstructed, and if the sky were dark enough for 6.5-magnitude stars to be visible.

A good activity profile — a graph of how the ZHR behaves from the shower's beginning to end — requires many thousands of meteors counted the same way by many observers. Ideally, the counters should be spaced all around the globe to keep the shower under continuous, 24-hour watch for several days running. The more good counts are made, the more accurately the final graph will represent the shower's actual behavior. Observers are especially needed at Earth's sparsely populated longitudes, as well as at longitudes that are mostly clouded out.

Official instructions, star maps for finding your naked-eye limiting magnitude, and report forms for submitting your observations are on the International Meteor Organization’s website, and also on the North American Meteor Network’s site. You can report your observations to either group; they share data between them.

The central Internet hangout for meteor observers, full of news and comment, is www.meteorobs.org. After making a count, observers often log on to compare what they saw with their late-night compatriots around the world.