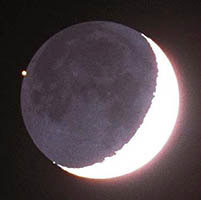 Los Angeles astrophotographer Michael Stecker captured this scene moments before the April 10, 1997, occultation of Aldebaran by the waxing crescent Moon. His 5-second exposure was on Kodak Gold 400 film with a 5-inch f/6 Astro-Physics refractor. The event was widely seen in western North America.

Lunar occultations timed to an accuracy of a few tenths of a second have various scientific uses, particularly in refining our knowledge of lunar topography (Sky & Telescope: November 1988, page 480). But once the laser altimeter data from the 1992 Clementine mission to the Moon are properly analyzed, photoelectric and video timings accurate to a few hundredths of a second will be in most cases the only amateur timings still on the cutting edge.

You can get an accurate video timing by running a camcorder continuously to record the time signals before and after the occultation (or perhaps during it if you use a portable phone). You can aim the camcorder down a telescope's eyepiece to record the event. This should be easy if the occulted star is quite bright. Even for purely visual events, a camcorder can be used just to record audio — your voice on top of time signals — if you don't have a tape recorder. See "Camcorder Timing Tips" for more information about this technique.

Within a mile or two of the edge of a lunar occultation's predicted path, termed its northern or southern limit, you might see the star wink off and on several times as it passes behind hills and valleys near the Moon's poles. This is a grazing occultation. Observers spaced across this graze zone will time different sequences of events, which can be analyzed to map the lunar limb profile. Such timings remain important because the Clementine laser altimeter could not map the lunar polar regions. And they are easy to make — just call out the successive disappearances and reappearances to a camcorder or tape recorder while time signals are being recorded simultaneously in the background. The time base can be a regular radio broadcast from a car radio, if someone else records the broadcast on top of WWV or CHU.

For most graze occultations, we receive data from only one or two observers. Many more are needed to properly record the lunar profile as presented to Earth, which is never exactly the same from one day to the next. About two dozen grazes each year are visible in a 6-inch telescope within 100 miles of a given location. Some are observed by organized groups of amateurs spaced a few hundred yards apart in a line; newcomers are especially welcome on these expeditions. Contact the International Occultation Timing Association (IOTA). 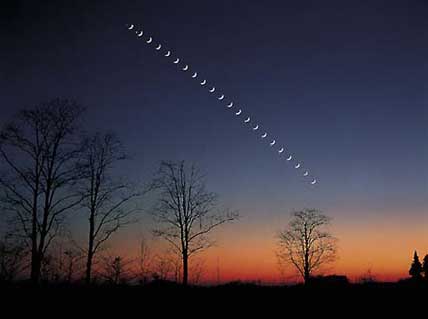 Akira Fujii captured this series of the crescent Moon occulting Venus on the evening of December 2, 1989, from Japan. He took a 10-second exposure every 5 minutes as the Moon descended toward the lower right. The first two images show Venus just before it went behind the dark limb of the lunar disk. The planet reappears nine shots later.

Detailed predictions for 18 standard stations in North America (Halifax; central Massachusetts; Montreal; Washington, DC; Toronto; Miami; Atlanta; Chicago; Kansas City; Winnipeg; Austin; Denver; New Mexico & Arizona; Edmonton; Los Angeles; northern California; Vancouver; and Honolulu) are given in the Observer’s Handbook of the Royal Astronomical Society of Canada. About 15 occultations of stars as faint as 5th magnitude are listed for each location. The handbook also has graze maps for nearly 200 occultations of stars to magnitude 7.5 for the U.S., Canada, and northern Mexico.

The International Lunar Occultation Centre in Japan prepared the predictions for the Observer's Handbook. It collects and analyzes timings; you can obtain the necessary report forms and instructions at IOTA's Web site. Observers from Europe and the United Kingdom are encouraged to join IOTA/ES.

Occultations by Planets and Asteroids

Accurate timings of planetary and asteroidal occultations can reveal fundamental new information about the size, shape, and atmosphere (if any) of the occulting body, so such timings are especially sought by IOTA. The more timings we receive from widely spaced observers, the better we can reconstruct the object's profile.

Asteroids are so distant that the locations of their occultation tracks are uncertain by hundreds of miles. So even if you're far from the predicted path, you should watch for an event. You might even record a brief occultation by a small moon circling an asteroid, an arrangement we've known can exist ever since the Galileo spacecraft discovered Dactyl orbiting Ida. More accurate predictions often become available days or hours before an occultation, when the asteroid and target star can be imaged on the same CCD frame. These updated predictions can be found on IOTA's Web site.

IOTA maintains a list of occultation observers so that we can inform them by e-mail or telephone of last-minute path shifts onto their sites. Please contact David Dunham by e-mail if you would like to be included. Those with CCD equipment and astrometric reduction software are especially needed to update predictions.

Finder charts for particularly good asteroid occultations usually appear in the Calendar Notes section of Sky & Telescope. When setting up to watch for an asteroid occultation, allow at least a half hour to locate the target star. Even better, practice finding it on a previous night. Many observers who thought they'd left enough time have ended up in a mad rush and missed good events by just a few minutes.

Some events involving 8th-magnitude or brighter stars can be videorecorded with telescopes as small as 8 inches using an ordinary low-light surveillance camera, available for less than $200. Tenth-magnitude stars might be reached this way with 12-inch scopes. If shortwave time signals are recorded on the audio track, we can recover event times accurate to 0.03 second. IOTA strongly encourages such recordings. 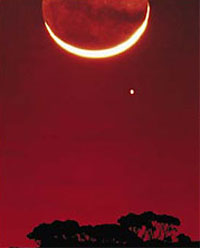 The crescent Moon about to occult Mercury on the morning of June 14,1996. Akira Fujii photographed this scene from his Chiro Observatory South in Western Australia.

Finder charts, detailed maps, observing news, and full information on events worldwide are carried in the Occultation Newsletter published by IOTA. A subscription (US$20 per year for USA, Canada, and Mexico; US$25 per year elsewhere) can be obtained by writing Art Lucas, IOTA Secretary-Treasurer, at 5403 Bluebird Trial, Stillwater, OK, 74074-7600, USA.

Annual membership in IOTA costs US$30 (for USA, Canada, and Mexico) and US$35 for all others. (Observers from Europe and the UK are encouraged to join the European Section (IOTA/ES)). Membership includes a subscription to the Occultation Newsletter, annual predictions for your viewing location, and supplements. For more information contact Art Lucas at the address above.