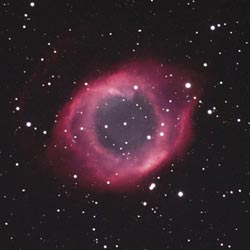 For this striking view of the Helix, Gary L. Stevens took his Takahashi 152-millimeter refractor to Mount Pinos, California, on July 4, 2000. This is a composite of seven white-light exposures at f/6 and three more through color filters using an SBIG ST-8E CCD camera. The total exposure time was 100 minutes.

Without a doubt, the Helix Nebula is one of the most beautiful objects in the heavens. It earns its name from a double-ringed appearance on photographs, like looking down at two coils of a spring. Long-exposure photos show nebulous fingers pointing inward from the ring toward the central star. The Hubble Space Telescope captured stunning close-ups of these radial filaments, showing each with a cometlike head and a gossamer tail.

Also known as NGC 7293 and Caldwell 63, the Helix Nebula in Aquarius is one of the nearest and brightest of the class of objects known as planetary nebulae. A planetary nebula is born of an aging star that exhausts its nuclear fuel and sheds its outer layers into space. As the nebula expands, the core of the star is exposed. This hot, dense cinder will evolve into a white-dwarf star and then slowly cool over billions of years.

Observationally, the Helix is one of the easiest of bright planetaries and one of the most elusive. It can be seen in binoculars and yet remain invisible in large telescopes. These claims may seem contradictory, but they can be explained by the nebula’s low surface brightness. If the light of the Helix were gathered into a single point, it would shine with the light of a 7.3-magnitude star. But this light is spread over a rather large area of the sky with about half the angular diameter of the Moon! Low powers will help concentrate the nebula’s light, and wide fields will show plenty of surrounding dark sky for contrast. That’s why the Helix is a good small-scope target.

With such an elusive quarry, you need to hunt the Helix carefully — being sure that your scope is aimed at the correct spot in the sky. The Helix is never very high in the sky from my semirural site in upstate New York, but I can sometimes see an adjacent star, Upsilon (υ) Aquarii, with the unaided eye. Spotting Upsilon will make your nebula search simple. But if your sky is too bright to show that star, try starting at 3.3-magnitude Delta (δ) Aquarii. From Delta, look 4° southwest for 4.7-magnitude 66 Aquarii. It should fit in the same finder field with Delta and shine with an orangish light through the telescope. Continue along that line another 2.8° and you will come to yellow-white Upsilon, the brightest star in the area at magnitude 5.2. The Helix sits 1.2° west of Upsilon and is best sought with a low-power eyepiece. Two 10th-magnitude stars lie halfway between, helping pinpoint the Helix in two easy jumps.

I can pick out the Helix with 50-millimeter binoculars from home. At first glance a small telescope shows only a featureless oval disk, but keep looking. The Helix Nebula yields up its details only to the patient observer.

How Much Can You See?

Left: This fine image of the Helix, acquired by Gary L. Stevens, includes a tiny frame outline that shows the region of the Hubble view. Right: This remarkable close-up, obtained in 1996 with the Hubble Space Telescope, reveals 'cometary knots' whose shells face the nebula’s central white-dwarf star.

On nights of good transparency, my 4.1-inch (105-mm) scope at low to medium power shows a 14'-by-11' oval glow elongated northwest to southeast. The center is slightly darker than the rim. Averted vision (directing your gaze to one side of the nebula) can help you see the nebula better, and O III and narrow-band light-pollution filters often work well. At high power, without a filter, some faint stars can be seen embedded in the nebulosity.

But what about all the beautiful features visible in photographs? While you can’t observe the wealth of colorful detail that appears in deep images, there is more to see than you might think. I’ve read many observing reports and asked folks to tell me the smallest instrument they’ve been able to detect various features in. Let’s see what they have to say.

Amazingly enough, Michael Bakich writes, "From our dark-sky site 50 miles east of El Paso, three of us saw the Helix with the naked eye on August 26, 2000." And in Western Australia, where the Helix passes almost overhead, Maurice Clark and his friends have used its naked-eye visibility as a guide to sky conditions. Others have found it through 6 x 30 finders and described it as easy with small binoculars. The annularity of the Helix has been noted in 2.4-inch telescopes. The central star has been spotted in a 6-inch. 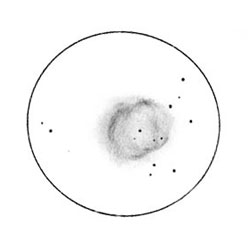 While observing at the Madison Astronomical Society’s dark-sky site near Brooklyn, Wisconsin, Bill Ferris made this sketch of the Helix on September 27, 1995, with a 10-inch f/4.5 Newtonian reflector, Lumicon O III filter, and Meade super-wide-angle eyepiece at 63x. 'The transparency was exceptional that night,' he writes. North is up.

After this we are getting beyond the realm of small scopes, but I know from letters that many readers actually use fairly sizable apertures. Here are a few challenges for those working with larger instruments.

Through 8-inch scopes, the Helix has been seen to shine with a blue-green glow. The human eye is more sensitive to this color than to the reddish hue that dominates photographs. This is why an O III filter improves the view so much; it passes the blue-green light given off by doubly ionized oxygen (designated O III) while blocking the colors common to many sources of light pollution. Irregularities in the brightness of the ring also start to show up with an 8-inch scope.

The two "coils of the spring" have been clearly seen by Bill Ferris in Flagstaff, Arizona, using a 10-inch reflector and O III filter. Like many planetaries, the Helix has a faint outer halo, but it doesn’t show on most photographs. The brightest section emanates from the southeast edge, spirals out clockwise, and fades in the north. While this halo has been suspected in a 10-inch, a 20-inch is the smallest scope I know of in which it has been described as apparent.

Another tough target is the 16th-magnitude galaxy embedded in the northwest edge of the annulus. It is located 1.2' south of the prominent 9.9-magnitude star at that end and has been seen in a 17&frac12-inch scope. What about those radial spokes? The streamers have been seen in a 16-inch and hints of the cometary globules at their ends with a 22-inch.

Many of these observations were made by very experienced deep-sky enthusiasts who frequent the Web-based group Amastro. Some of them observe from darker skies and more southerly latitudes than most of us enjoy, but their accomplishments give us something to strive for. When trying to nab any any of these features, choose nights of good transparency and the darkest sky you can find. 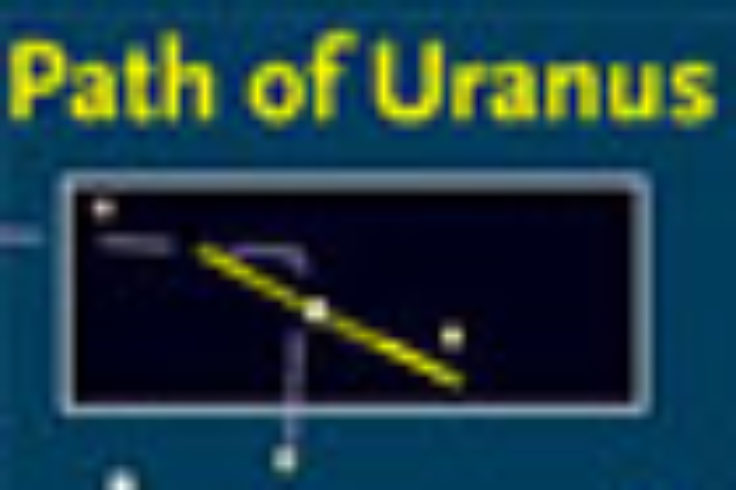