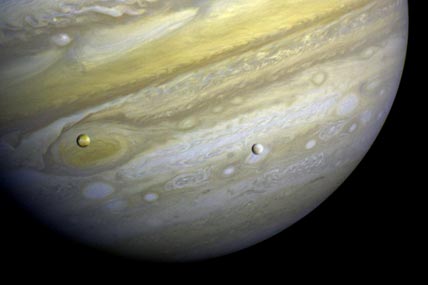 In this false-color close-up view from the Voyager 1 spacecraft on February 13, 1979, Jupiter’s moon Io hovers above the planet’s Great Red Spot while Europa hangs in the foreground to its right. The moons’ disks are not as clearly seen from Earth. Nevertheless, a host of unusual observations can be made whenever two moons line up precisely with Earth or the Sun — something they do often until June 2003.

Jupiter’s four large moons travel in orbits that are tilted only slightly to the plane of the ecliptic, and a popular observing project is to watch in a telescope as they pass in front of or behind the giant planet’s disk. But twice in every revolution of Jupiter around the Sun, or roughly every six years, the satellites’ orbits are presented so nearly edge on to our view that the satellites can be seen going behind or in front of each other. The geometry favoring these "mutual events" lasts for a number of months, and a new season is well underway.

Here we list all the mutual occultations and eclipses of the satellites of Jupiter visible from Earth until the conclusion of this series of mututal events in mid-July.

Because these events normally last just a few minutes, careful timings of them can serve as a valuable check on the mathematical expressions used to describe the moons’ motions over many centuries. (To contribute to such efforts, visit the PHEMU03 campaign Web site.) Even when two moons appear too close to be distinguished in a small telescope, the drop in their combined light can be quite noticeable. Historically, before visits to the Jovian system by the Pioneer and Voyager spacecraft, Earth-based observations of mutual events provided our most reliable clues concerning the surface characteristics of the individual moons.

These events also offer extraordinary challenges for testing a telescope’s resolution and image quality. Each satellite presents a disk only about 1 arcsecond across, so even a weak partial occultation provides a close "double star" whose orientation and spacing change rapidly before our eyes. Today’s digital and video imaging techniques, which need less exposure time than film photography, should be capable of capturing these events with unparalleled clarity.

An Explanation of the Mutual Events Table

In our tables on the following pages (see the sample below), all events are listed by date and Universal Time. The pairs of times immediately after the date give the beginning and end of the partial phase (exterior contacts) of the phenomenon as seen from Earth. These include the travel time needed for the satellite’s light to reach us.

Mutual satellite events can occur in any of six ways, depending on slight differences in the moon's angular sizes and relative positions.

The next column ("Event type") tells, in shorthand notation, which satellite occults or eclipses which other. For example, 4o3 means that satellite IV (Callisto) occults satellite III (Ganymede) by passing in front of it. Similarly, 1e2 means that satellite I (Io) eclipses satellite II (Europa). In the case of an eclipse, the satellites themselves are usually well separated as seen from Earth, but one satellite fades and then brightens again as it passes through the shadow of the other. Sometime these notations are followed by A for annular or T for total; otherwise the event is partial. The six possibilities are shown schematically (left). Eclipses of a satellite in the penumbra (outer fringe) of another satellite’s shadow are not considered here; we list eclipses by the umbra (shadow core) only.

The "magnitude" of an event is expressed by the percentage of the more distant satellite’s diameter that is obscured. In the case of an annular occultation, the magnitude is simply the ratio of the diameters of the two bodies. Finally, the last column in the table gives the duration of the annular or total phase (if any) in seconds. This phase generally occurs near the middle of the time interval specified for the partial phase.

Of course, only some of these events can be seen from a given geographical location. The sole requirement is that Jupiter be above the horizon in a clear, dark sky at the time of an event.

June 8th (second 3e1). Io is in transit over Jupiter when eclipsed by Ganymede (which is also transiting).

June 15th (second 3o1). Both satellites are in transit over Jupiter.

June 22nd (3o1). During this partial occultation, the angular separation between the satellites’ centers undergoes two minima. The first is at 9:45 (with a magnitude of 38 percent), and the second is at 11:17 (37 percent).