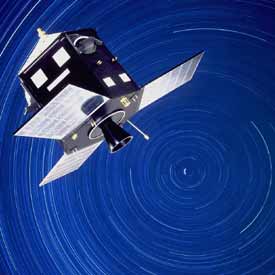 The 1.4-ton Hipparcos satellite operated in space from 1989-93, measuring the positions, distances, motions, brightness and colours of stars. The spacecraft pinpointed more than 100,000 stars, 200 times more accurately than ever before.

On Thursday, December 12, 1996, Michael Perryman's e-mail message flashed across the Atlantic: "There is good news from our side. In a quite remarkable collaboration, the Moscow team took all of the Hipparcos variables and assigned new variable star names to (I think) about 3,000 stars. This development — which we always knew would be last (it had to wait for everything else) — will be a rich addition to the Atlas."

These words, coming from the Hipparcos project scientist, gave Sky Publishing's Millennium Star Atlas team its first inkling of yet another windfall from that satellite (Sky & Telescope: June 1999, page 40). Now we could label thousands of newly discovered variables on our charts using the names by which astronomers of the future would refer to them — even though little was known about these stars yet!

Click to see a comparison chart for FM Leonis.

The task of uncovering their secrets has only just begun. The great majority fluctuate subtly, by 0.1 magnitude or less, and thus can be monitored only with specialized equipment. But that's not true for all of them. Many are quite suitable for study by amateur astronomers with small backyard telescopes or even large binoculars. The satellite caught just tantalizing pieces of light curves for these stars. Now it's time to fill in the details.

Practically speaking, this type of research can't be left to the professionals. Telescope time is in great demand at the major observatories; to divert those instruments to the long-term monitoring of individual stars would be downright wasteful. That's why variable-star work remains a field where dedicated amateurs can do some real science.

Click to see a comparison chart for TX Corvi.

Working closely with the American Association of Variable Star Observers (AAVSO), we at Sky & Telescope are pleased to present our first selection of new Hipparcos variables. The finder charts and comparison-star magnitudes on these pages are just what observers need in order to start figuring out the fluctuations we already know take place. Because these stars vary by a half magnitude or more, even visual estimates can tell a lot. The table on page 5 gives each star's designation, coordinates, and brightness clues from the European Space Agency's Hipparcos and Tycho Catalogues. Every star on this list is well placed for examination on May and June evenings. (Another list of Hipparcos variables can be found in the article "A Treasure-Trove of Variable Stars.")

Click to see a comparison chart for GV Draconis.

Keep in mind that some of these stars may stay constant for months or years before showing any sign of variability. The mere fact that no one noticed their variations in the past argues that they are leisurely performers. The 3½-year Hipparcos mission simply didn't last long enough for their light curves to be established with any certainty.

For example, a well-known star that changes only rarely is Epsilon (e) Aurigae, the eclipsing binary whose companion comes around to hide part of the primary star only once every 27 years! The system then loses half its normal luster for 13 months at a stretch. These episodes, first noticed in 1821, happen only once for each new generation of astronomers. (Don't hold your breath; Epsilon's next eclipse isn't due to start until 2009.)

Click to see a comparison chart for V535 Hydrae.

Similar behavior — a normally constant star with occasional abrupt dips — seems to be what's going on with FM Leonis, V353 Hydrae, and GV Draconis on our list. The Hipparcos satellite viewed any given star on about 100 to 150 irregularly spaced dates during the 1989-93 mission. Astronomers discovered that V353 Hydrae had quite a sharp eclipse around December 18, 1991. When this star will dip again, no one knows.

Other new variables behave quite differently. The light-curve fragment for HS Ursae Majoris, for example, shows a gradual rise in brightness (with minor ups and downs) from magnitude 8.9 at the start of 1990 to an apparent peak of 8.3 in November 1991. The star then faded back to the middle of this range by November 1992. Clearly it's an intrinsic variable, probably irregular, but only by continued monitoring can anyone really know.

Click to see a comparison chart for HS Ursa Majoris.

The best tactic is to familiarize yourself with these stars and get in the habit of routinely checking up on them every clear night. Be prepared to maintain this vigil for many months to come. You might well be the first person to discover what makes one of these "unsolved variables" tick.

The techniques for making visual magnitude estimates are not very demanding. (For more detailed information, see "The Lure of Variable Stars.") Since the stars on our list are 7th to 9th magnitude, they can all be seen in a good pair of binoculars. But if a star is within a couple of magnitudes of the limit for a particular instrument, it can be seen clearly only by "averted vision" — directing your gaze a little to one side.

Click to see a comparison chart for V939 Herculis.

It's easier to compare star brightnesses when you can look right at them. A 3½-inch or larger telescope should guarantee this for the stars on our list, but don't use too large a scope or the field of view will be too narrow. For reliable estimates the variable and comparison stars should appear in the same field and well in from the edges.

Try to select comparison stars that bracket the variable star in brightness, differ from it by less than 0.5 magnitude, and have a similar color. The colors on our charts are an excellent guide for they, like the magnitudes of the comparison stars, are derived from Tycho photometry of the Hipparcos mission. The colors are more vivid than those you will see at night. By convention, comparison-star magnitudes are indicated to tenths with the decimal point omitted. Thus, a star labeled "79" is magnitude 7.9 visually.

What to Do Next

Click to see a comparison chart for KZ Lupi.

Simply entering your magnitude estimates in a notebook may eventually reveal fading or brightening trends or cyclical variations in a star's light. But this effort is wasted unless you follow accepted techniques, like those just described, and communicate your findings to others who are also engaged in variable-star work.

The best way to share your results with professional astronomers and learn from more experienced observers is to join an organization like the American Association of Variable Star Observers, 25 Birch St., Cambridge, MA 02138 USA. The benefits of membership include being in the pipeline to receive the AAVSO's Alert Notices and News Flashes of novae and other stars showing unusual activity, as well as the biannual Journal. To find out how to join, call 617-354-0484 or visit its Web site. This site has links to other variable-star groups around the world.

In recent years, some 600 active amateurs in 40 countries have been sending their observations regularly to the AAVSO. Its database now bulges with nine million magnitude estimates going back to 1902 — a rich resource that professional astronomers consult whenever they need the history of a particular star's variations.

Comparison charts for the four variables listed in the table but not included in this Web article are contained within the original article, available in Sky & Telescope's online archive.