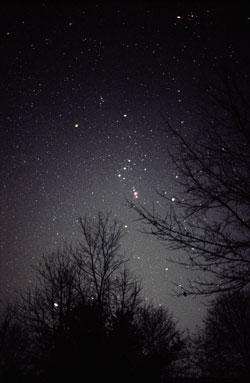 Could you find a new star in this image? Visual nova hunters memorize large patches of sky down to 6th magnitude or fainter. They then scan the patch every night with binoculars searching for erupting stars.

Of all the objects an amateur astronomer can discover visually, the most difficult is a nova. Comet hunters have it easy — it's comparatively simple to find a diffuse, slow-moving glow among fixed pinpoints of light. But a nova — a thermonuclear blast that occurs on the surface of a white-dwarf star in a binary-star system — is merely a "new" star among hundreds of other background stars.

The explosion occurs when gas transfers onto the white dwarf from its cooler, larger companion. The gas causes the dwarf's surface layers to ignite explosively and shine brightly. In a typical nova, the white dwarf can brighten up to 10 magnitudes before fading from view. But the majority of novae are found in the most densely populated region of our heavens, the Milky Way. And spotting a new star among such a crowded background is a challenge. That's why prolific visual nova discoverers are such a rare breed — and why Alfredo J. S. Pereira of Cabo da Roca, Portugal, stands out among the crowd.

Pereira systematically sweeps the sky with 9 x 34 and 14 x 100 binoculars. His discovery credits include three novae found in a span of 21 months. His last two discoveries are especially notable in that they were made 11 days apart in the same constellation less than 3° from one another. On August 26th Pereira found Nova Sagittarii 2001 No. 2 (V4739 Sagittarii) shining at magnitude 7.6 about 45 arcminutes east of Delta (d) Sagittarii; then on September 5th he discovered Nova Sagittarii 2001 No. 3 (V4740 Sagittarii) at magnitude 7.0, about 2° west-southwest of Delta. The feat is unprecedented — many nova hunters spend years between discoveries.

The Challenge of the Search

But Pereira wasn't always so fortunate. He began hunting for novae in 1981 at age 18 but soon gave up because of the daunting difficulty of the task. He resumed his binocular searches six years later but did so only sporadically. It wasn't until 1991 that he started a program of "serious" hunting. And after 500 hours of searching, he was rewarded with his first nova. On December 1, 1999, while searching through an open window in his house, he found Nova Aquilae 1999 No. 2 (V1494 Aquilae) shining at about 6th magnitude. Within a day it had flared to magnitude 3.6.

"I caught [Nova Aquilae 1999 No. 2] just a few minutes after I had started another evening session. I had swept [Scutum], and raising the 14 x 100s [northeast] I scanned central Aquila where I go deep to magnitude 8.5. I had the intention of switching to 9 X 34s since these areas were higher in the sky, but then I saw a bright object that completely disturbed even the main 'skeleton' of my binocular patterns. . . . My heart pounded!"

Bright, naked-eye novae appear about once or twice per decade. Indeed, prior to Pereira's discovery of Nova Aquilae 1999 No.2, Peter Williams (Heathcote, New South Wales, Australia) and Alan C. Gilmore (Mount John University Observatory, New Zealand) independently discovered the brilliant Nova Velorum 1999 (V382 Velorum) high in the southern sky on the night of May 22, 1999. The new star was shining at 3rd magnitude when the two observers noticed it without optical aid; the star reached a maximum brightness of magnitude 2.6 the next day. The brightest naked-eye nova prior to Williams and Gilmore's find was Nova Cygni 1992 (V1974 Cygni), which achieved 4th magnitude in 1992; Peter Collins of Boulder, Colorado, discovered it visually at 7th magnitude. 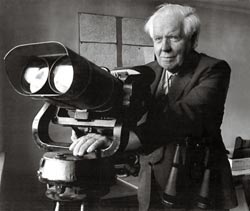 Pereira spends about 1½ hours each clear night (regardless of the Moon's phase) searching for novae. With three visual finds, he follows in the footsteps of the world's two greatest visual nova discoverers — the late George E. D. Alcock of Peterborough, England, and Peter Collins, "the George Alcock of the Americas." Alcock has made five nova discoveries and Collins four.

Like Collins and Alcock, Pereira doesn't rely on traditional star charts to check for novae. Instead he creates his own mini-constellations out of the stars he sees with binoculars and then memorizes their patterns. Alcock pioneered the "mini-constellation" technique decades ago; beginning in the 1950s, he memorized the Milky Way star fields down to about 8th magnitude as seen through 40- and 80-millimeter binoculars. "This stands as one of the great observational feats of the 20th century," says Collins. 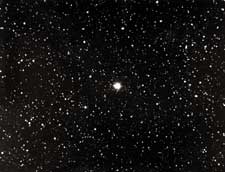 Located about 3° north of Alpha Delphini and today designated as HR Delphini, Nova Delphini 1967 (bright star at center) was Alcock's first. This image by E. Aeppli was taken on September 5, 1967, two months after Alcock's discovery.

To date, Pereira has memorized fields in about 14 constellations. Depending on the richness of the star regions, he searches to either magnitude 7.5 or 9.0. His entire hunting grounds cover some 2,000 square degrees of sky along the plane of the Milky Way, and he has the positions of more than 3,000 stars memorized. If fate continues to shine favorably on Pereira, the 37-year-old amateur has the potential to become the greatest visual nova discoverer of all time.

Despite the outstanding efforts and successes of visual hunters like Pereira and others, the preferred way for amateurs to discover novae is through photographic searches. And the most successful photographic nova hunter in the last decade has been William Liller of Viña del Mar, Chile. Using little more than a 35-mm camera, an 85-mm lens, Kodak Technical Pan 2415 film, and an orange filter, this 74-year-old professional-turned-amateur has discovered nearly two dozen novae — the most recent being a discovery on March 3, 2002, in the Large Magellanic Cloud. 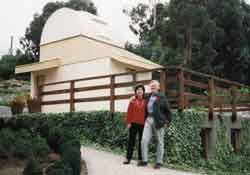 William Liller (seen here with his wife, Matty) uses photography to search for novae. He photographs the sky and then visually compares two images taken of the same field. By flipping back and forth between the older and newer images, he can spot novae that 'blink' into view.

The success of Liller's program — aside from his desire to photograph the Milky Way whenever possible — can be attributed to his use of a homemade, 25-power stereo viewer. One eye looks at the new sky photograph; the other at an archival image. When a star appears in one image but not the other, further investigation is required.

Other searchers use a blink comparator, a device that allows them to display in quick succession two alternating images of the same field taken at different times. The process is called "blinking" because if a nova erupts, its image appears to "blink" in and out of view. Although electronic images taken with CCD cameras can also be blinked on a computer monitor, many nova hunters still prefer a camera and film over CCDs for two reasons: first, a photographic camera lets them record large areas of the sky at one exposure, and second, the cost of film and processing is negligible compared to that of a CCD camera and its ancillary equipment.

Blinking films has been undeniably effective. Besides Liller, a handful of other photographic nova hunters have risen to fame in recent years. Since 1990 Paul Camilleri (Cobram, Victoria, Australia) has discovered nine novae with an 85-mm lens, and several Japanese amateurs have discovered in total some 20 novae. Top among them is Minoru Yamamoto (Okazaki, Aichi, Japan), who has used a 200-mm f/4 lens and Kodak T-Max 400 film to discover six novae.

Other hunters are inventing novel ways to find new stars. Take, for instance, the independent discovery of Nova Cygni 2001 No. 2 (V2275 Cygni) last August 18th by Kazuya Hatayama of Niigata, Japan. Like that of other photographic nova discoverers, Hatayama's equipment is quite simple: a 35-mm camera and a 100-mm f/3.5-5.6 lens. His search methods are also simple. He divides the Milky Way into 85 search areas. Each clear night he shoots 12 of these areas, making two exposures of each region — enough to fill a roll of 24-exposure Fuji Superia 400 film. Each 1-minute-long exposure reaches to about 10th magnitude; the faintest stars recorded vary with atmospheric conditions and light pollution.

Hatayama takes the exposed roll to a photo lab in the morning and picks it up at night, during which he scans the negatives for new stars. "Since I do not have many clear nights," he says, "I have the time to search." What's different about Hatayama's technique, however, is that he doesn't use a blink comparator. He visually scans the negatives in an ingenious way. The first step involves creating a photographic record of the 85 search areas. He selects the best negative of the two exposures he has taken of each area, each selected image becoming part of his growing archive. When he photographs an area again on a later date, he takes the better of the two new exposures, overlays it on the light table with an archived negative, and then shifts the negatives so that the images are ever so slightly out of alignment. Using a loupe, he analyzes each pair of negatives. Since every star should now appear double, Hatayama simply searches for a single star — a new star. "What makes this search method so remarkable," says Shigemi Numazawa, a fellow amateur from Niigata, "is that it is completely simple. It proves you do not need expensive equipment to make a discovery." 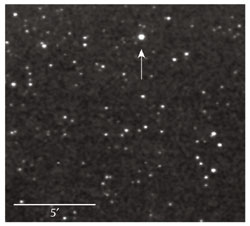 The importance of taking two exposures of each field each night was made evident the night of Hatayama's discovery. The first negative of the field that had the nova in it was poorly guided and no good. He discovered the nova on the second negative, which he overlaid on an image from his archive taken nearly a year earlier. "Understand," Hatayama says, "I was number two. So it's just an independent discovery." Yes, that's true. But, in a sense, Hatayama did make a discovery. For the first time in more than four years of searching, he realized that his method works.

Despite differences in techniques and approach, successful nova hunters all share the same overriding virtue: perseverance. Nova hunters are a dedicated group who demonstrate infinite patience. Discoveries come, but many hunters spend years, even decades, before they uncover a new star they can claim as their own. Still, regardless of the slim number of "new stars" out there, any amateur armed with only determination and a camera or a pair of binoculars can be the next great nova hunter.