Within the narrow bands on this map, some of the best occultations of stars by asteroids in 2002 are predicted to be seen on the dates and Universal Time indicated. For additional events, see the regional maps later in this article. Despite astronomers' best efforts, however, these events still can't be predicted with anything like the accuracy of a total solar eclipse, and the paths shown are subject to slight revision as their dates approach. Here and on the regional maps, paths end in S where twilight is too strong for effective observations, and in A where the star's altitude becomes too low. MR marks moonrise on some paths, while MS marks moonset. Click on the image for a better view of this map. The file is large and may take some time to load.

Planets and their satellites, asteroids, and comets sometimes cover stars in their path. Besides being quite a thrill to watch, such occultations are rarer than the lunar events described in the article "Lunar Occultation Highlights for 2002" because these bodies have a much smaller angular size than the Moon and move more slowly across the sky. The asteroid or satellite need not be visible in a small telescope; it makes itself known when the target star abruptly vanishes from sight.

It is now well established that teams of amateur astronomers using simple timing methods can garner fundamental new data about the size, shape, and atmosphere (if any) of the occulting body. That's why these observations are eagerly sought by the International Occultation Timing Association (IOTA). Today, of course, amazing asteroid shapes and duplicity are also being revealed by radar and by large telescopes using adaptive optics. But the occultation exploits of enthusiastic amateurs yield similar information. The key is coordination — it takes more than three or four "chords" recorded to trace the asteroid's profile. 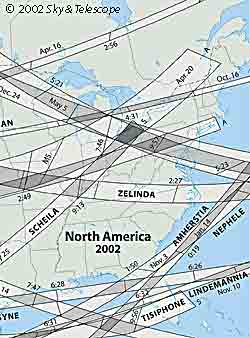 This regional map shows most asteroid-occultation paths predicted to cross well-populared parts of North America. More data about each event is available in tables published in the March 2002 issue of Sky & Telescope magazine. Paths end in S where twilight is too strong for effective observations, and in A where the star's altitude becomes too low. MR marks moonrise on some paths, while MS marks moonset. Click on the image to see the complete map.

This year Sky & Telescope presents an expanded view of upcoming events, aimed at observers worldwide rather than mainly those living in the U.S. Our emphasis is on events visible from populous areas of North America, Europe, Australia, and New Zealand. Only the 61 best events of 2002 can be covered in this article, but many more are accessible with most telescopes. I encourage you to visit the IOTA Web sites mentioned elsewhere in this article to learn of other events visible in your area.

Each occultation can be thought of as the star casting a "shadow" of the asteroid on the Earth's surface. What is plotted on the maps is the path taken as this shadow sweeps across a given continent in a matter of a few minutes. Since the star involved is so much farther away, the asteroid's shadow is only about as wide as the asteroid itself. Most of the occulted stars' positions were measured very accurately in the early 1990s by the European Space Agency's Hipparcos satellite and incorporated in the highly refined Tycho-2 Catalogue, so forecasting occultations is no longer the hit-or-miss proposition it was in the recent past.

That said, most asteroids' orbits are still not known as accurately as we'd like. An element of surprise remains. For asteroids bearing a number higher than 500 or so, a path error of a few hundred miles is still quite possible. Fortunately, we can refine a prediction if the asteroid passes near some Tycho-2 stars a week or two in advance of its occultation. Such updates can be found on IOTA's recorded phone message at 301-474-4945 or in the asteroid section of IOTA's Web site. We often issue a Sky & Telescope AstroAlert as well.

Timing occultations to a fraction of a second is easy using a tape recorder or camcorder and an audible time signal (see "How And Why To Make Occultation Timings", as well as Sky & Telescope magazine, January issue, page 111, and the November 2000 issue, page 110). Such timings are still useful for defining the limits of an asteroid's occultation path, thereby constraining the shape of the object. But observers almost invariably believe their reaction times to be quicker than they really are, a fact proved by modern video data. Since video timings can be accurate to a few hundredths of a second, these are much preferred.

The Calendar Notes section of Sky & Telescope, as well as the Observing Highlights section of this Web site are good places to check for finder charts of the best occultations occurring in a given month. Those for most other events can be found on IOTA's Web site. 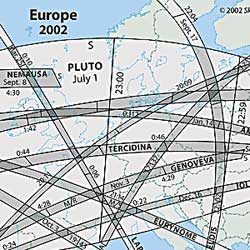 This regional map shows most asteroid-occultation paths predicted to cross Europe in 2002. More data about each event is available in tables published in the March 2002 issue of Sky & Telescope magazine. Paths end in S where twilight is too strong for effective observations, and in A where the star's altitude becomes too low. MR marks moonrise on some paths, while MS marks moonset. Click on the image to see a complete map of Eurpoe.

April 7th, 55 Pandora. Pollux, or Beta (b) Geminorum, is the brightest star that will be occulted by a sizable asteroid during the next 20 years, according to Isao Sato. His latest calculations give a path across northern Honshu, where evening twilight will be rather strong (Sun altitude -7°). The star will be hard to locate in the daytime sky along the path across Asia.

May 6th, 1002 Olbersia. This star is a close double called See 435. The A (primary) component is magnitude 6.70, the B (secondary) 8.04. Separate paths for these components are shown on the world map; the B star is 0.3" northwest of A in position angle 299°.(The position angle, or p.a., is measured from celestial north around through east, south, and west.) No matter where an observer is located, one component will remain visible if the other is occulted. If A is hidden the light will dim by 1.6 magnitudes (which should be obvious), but for B the drop will be only 0.3 magnitude and almost impossible to time visually.

May 28th, 147 Protogeneia. The path extends from southern Texas to northern California.

August 18th, 2 Pallas. The wide path crosses western Iceland, Puerto Rico, Hispaniola, and Panama, but is not plotted on any map to avoid interference with other occultations. Pallas is the second-largest member of the asteroid belt. 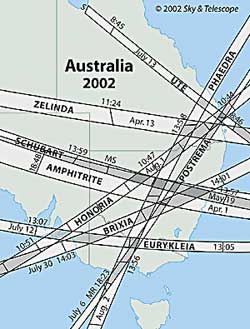 This regional map shows most asteroid-occultation paths predicted to cross eastern Australia 2002. More data about each event is available in tables published in the March 2002 issue of Sky & Telescope magazine. Paths end in S where twilight is too strong for effective observations, and in A where the star's altitude becomes too low. MR marks moonrise on some paths, while MS marks moonset. Click on the image to bring up a map that includes New Zealand.

August 22nd, 98 Ianthe. The star, ZC 3514 or SAO 146954, is a close binary with equal, 6.8-magnitude components separated by 0.10? in p.a. 63°. Since Ianthe is expected to subtend no more than 0.06", one star will shine if the other is covered. The magnitude drop will be 0.7, hard to detect visually if the seeing is bad. Paths for the separate components are shown on the New Zealand map, the only land they cross. Some observers might see occultations of both components separated by about 12 seconds of time.

September 28th, 302 Clarissa. The path extends from Saar, Germany, to Land's End, England, and then from southern New Jersey to western Texas and across northwestern Mexico.

October 16th, 3171 Wangshouguan. The star is ZC 472 or SAO 75810. A gradual occultation of this same star was reported by Henk Bril in the Netherlands on March 9, 1992, indicating it could be a close double.

November 3rd, 680 Genoveva. This Hyades star is SAO 93721, a spectroscopic binary, so the disappearance and reappearance will likely occur in steps.

November 4th, 309 Fraternitas. A lunar occultation once showed this star may be a close double.

December 9th, 77 Frigga. The star is a spectroscopic binary.

December 15th, 42 Isis. Based on his observations of a lunar graze seen on August 23, 1992, Craig McManus says the star may be a close double.

Generally more difficult than asteroidal occultations are those by the major planets, since their brilliance overwhelms most stars. The table below lists occultations of stars by major planets predicted by Edwin Goffin during 2002. The planets are mostly full, with nearly round disks. But on August 15th Venus will be 52 percent sunlit; the star will disappear on Venus's dark side.

The bright planets are easy to find, so coordinates are not given for them. But Pluto is two magnitudes fainter than the star it will occult on July 1st. Much might be learned about Pluto's atmosphere from recordings of that event, the brightest star ever predicted to be occulted by this planet. The target star is at right ascension 17h 01m 52.3s, declination –12° 38' 56" (equinox 2000.0) in Ophiuchus.

Pluto's occultation of a slightly fainter star was recorded in 1989, so information obtained this year will help determine how fast Pluto's atmosphere is freezing as the planet recedes from the Sun. The southern limit of the occultation crosses southern Europe; twilight will be too bright in the northernmost areas. The center of the occultation shadow narrowly misses the Earth, so it will not be possible to observe the atmospheric "central flash" detected at several events involving other large planets in the past.

During the event on November 16th a central flash by Jupiter might be seen from Puerto Rico and other Caribbean locations, as well as from the Cape Verde Islands and adjacent parts of northern Africa.