Here's where to look for RS Ophiuchi in the familiar constellation pattern of Ophiuchus. The dark blue box shows the field of the more detailed close-up chart you get by clicking the image. RS is normally too faint to appear even on such a detailed chart (which has a magnitude limit of 10.0; magnitudes of comparison stars are given there to tenths, with the decimal point omitted). For a wider-field chart showing brighter comparison stars, use the AAVSO's 'A'-size chart.

For first time in 21 years, the famous recurrent nova RS Ophiuchi has erupted into naked-eye visibility. As late as February 10, 2006, the star was still magnitude 11.0, where it spends most of its time with only minor fluctuations. But on the morning of February 13th, there it was shining at magnitude 4.8. The outburst was discovered at February 12.8 Universal Time by Kiyotaka Kanai and Hiroaki Narumi in Japan, who estimated it to be magnitude 4.5 at the time.

RS Oph is located in eastern Ophiuchus near Serpens Cauda. This part of the sky is moderately well up in the southeast just before the first light of dawn. (You can find the time when dawn begins at your site by checking that your location and time zone are correct in our online almanac. If you're not on daylight saving time, which is certainly the case this month throughout the Northern Hemisphere, make sure that the Daylight Saving Time box is unchecked.) 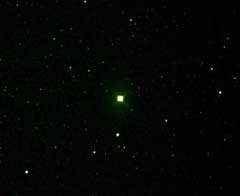 Shining at 5th magnitude on the morning of February 13th, the recurrent nova RS Ophiuchi posed for Ernesto Guido and Giovanni Sostero in Italy as they took its picture with a remotely controlled telescope half a world away at the RAS Observatory of New Mexico. Click on the image for a 1°-wide version. North is up and east is left.

RS Ophiuchi, like other cataclysmic variable stars, is a close binary. A red giant of spectral type M2 is spilling gas onto a small, dense, blue companion star. The hot blue star erupted in 1898, 1933, 1958, 1967, and 1985, and it may also have had an outburst in 1945. According to alerts issued on February 13th by the American Association of Variable Star Observers (AAVSO), RS Ophiuchi last peaked in January 1985 at magnitude 5.2, then declined at an average rate of 0.1 magnitude per day for the next 38 days. It took about a year and a half to fade all the way back to normal.

A 16°-wide comparison-star chart is
available from the AAVSO, which also offers a history of RS Oph and its outbursts.

Both amateur and professional astronomers have been anticipating this event for years. See our article "When Will RS Ophiuchi Next Blow Its Stack?"