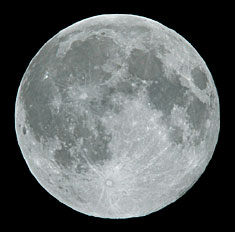 Many Lunar 100 selections are plainly visible in this image of the full Moon, while others require a more detailed view, different illumination, or favorable libration. North is up.

Just about every telescope user is familiar with French comet hunter Charles Messier's catalog of fuzzy objects. Messier's 18th-century listing of 109 galaxies, clusters, and nebulae contains some of the largest, brightest, and most visually interesting deep-sky treasures visible from the Northern Hemisphere. Little wonder that observing all the M objects is regarded as a virtual rite of passage for amateur astronomers.

But the night sky offers an object that is larger, brighter, and more visually captivating than anything on Messier's list: the Moon. Yet many backyard astronomers never go beyond the astro-tourist stage to acquire the knowledge and understanding necessary to really appreciate what they're looking at, and how magnificent and amazing it truly is. Perhaps this is because after they identify a few of the Moon's most conspicuous features, many amateurs don't know where to look next.

The Lunar 100 list, featured in the April 2004 issue of Sky & Telescope is an attempt to provide Moon lovers with something akin to what deep-sky observers enjoy with the Messier catalog: a selection of telescopic sights to ignite interest and enhance understanding. Presented here is a selection of the Moon's 100 most interesting regions, craters, basins, mountains, rilles, and domes. I challenge observers to find and observe them all and, more important, to consider what each feature tells us about lunar and Earth history.

Anatomy of the Lunar 100

Objects in the Lunar 100 are arranged from the easiest to view to the most difficult. This is more systematic than the haphazard approach that produced the Messier list. Indeed, just by knowing a feature's Lunar 100 number, you have some idea of how easy or challenging it will be to see. For example, the Moon itself is L1, while L2 is earthshine and L3 is the light/dark dichotomy between lunar highlands and maria ("seas"). I'd be surprised if anyone reading this couldn't tick those off the list right now. Higher-numbered objects are smaller, less conspicuous, or positioned closer to the limb, making them more challenging to locate and view. 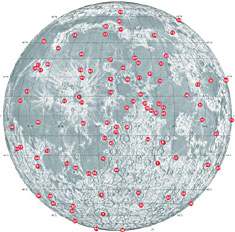 Planetary scientist Charles Wood's Lunar 100 is a list of telescopic sights designed to ignite interest in the Moon and enhance understanding of its geology.

The Messier objects are scattered all over the sky, but all are theoretically observable during marathon nights in March and April every year. By contrast, the Lunar 100 are concentrated in just ½°of sky, yet they can't all be seen in a single night, or even in a single month. Some lunar objects can be observed only with grazing solar illumination, while others are albedo features that require full-Moon conditions to be seen. And others are positioned near (or sometimes even over) the limb of the Moon, requiring a very favorable libration to bring them into view. I don't know how quickly all 100 can be observed, but I'm sure that some competitive amateur will complete it faster than I dare guess!

How big a telescope do you need to view the Lunar 100? The smallest features listed are 3 kilometers in diameter and thus nominally visible in 3-inch (75-millimeter) telescopes employing magnifications of about 150× to 200×. And many can be found with smaller scopes at lower power. But a few Lunar 100 objects — such as narrow rilles — are best seen with 6- or 8-inch telescopes used at high power. The goal, however, is not just to find the objects, but to understand what they tell us abut the Moon.

Any selection of lunar features is bound to lead to many difficult judgments, and I'm sure that at least a few of my choices and rankings will generate considerable debate. Some of my choices were obvious, some were not. Some were influenced by my personal sense of what crater appears more dramatic than another, or which rille best demonstrates an aspect of the Moon's evolution. Aesthetics aside, my choices were principally governed by a desire to include features that tell us something important or interesting about the Moon itself.

I invite you to use the Lunar 100 to guide your explorations of the Moon.

For the convenience of observers, the Lunar 100 is also available on Sky & Telescope's 9-by-12-inch laminated Lunar 100 Card ($6.95), featuring a high-quality Moon map by Antonin Rukl on the front. The reverse side shows the locations and sizes of 100 features, together with brief descriptions of each.