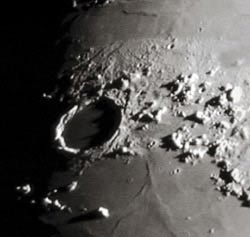 Sunrise on the floor of Plato was captured in this video image made with a 6-inch Maksutov-Newtonian reflector on March 25, 1999. Note the spirelike shadows cast by the peaks on the crater's eastern wall. In a matter of several hours, these shadows shrink to a fraction of the length seen here.

The crater Plato is one of the superstars for observers of the Moon. It is big (101 kilometers wide), conspicuous with its dark floor ringed by a bright rim, and long a subject of detailed scrutiny, speculation, and controversy.

The view through a telescope is especially intriguing because of the irregularity of Plato's rim, as shown dramatically by variations in lengths of shadows cast onto its floor. According to old measurements reported in Thomas Gwyn Elger's 1895 book, The Moon, three peaks on the eastern rim rise 1.5, 1.8, and 2.1 kilometers above the floor. On the western rim an obvious, large triangular massif is partially disconnected from the crater rim. This 15-km-long block, and another one farther north, resulted from giant landslides, where segments of the rim slid slightly inward, creating a scallop — a bite out of the circular rim. Variations in rim height and width may thus be due to slumping, but the height differences on Plato's east rim must be of older, unknown origins.

One Plato mystery with a simple solution is its lack of a central peak. Compared to other craters of similar size, Plato should have a 2.2-km-high mountain rising from its floor. However, since Plato is filled with a 2.6-km layer of lava, the peak is buried. 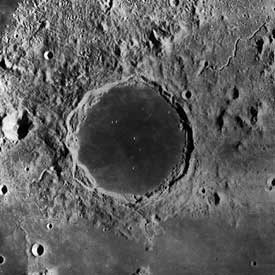 How many craterlets can you see on Plato's floor? Although some observers have reported dozens, only four craters are sufficiently obvious to be seen with moderate telescopes even when observing conditions are steady and the illumination angle is favorable. The largest of the four measures 2.2 kilometers across.

For more than 100 years the floor of Plato has been the focus of intense quasi-scientific debate over suspected lunar changes. Three types of observations caused controversy: detection of small craters on Plato's floor, variation in floor darkness with changing Sun angles, and obscurations of the floor itself. Because the floor possesses a few small impact craters near the limit of visibility with small telescopes, there have been unofficial contests to detect the largest number of craters. Harvard astronomy professor W.H. Pickering apparently won in 1892 by announcing his mapping of 71 spots on Plato's floor. Comparison of hand-drawn maps with high-resolution photographs obtained by the Lunar Orbiter 4 spacecraft in 1967 demonstrates that the observers did detect the four largest craters, and some of the smaller ones, but their estimates of sizes, locations, and numbers were often seriously in error.

Craterlets were not the only source of controversial observations. According to Elger, "The gradual darkening of the floor of Plato as the sun's altitude increases from 20° till after full moon may be regarded as an established fact, though no feasible hypothesis has been advanced to account for it." Actually, just the opposite is true, according to measurements of the floor's brightness by sensitive photometers mounted on large telescopes. Like the rest of the Moon, Plato's floor brightens until near full, when it rapidly gets much brighter, and then darkens after full Moon. 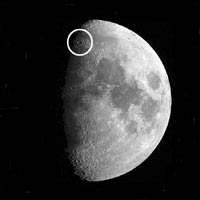 The third of Plato's controversies concerns reports that the dark floor is occasionally obscured by mists or clouds. Most of the observations were made during the last century; Walter Goodacre's 1931 book, also called The Moon, mentions that there are "a number of well authenticated cases." Descriptions include a fog that cleared as the Sun rose, a "curious luminous milky kind of light," and a nondescript lack of detail. Another 19th-century observer found that the floor was covered by myriad points of light, "as if reflected from flocculent clouds lying near the surface."

In contrast with these visual observations, in none of the many photographs taken by space probes or by large telescopes have there been obscurations of Plato's floor. Perhaps, like UFO's, only believers see them.