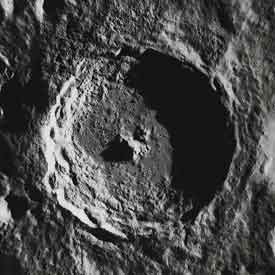 In August 1967, the Lunar Orbiter 5 spacecraft obtained this image of Tycho. It reveals regions of striated hills interspersed with smooth ponds. The ponds, most visible on the eastern (right) edge of the crater's outer wall, are interpreted as impact-melt material that splashed all around Tycho and flowed off hills and collected in low spots.

Tycho is grand. It is the most conspicuous crater visible near full Moon, shining brilliantly, surrounded by a dark ring, and radiating great long rays. If we get away from the full Moon glare so that its morphology can be seen, Tycho is revealed as the prototype of the large complex impact crater with terraced walls, flat floor, and conspicuous central peaks — truly "the Metropolitan crater of the Moon," as Thomas Gwyn Elger called it in his 1895 classic, The Moon.

Tycho is 85 kilometers wide, 4.8 km deep, with a 2.25-km-high central peak. Its floor is relatively smooth on the east side, but there is a sector of roughness radiating from the central peak to the west wall. Early examination of very-high-resolution Lunar Orbiter images showed rough textures and domelike features that were thought to be of volcanic origin. But growing recognition of the widespread existence of material totally melted by the great energy of impact in and around fresh lunar craters led to impact melt as the accepted interpretation. It appears that both the smooth and the rough portions of Tycho's floor are impact-melted debris that veneer the original surface. 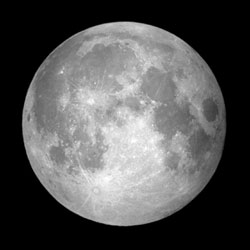 When the Moon is full, the great crater Tycho is one of the most conspicuous lunar features. It's circled by a gray halo extending out from the rim about one crater radius. As the Moon waxes from eight days old to full, Tycho's appearance changes dramatically from that of a great gaping crater to the epicenter of a fantastic ray system.

No other rayed crater has such a conspicuous dark collar. The dark annulus maps out the distribution of a nearly continuous veneer of dark, glassy impact melt. Tycho has such a conspicuous nimbus because the crater is so young that its melt deposits have not been pulverized and mixed in with surrounding rocks by myriads of small impacts. That steady process also contributes, in a billion years or so, to the removal of bright crater rays. The Moon deplores extremes of brightness.

Tycho is very young — its rays are draped over all sorts of lunar features — but just how young is it? One way to find out is to count the number of impact craters that have appeared on Tycho since its formation. In 1970 William K. Hartmann, then a young scientist at the University of Arizona, and I made those counts and used the rate of crater formation derived from dating the Apollo 11 mare samples to infer that Tycho formed about 200 million years ago. Later, this date was refined to 109 million years, based on the radiometric dating of material collected at the Apollo 17 landing site from the base of a landslide that was apparently initiated by the impact of Tycho ray material. As far as is known, Tycho is the youngest large crater on the Earth-facing side of the moon. 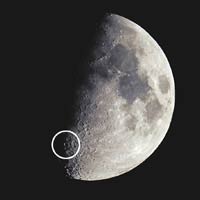 The rays from Tycho that partially encircle the full Moon are not distributed equally in all directions. Look with binoculars or with a low-power telescope near full Moon and you will see bright rays that streak off to the lunar east, south, and northwest, but no bright ones go to the west. Also notice that the large nimbus of white material surrounding Tycho is twice as wide to the east as to the west. This wonderful example of a perfect crater must have formed from an oblique impact! When an impacting projectile skims in over the surface at angles less than 45°, ray material is concentrated in the so-called downrange direction. Thus, the Tycho impactor, probably 8 to 10 km wide, came in low over the Moon's western horizon. On Earth, 109 million years ago, dinosaurs and other reptiles must have witnessed this devastating collision and perhaps suffered a few days later when fist-sized pieces of Tycho ejecta hit the Earth.