The Story Behind the Shot: "Super Blood Wolf Moon" Eclipse of 2019

Reader Michael Rossacci shares the story behind his capture of the January 20, 2019, total lunar eclipse.

When in New England, you’ll often hear, “If you don’t like the weather, just wait five minutes!” Never did that line prove so true as on January 20th. During the day, snow and a deep freeze blanketed the Boston area, thanks to a dipping polar vortex. For many weeks, I had had high hopes of photographing this unique event in its entirety. However, as Old Man Winter dug deeply into the region, I had mostly lost hope. Every time I checked, the hourly forecast predicted that skies would clear starting at 2 a.m. — after the whole spectacle had already taken place.

As luck would have it, around 9 p.m. that evening, I noticed a bright ambient light outside. I assumed an animal was triggering our motion-sensor light. But when I peered outside, I found that my spotlight was off — instead, a beautifully bright full Moon was lighting up my back deck. Like a madman, I ran to my closet and grabbed my camera gear and started assembling it. Now the only obstacle that remained was dealing with single digit temperatures (minus the wind chill factor) that would accompany me for the next several hours. But I certainly wasn’t about to complain — thank goodness for changeable weather!

I had gone out a few nights before to figure out what elevation angle I would need during each stage of the eclipse. My arsenal of camera gear included a Canon EOS 7D with a 300-mm f/2.8 lens and 1.4x tele-extender on a tripod, which happens to be my nature photography rig. My support gear consisted of a Really Right Stuff TVC-33 tripod together with a BH-55 ballhead. The unsung hero, as far as gear goes, was the cable release, which could trip the shutter without adding any vibration — a key requirement during totality.

Whereas the elevation angle for the last lunar eclipse in 2015 only surpassed 45°, this one would stress the equipment’s limits. The main alignment challenge was to achieve the required 67° elevation angle at totality while keeping my rig steady. Although my ballhead only allows for a maximum elevation of 45°, it’s equipped with a drop-down notch for vertical compositions. After maneuvering my camera into the drop-down notch and locking down my ballhead, my panning knob became my elevation knob and allowed me to comfortably achieve the elevation angle I needed. For azimuth placement, I rotated my tripod legs so that my lens barrel roughly lined up with the moon.

And so it began, a series of the following steps: (1) head outside with my gear, (2) plant my tripod legs firmly on my snowy deck, (3) set the elevation angle, (4) set focus, (5) get a base exposure, (6) check histogram, (6) take several shots waiting for the opportunistic lulls in the wind and finally, (7) head back in to warm up. During the 2015 eclipse, I only shot from horizon-break to totality. I regretted missing the second half of the eclipse, so this time I was determined to capture the event’s overall symmetry.

The composite image above summarizes my view of the event as it progressed through the penumbral, partial, and total eclipse phases. To produce this image, I processed individual images in Adobe Lightroom before assembling them into a single composite in Photoshop. My base exposure started at f/8, 1/200 sec, ISO 100, and I adjusted accordingly as the Moon dimmed; totality which was the most challenging exposure.

I must say, it was well worth the effort to photograph this event. With the weather turning in my favor, I was able to collect several images during each phase of the eclipse to fill in the symmetry I was ultimately seeking. As I made my way through the penumbral and partial eclipse phases, my adrenaline really started pumping and I found myself in tune with the night sky. At the same time, I also started feeling more and more pressure not to mess up any camera settings or focus. Throughout the night, the biggest challenges were dealing with the weather and pointing with a steep elevation angle. Having good working knowledge of my support gear really paid dividends in making the shoot successful.

Shortly after 2 a.m. I packed it in for the night, backed up my precious images, and stowed my gear. As I finally crawled into bed, looking forward to all the cool image editing I would be doing later that morning, I couldn’t stop thinking about that oft-said New England quote.

Thanks for the report and images here of the total lunar eclipse in Cancer during January this year. It brings back memories (I logged my observations) using my 90-mm refractor telescope with 14-mm eyepiece. 71x view with nearly 1-degree true field of view so the Moon comfortably fit into the eyepiece field of view. It was spectacular and I enjoyed checking Sky & Telescope crater timing predictions published in the January magazine issue and logging. Brutal observing conditions though from 2200-0135 local time in Maryland, many other locations similar. 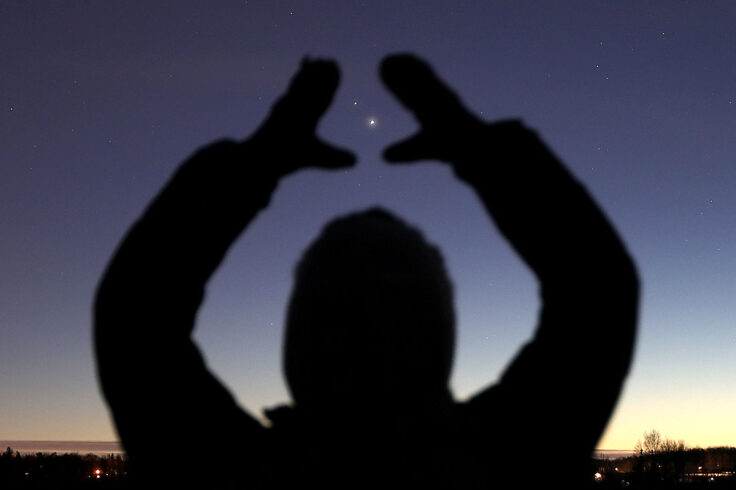