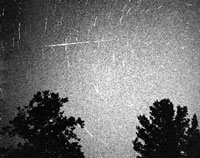 One of the 25 million meteors that strike the Earth's atmosphere every day. This bright Perseid was photographed by Bruce Atwood of Rockford, Illinois, on the morning of August 13, 1971. It flared near the end of its 23° flight after crossing the bright trail of Theta Draconis.

Edward Claudius Herrick was a bookworm. His father was a Yale graduate and founder of a girls' school. His mother was a descendant of one of Yale's founders. The Herricks lived in New Haven, Connecticut, the home of Yale.

But young Edward did not go to Yale. He did not go to college. His parents felt that his chronic eyelid inflammation would keep him from succeeding in higher education. So in 1827, at the age of 16, Edward became a clerk in a bookstore that served Yale students and faculty and was also the college's publishing house.

Everyone in New Haven with intellectual interests stopped by the bookstore, and Herrick reveled in conversations with professors such as astronomer Denison Olmsted and chemist Benjamin Silliman. The young clerk worked hard, and by age 24 he had become one of the bookstore's owners. Unfortunately, business stalled over the next three years and left Herrick broke. 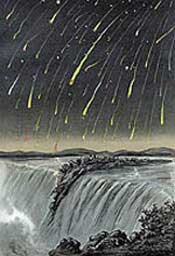 One of the few early color representations of the 1833 Leonid storm over North America appeared in Bilderatlas der Sternenwelt, published in 1892 by Edmund Weik, University of Vienna, Austria. The illustration depicts the meteors over Niagara Falls.

On the evening of August 9, 1837, just as his business was teetering toward collapse, Herrick observed an unusual number of meteors in the night sky. From people who had stayed up very late that night, he heard that the meteors were even more numerous and brilliant after midnight.

American astronomers in 1837 were still gripped by the excitement of the epic meteor deluge that had taken place four years earlier. On the night of November 12-13, 1833, more than a thousand shooting stars per minute had been seen radiating from the constellation Leo (Sky & Telescope: November 1995, page 24). Astronomers had been taken completely by surprise; it was the first time that most of them had paid attention to meteors at all. They were especially startled by Olmsted's demonstration that the shower's meteors must have been flying together in parallel from a distant region of space. Most astronomers had believed that meteors were mere atmospheric phenomena, to be ignored like clouds and weather.

Now astronomers were searching historical records and turning up accounts of previous mid-November meteor showers. But to observe abundant meteors in August? That seemed odd.

Yale professor Denison Olmsted (1791-1859), an associate of Herrick's, proved that the meteors in the Leonid storm of 1833 had come from deep in space, thereby bringing meteors into astronomers' realm of study.

Herrick, alert and opportunistic, started looking for reports that his August 9th display had been seen from places other than New Haven. He also searched historical sources for evidence that August meteors had been seen in previous years around the same date. He found seven cases, from 1029 in Egypt to 1833 in England.

Following Olmsted's example, Herrick wrote an article for the January 1838 issue of Silliman's American Journal of Science and Arts in which he proposed the existence of a second annual meteor shower. He listed his evidence and asked for information from anyone else who had seen the display.

While his first article was being published, Herrick turned up four more accounts from other years of meteors plummeting through the skies on August 9th or 10th. He was convinced.

"There generally occurs on or about the 9th of August in every year," he wrote, "a remarkably large number of shooting stars."

Herrick discarded notions that meteors were meteorological, like lightning or rainbows, or debris falling back to Earth after the eruption of a volcano. "Shooting stars are without doubt cosmical or celestial bodies," he wrote, "and not of atmospheric or terrestrial origin." What could that source be?

"It is not impossible," Herrick wrote, "that these meteoric showers are derived from nebulous or cometary bodies which, at stated times, the earth falls in." Here was another correct insight, one that Olmsted had broached. The hypothesis that meteors have a cometary origin was confirmed 28 years after Herrick's article, when the connection between meteor and comet orbits was demonstrated.

Pleased with his achievement, Herrick wrote up the new evidence for his annual August shower, included his theories about of meteors, and gave the paper to Silliman for publication in his journal. Less than two weeks later Herrick received crushing news. He was not the shower's discoverer after all.

As so often happens in science, others were working along the same lines independently just months apart. The 1833 Leonid storm had galvanized interest in meteors, and the time was ripe. Adolphe Quetelet, a Belgian statistician and founder and director of the Brussels Observatory, had mentioned mid-August meteors very tentatively six months earlier. His attention had been called to meteors by François Arago of France, who dominated European science at the time with his skill in discerning important scientific problems and suggesting experiments to solve them. What, asked Arago in the wake of the 1833 display, constituted a shower of meteors, and what was the rate of the ordinary, everynight drizzle?

Edward C. Herrick (1811-62) was an enthusiastic participant in the birth of meteor science. He was the most diligent and thorough of the three independent discoverers of the Perseid shower between 1834 and 1837.

The problem was ideal for Quetelet, whose passion was statistics. In a speech to the Royal Academy of Sciences and Arts of Brussels on December 3, 1836, Quetelet gave his answer: averaged over the night and year, a single observer should expect to see eight sporadic (nonshower) meteors per hour. That figure is still good today. After his speech Quetelet made a brief mention of unusual August meteors, and in his 1836 annual report of the Brussels Observatory he presented the idea timidly and almost in passing: "I thought I also noticed a greater frequency of these meteors in the month of August (from the 8th to the 15th)."

By the following year, Quetelet had accidentally found records in his observatory of exceptional meteor displays on August 10th of 1834 and 1835 to accompany the increase he had seen in 1836. He called for scientists at the March 4, 1837, session of the Royal Academy of Brussel to watch the sky on August 10, 1837.

Herrick stumbled onto another annual meteor shower that occurred around December 7th, the Andromedids or Bielids (so named much later, in 1872, for their association with Biela's Comet). This was fun, discovering meteor showers. Herrick called for worldwide observations all night and year round. He also offered some practical advice. "Shooting stars must always be watched in the open air: observations through a window can not be trusted."

When the following August (1839) came around, Herrick and three friends concentrated on determining the radiant of their favorite shower. They concluded that the August meteors appear to come from Perseus — and were right.

But again Herrick's discovery was not the first. This time he was five years too late.

Locke and the Perseids

John Locke, a physician and girls'-school headmaster in Cincinnati, Ohio, was the first person to discover that the August meteor shower comes from a radiant in Perseus.

On August 11, 1834, the Cincinnati Daily Gazette published a letter to the editor from John Locke, headmaster of a girls' school. (Locke was about to begin, at age 43, a highly productive career as a physicist, geologist, and scientific instrument maker.) Locke had seen a meteor shower on the evening of August 9th and, impressed with Olmsted's writings on the radiant of the Leonid storm less than a year earlier, watched the display carefully and detected that it too had a radiant. It was in Perseus (true), near the star Algol (about 17° too far south).

Locke's letter in a small newspaper on the Western frontier went completely unnoticed. But he read and contributed to the scientific journals and was angry when Herrick and Quetelet gained acclaim for discovering both the August meteors and their radiant. He wrote to Silliman (for whom he had once worked as a lab assistant) claiming credit and snubbing the later discoverers. Silliman passed the letter to Herrick, who immediately wrote up a notice for the American Journal of Science and Arts acknowledging Locke's observations. So now there were three independent discoverers of the Perseid meteor shower.

Well, not three after all, it turned out. Thousands.

The Tears of Saint Lawrence

The earliest discoverers of the Perseids were anonymous, and their feat lay buried in an English farmer's almanac. Both Quetelet and Herrick chanced upon it. Bravely, Herrick acknowledged, "The annual occurrence of a meteoric display about the 10th of August appears to have been recognized for a very great length of time." Thomas Furley Forster of London had recorded it in 1827 in his Pocket Encyclopaedia of Natural Phenomena. "According to Mr. T. Forster," Herrick reported in October 1839, citing Quetelet, "a superstition has 'for ages' existed among the Catholics of some parts of England and Germany that the burning tears of St. Lawrence are seen in the sky on the night of the 10th of August; this day being the anniversary of his martyrdom."

On August 12, 1993, J. F. Funderburg photographed this bright Perseid streaking past the Andromeda Galaxy (fuzzy trail just above the meteor's center). Due to precession, the Perseid shower arrives a few days later in August than it did a century and a half ago.

Saint Lawrence was tortured and killed in Rome on August 10, 258, during the reign of the anti-Christian emperor Valerian. "The peasants of Franconia and Saxony have believed for ages past that St. Lawrence weeps tears of fire which fall from the sky every year on his fete (the 10th of August)," Herrick wrote, quoting a Brussels newspaper. "This ancient popular German tradition or superstition has been found within these [past] few years to be a fact which engages the attention of astronomers."

Herrick never seemed bitter about being repeatedly upstaged. He continued to tend his August meteors with great faithfulness and to report their activity in Silliman's journal all the remaining years of his life.

In 1838, soon after his first scientific articles appeared in print, Herrick lost his bookstore. But Yale was so impressed by his scholarship that it awarded him an honorary master of arts degree. Five years later, Yale built a new library and made Herrick college librarian. It was a pleasant irony for a man whose eye trouble had kept him from college and who had complained about New Haven's poor libraries. Herrick spent the next 15 years vigorously developing the Yale library collections. He never married. He never took a vacation.

Later he assumed the duty of writing and publishing Yale's obituaries of graduates and faculty. Herrick was so organized and efficient that he wrote his own death notice a few days before he died in 1862 at the age of 51.