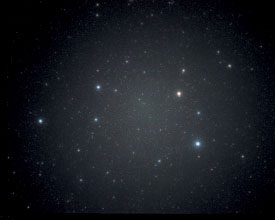 Within the constellation of Leo, the Lion, lies the bright Mira-type variable R Leonis, an ideal variable for beginners. The location of R Leonis is pinpointed in a chart on the next page.

Astronomy is often called the one remaining science where amateurs can still contribute to front-line professional research. When someone asks how, the first example always cited is variable stars. For more than a century, amateurs have collected nearly all the brightness data on record for hundreds of variable stars of several major types.

The future is shaping up to be different. Today's digital equipment is poised to revolutionize variable-star data-taking. A CCD camera on a small telescope, combined with cheap, powerful image-analysis shareware, can measure magnitudes of much fainter stars much more accurately than can be done by eye. More significantly, automatic wide-field surveys already have the potential to measure the brightnesses of millions of stars covering the whole sky several times a night while astronomers sleep (Sky & Telescope: October 1995, page 13).

Amateurs, however, are working to keep up. They are playing leading roles in CCD photometry (precision light-measuring). And the amateur-oriented American Association of Variable Star Observers (AAVSO) could find itself assuming the role of world archive and data manager for the tidal waves of nightly (or even hourly) automatic survey data that will crash over astronomers in the future.

That time may still be years away. And even when it arrives, useful roles will always remain for visual observers — at least for bright stars that have been watched for decades — using simple backyard telescopes the way they have for generations.

Most amateurs begin astronomy just as sightseers, and eventually they reach a plateau. After a few months or years of pleasantly touring the celestial scenery, they may feel a need for more meaningful involvement. After all, a tourist can't be expected to gape at the Grand Canyon forever. Lasting enthusiasm, in astronomy as in anything else, comes from purposeful activity. For thousands of people during the last century or more, variable stars have provided that outlet.

If you've never tried your eye on variable stars, do a simple project tonight (assuming it's before sunrise in September or October, 2003). If you can find the Sickle of Leo you can find R Leonis, one of the brightest red long-period variables. It brightens and fades between magnitudes 5 and 10 over a cycle of 312 days on average — about 10 months. A small telescope or even binoculars are all the equipment you'll need. (For a selection of bright targets available at various times of year, see "The Top 12 Naked-Eye Variable Stars.") 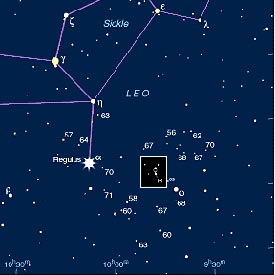 As Leo climbs the eastern evening sky in late winter and spring, countless skywatchers check in on the Mira-type variable star R Leonis. Its brightness and location near Regulus make it an ideal starter variable for beginners. R forms the south end of a little chain of three stars 50 west of Regulus. This chart of AAVSO comparison stars goes as faint as magnitude 7.3. Their magnitudes are given to the nearest tenth with the decimal points omitted. The black rectangle shows the area contained in the chart below.

The first step in variable-star observing is finding the star. As shown on any chart that shows all stars down to 6th magnitude, R Leonis lies 5° west of bright Regulus very close to the pair of 6th-magnitude stars 18 and 19 Leonis. The low-power view in most finderscopes or binoculars shows them barely in the same field as Regulus. Work your way west from Regulus, carefully comparing the brightest star patterns on the chart to what you see. Be sure to use a correct-image finder, not one that gives a mirror image (take out any right-angle star diagonal).

If you have trouble finding your target star, make sure you know the size of your instrument's field of view, and make a wire ring of that size using the degree scale on the edge of your chart. Slide the ring across the paper to preview what star patterns will cross your eyepiece.

Be sure to turn the chart so north matches north in the eyepiece. Push your instrument slightly toward Polaris; north is the side from which new stars enter the field of view.

One help in identifying R Leonis is its deep orange-red color. Like other Mira-type variables, it is a pulsing red giant of spectral type M. It contrasts vividly with bluish white 19 Leonis (spectrum A3) and golden yellow 18 Leonis (gK4). 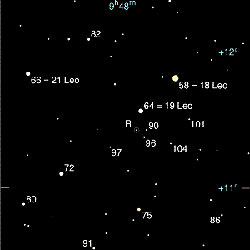 This is a close-up map of R Leonis's immediate neighborhood, with comparisons to magnitude 10.4. North is up and east is left.

Many comparison stars around R have their magnitudes printed on the maps on this page. The magnitudes are traditionally given to the nearest tenth with the decimal point left out so that it won't be confused with a faint star.

Once you've identified the variable, find a comparison star that looks just a little brighter than it and one that's just a little fainter. Look back and forth among the three and judge where the variable's brightness falls with the respect to the two comparisons as best you can.

Don't be discouraged if at first you can hardly distinguish brightnesses 0.3 or 0.4 magnitude apart. Brightness estimating is a skill honed by practice and experience. But be warned: once you start, it's addictive. The second estimate of a particular star is much easier than the first, and the more familiar you become with a star the greater your curiosity will be about what it's doing tonight.

Repeated estimates over many days or weeks will provoke a desire for greater accuracy. If your observations show a scatter of 0.5 magnitude, you'll soon be burning with curiosity about whether the star really changes that much or whether it's all in your eye. As elsewhere in science, the most interesting data usually show up right where the errors of measurement begin to hide everything. Here are some methods that, when good comparison stars are available, will help you reduce your average error to 0.1 magnitude or even a little better. Do them well, and you'll get a feeling for issues of measurement accuracy and error analysis that are central to every branch of science.

Face the star without preconceptions. Wipe your mind clean of what the variable "ought" to be doing; record exactly what the eye sees. If you brood on the fact that the star can't possibly have jumped 0.5 magnitude since last night, you may try to "correct" your impression of it. This is the worst thing you can do to your accuracy, and it's worth understanding why.

Error in scientific measurement falls into two categories, random and systematic. Random error tends to cancel out in a predictable way after a while, just the way a coin will come up closer and closer to 50 percent heads the more times it's flipped. Systematic errors are those that never cancel out — for instance, if one side of the coin is weighted — and therefore they are more insidious. In the case of variable-star observing, systematic error corresponds to bias in the observer's eye and brain. So if you record exactly what you see without bias, your errors are more likely to be only random, and you can have faith that they will actually average out closer to the truth than any "improvement" you fudge.

Of course, be quick to throw out any estimate that you think results from some actual mistake or carelessness.

Center the stars in the field of view. Place the two you're comparing an equal distance from the field's center, or if this brings them near the edges, move each one to the center and examine it in turn. This is needed because some instruments don't fully illuminate the edges of the field — an effect known as vignetting — so stars near the edge are slightly dimmed. Vignetting is most likely at a telescope's low power, where variable-star work is usually done. Another reason for doing this is that the same star might look subtly different when it's near or far from the black edge of the eyepiece's barrel.

Keep your eyes moving. Scan back and forth between the stars you're judging, constantly checking and revising your impressions. If the variable seems to be a third of the way in brightness from star A to B, try to convince yourself that it's a quarter of the way, then halfway. Is it equally easy to talk yourself into each opinion? Then the truth probably lies between them. If one seems more plausible than the other, shift the assumption you started with and test on either side of it again. This testing of the uncertainty limits is called bracketing an observation, and you should try to make it a habit.

Use the out-of-focus method. It's easier to compare the brightnesses of disks than pinpoints, so twist the focus knob. The brighter the stars, the farther out of focus you can take them.

Choose variables of optimum brightness for your instrument. Stars within about a magnitude of a scope's limit all tend to look alike. Conversely, very bright stars won't have good comparisons nearby; in this case you'll have to go to a smaller instrument with a wider field. The naked eye is the best viewing system down to about magnitude 4, binoculars or a good finderscope down to 7 or 8.

Quirks of the human eye. Beware of three potential sources of error. (1) The Purkinje effect in the retina makes red stars grow brighter (compared to white ones) the longer you stare at them, another reason to keep your eyes moving. (2) Moonlight and light pollution also make red stars look too bright; against a gray background they stand out more than white stars do. Use extra caution under bright skies and mention the observing conditions in your notes. (3) Viewing angle. A star looks brighter in the lower part of your vision than in the upper part. Tilt your head so the line joining your eyes is parallel with the line joining the two stars you're comparing.

All this may seem like a lot to keep in mind. But with time it becomes automatic. Devoted variable-star observers become so familiar with their procedures that they cover dozens of stars a night, swinging from one to the next while hardly looking at their charts.

There's one issue you can't do anything about: your age. The human eye lens yellows over the years, making red stars seem increasingly brighter compared to white ones. This effect may be responsible for a lot of the scatter appearing in AAVSO light curves that combine estimates by many observers. Each person's estimates, however, will be self-consistent for many years at a time, and the potential exists for sorting out effects of different observers' changing eyes (given enough archived observations) and correcting the data base accordingly. As is so often the case in science, good data gathered now may be used far in the future in ways that no one yet imagines.

The "Refining Your Technique" section is the best advice for beginners.