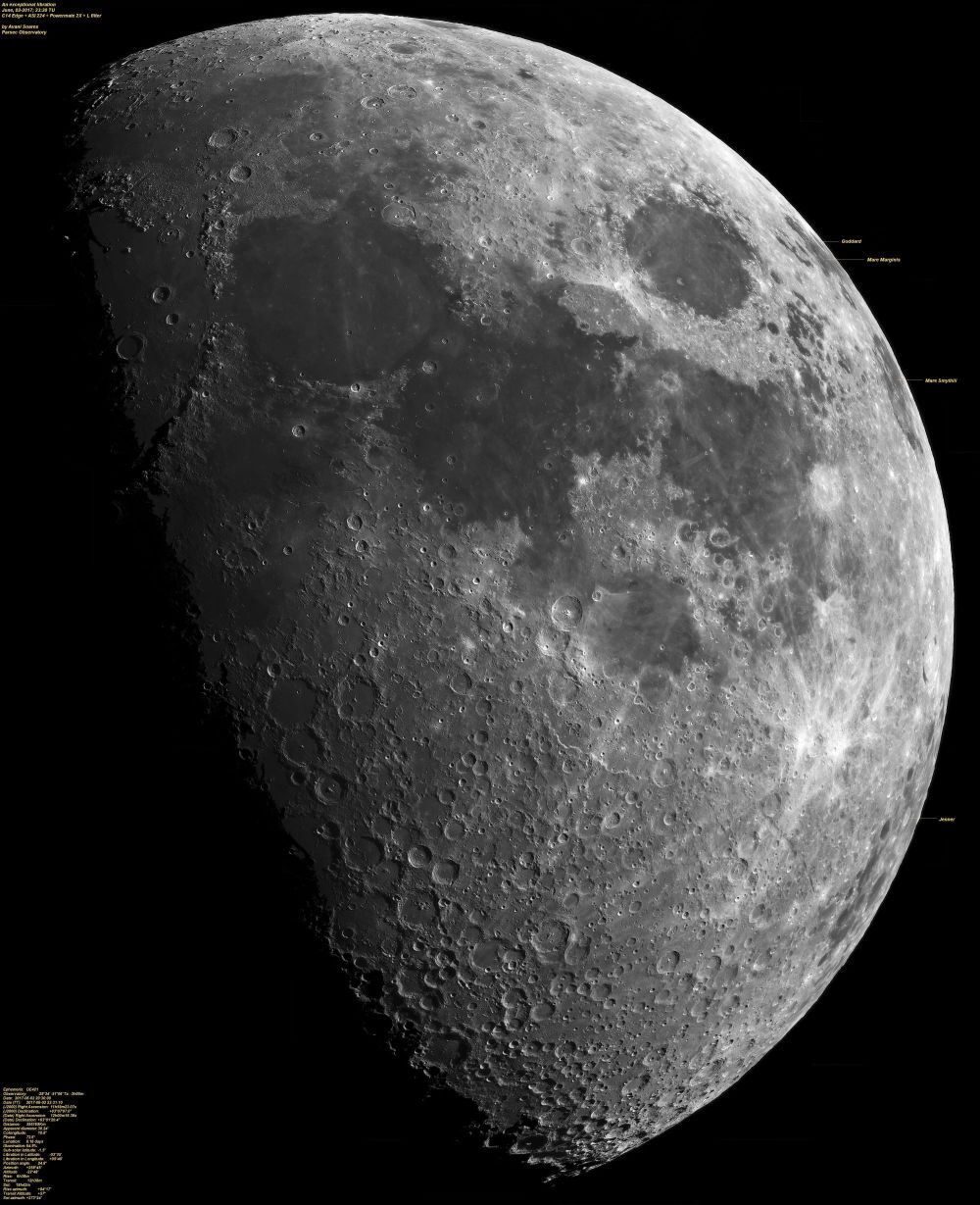 An exceptional hover! Http://www.astrobin.com/full/300057/0/?nc=astroavani&real=&mod= Long ago I was chasing a picture like that, but something was always wrong. The phase was not good, the seeing did not remain stable, it was missing a little bit or there was simply some gross error of capture that put everything to lose. This time however I do not have to complain, everything fit perfectly to get this wonderful photo. It was not enough just to be a good photo, I had the luck of a very favorable libration in longitude east because Mare Marginis and Mare Smythii are hardly visible in their totality, but in this photo the conditions were so favorable (5º48 ') that you can see On the horizon the mountains on the other side of Mare Marginis. Several craters that are not observable under normal conditions can be seen here as Goddard alongside Mare Marginis and Jenner with their characteristic central peak perfectly visible in the photo. What is lunar hovering motion? The Libration movement is due to the non-perfect synchronism of the rotation and revolution of the Moon, which allows us to observe about 9% of the lunar face (the boundary zone of the hidden face) opposite the Earth, which is invisible when we observe the Moon Our position on Earth. The hovering occurs due to the actual or apparent displacement (oscillation) of the lunar axes relative to their average positions. Consequently, this "reeling" of the Moon allows us to see 59% of its surface at certain moments. These maximum hovering moments that alternate between North, South, East and West Libration, whether in latitude or longitude, offers us an interesting Opportunity to make observations and images of these lunar regions still unknown to most of us. There are 3 types of hover: hover in longitude, hover in latitude and daily hover .. Libration in latitude - It is effect of the inclination of the plane of the lunar orbit relative to the plane of the terrestrial orbit. Longitude Libration - It is an effect of the constant speed of rotation of the Moon and the variable speed of its revolution. Hovering in longitude allows you to see the East and West boundary zones of the Hidden Face. Physical Libration - True balance of the axis of rotation of the Moon. It is limited to a few minutes of arc and is due to variations of the terrestrial attraction, also taking into account the heterogeneity of the interior of the Moon. Source: Lunar Observation Guide - Rosely Gregio - REA / Brazil Adaptation and complementation of texts: Avani Soares Mosaic of 65 photos with stacking of 300 frames per photo. Note: This is an image that must be observed in total resolution (4068X5000 pixel) so I urge colleagues to give me the honor of following the link to astrobin: http://www.astrobin.com/full/300057/ 0 /? Nc = astroavani & real = & mod =