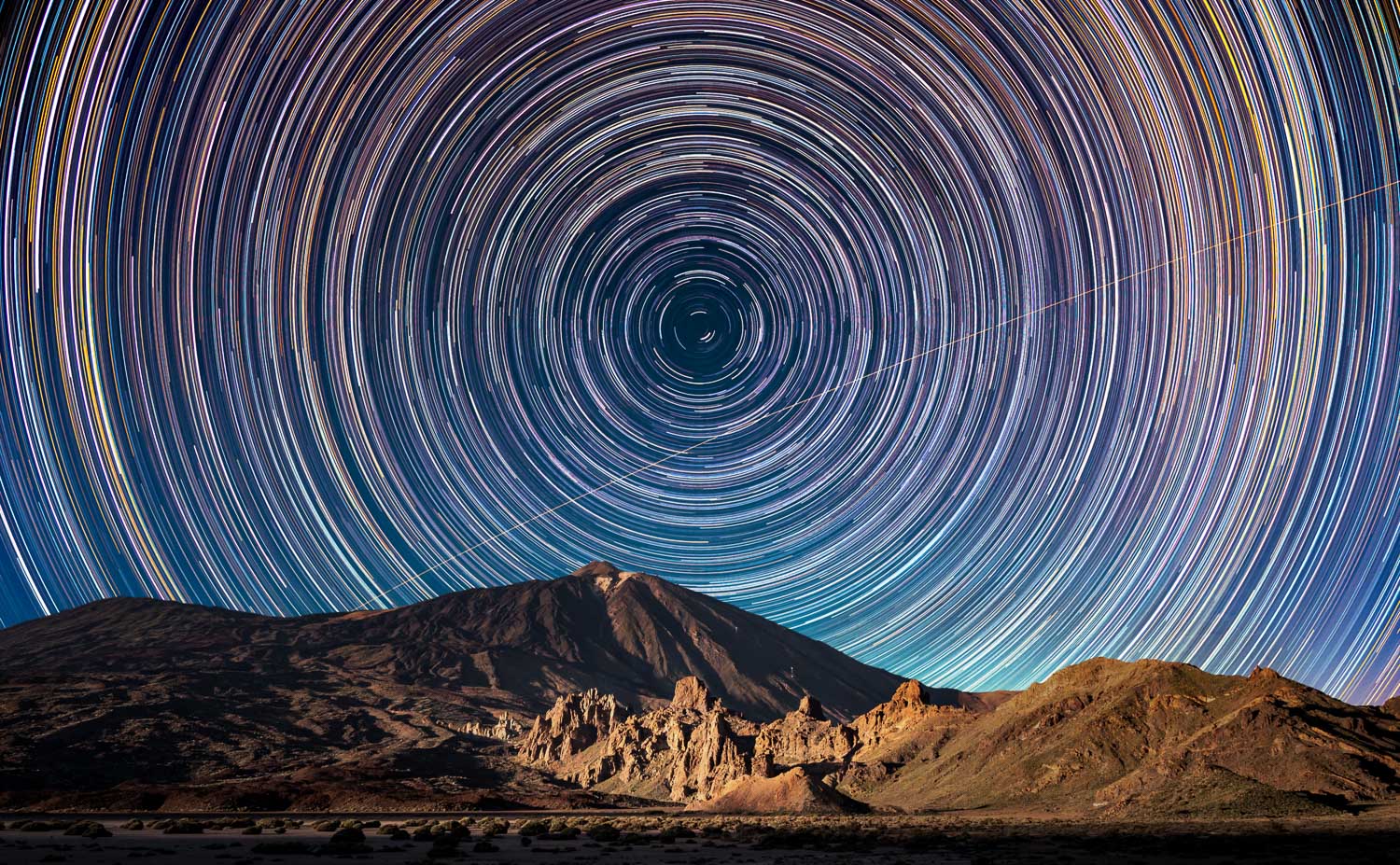 In the Cañadas caldera, at an elevation of about 2,000 meters, I chose a spot that would give me this particular composition: a frame centered on Polaris in the sky, and below, the Teide volcano and the dramatic rock formations of Roques de García. In this particular night, as I had carefully planned it, the International Space Station (ISS) also passed through the chosen field of view. Between 2:01 and 5:48 AM (3 h 46 min), I took a total of 663 consecutive 20-second exposures, which I later stacked using software. Just before twilight, I also took a 7-minute exposure of the foreground to capture all its details with minimal noise. The moon was almost full, shining bright, creating the contrast and dramatic shadows in the landscape. The North Celestial Pole—and Polaris by approximation—is the pivot point directly north of Earth around which the stars circle daily. It takes 23 h 56 min and 4 sec to complete a circle, which is about 4 minutes less than the solar day, and equals the time it takes Earth for a complete rotation (Earth's rotational period = star/sidereal day on Earth). The solar day is slightly offset due to Earth's orbit around the sun (3.9 min * 365 days ≈ 24 h). Since we know Earth's rotational period, we can calculate the angle of the arc, that the stars have completed during the 3 h and 46 min of imaging: The sky shifted by about 56.4° (360° / 23.93 h * 3.75 h). The ISS traversed the field of view at around 5:35 AM and created the bright straight trail going across the image. IMAGE PROCESSING After some initial adjustments in Adobe Lightroom (white balance, saturation, tone curve), I exported the image raw files as JPEGs for stacking. I used StarStaX (v. 0.9) for stacking all 663 frames of the sky, saving all intermediates in addition to the final stacked image. From the intermediates (JPEGs), I later created a time-lapse movie in Photoshop. I saved the final image as TIFF and edited it in Adobe Photoshop, first using the healing tool to remove hot pixels as well as trails from meteors, satellites and airplanes. I then manually corrected for vignetting, adjusted the tone curve and saturation, and applied Gaussian blur and some noise reduction to smoothen the trails. Finally, I opened the image of the foreground as a layer in Photoshop, edited it (white balance, tone curve, gradients, hot pixel removal, etc.) and selected the sky for transparency, blending the two images to create the final picture. TECHNICAL DETAILS Location: Llano de Ucanca, Las Cañadas del Teide, Tenerife (φ 28°12'40.6"N, λ 16°38'06.4"W) Date and time: May 15, 2022 | 2:01 – 5:48 local time Sky frames: 663 frames collected over 3 h 46 min | 20 sec exposure time each | f/4 | ISO 800 | 24 mm Foreground frames: A single frame | 7 min exposure time | f/8 | ISO 800 | 24 mm Camera and lens: Nikon Z6 | Nikon NIKKOR Z 24–70 mm f/4 S