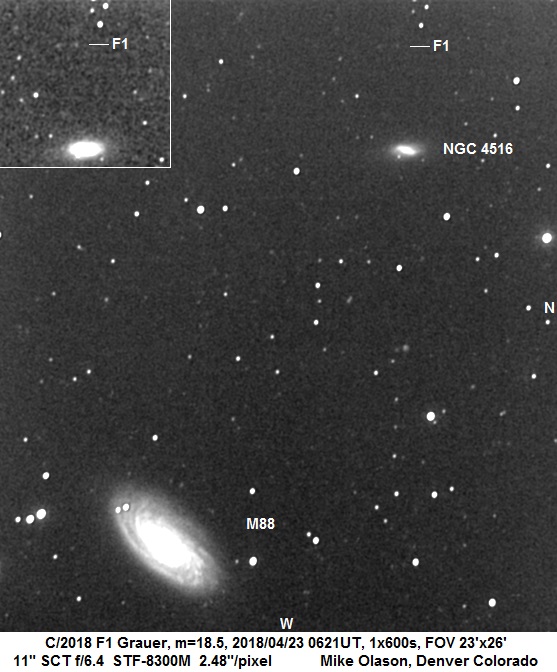 So how do you make magnitude 18.5 Comet C/2018 F1 Grauer look good with magnitude 10 Spiral Galaxy M88 in the background, you don't, not if you want to show a little detail in M88 and still see Comet Grauer. Comet Grauer is 268 million miles from Earth in this image. It will reach perihelion December 14 when it will be 278 million miles from the Sun. It may reach magnitude 18 in early 2019. If one is patient and healthy the comet will be back in 5,667 years unless something perturbs its orbit between now and then. At aphelion the comet will be 59 billion miles from the Sun, Pluto is only 3 billion miles from the Sun. The reason that one can not take a longer image of the comet to make it brighter is because of it's movement. One could average several 600 second images centered on the comet, but then the galaxy would be streaked. The comet is moving at 29 arc seconds/hour (0.008 degrees per hour), thus in a 600 second image (10 minutes) the comet moved about 5 arc seconds (0.0014 degrees) which for my equipment and seeing still showed the comet as a fuzzy dot rather than a fuzzy streak. One has to do tradeoffs to try and image faint comets moving by brighter objects. All comets are moving, brighter comets are moving very fast because they are near the Earth, so if you see an image of a bright comet longer than a few minutes which doesn't show streaked stars, a streaked comet or the comet moving in a GIF, it probably is 2 separate images that have been photo-shopped to perfection then added together, one of a static star field and one of the comet, not exactly real.