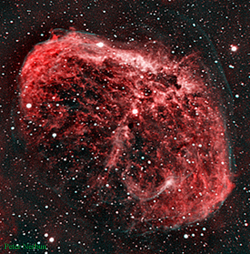 My image shows the Crescent emission Nebula (NGC 6888) featuring a Wolf-Rayet star (WR 136) near its center. WR 136 is 250,000 times brighter than the Sun with a mass 15 times greater. Before the star entered its Wolf-Rayet phase it ejected a shell of hydrogen gas and became a supergiant about 180,000 years ago; that shell continues to expand at 80 km/sec. A much faster stellar wind, generated after the star entered its Wolf-Rayet phase, travels at 1,700 km/sec and results from the intense heat generated by an exposed helium layer along a boundary between the surface of the star and outer space. (Current theory suggests that WR 136 has a small companion star that stripped away all of WR 136's hydrogen). The faster stellar wind shapes the shell by shredding the nebula into separated short filaments. The fast stellar wind also ionizes the hydrogen atoms thereby separating each atom's electron from its proton; the separated hydrogen electrons recombine with the hydrogen protons thereby emitting photons at a wavelength of 6563 Angstroms (viz. the Hydrogen alpha wavelength) which corresponds to a shade of red. That's why the nebula is predominantly red in color. The outer boundary of the nebula's shell is shaped by a collision between the slower moving shell and the very fast moving Wolf-Rayet stellar wind thereby producing a shockwave along the boundary of the nebula. I captured this image this image on Oct 24, Oct 25, Oct 26 and Oct 29 2016 over a total integration time of 8 hours and 15 minutes through 3nm Hydrogen Alpha and Oxygen-III narrowband filters on my 11 inch aperture Schmidt Cassegrain telescope. I recorded fifteen 15 minute and one 30 minute camera exposures in the H-alpha channel and sixteen 15 minute camera exposures in the O-III channel to form this image.