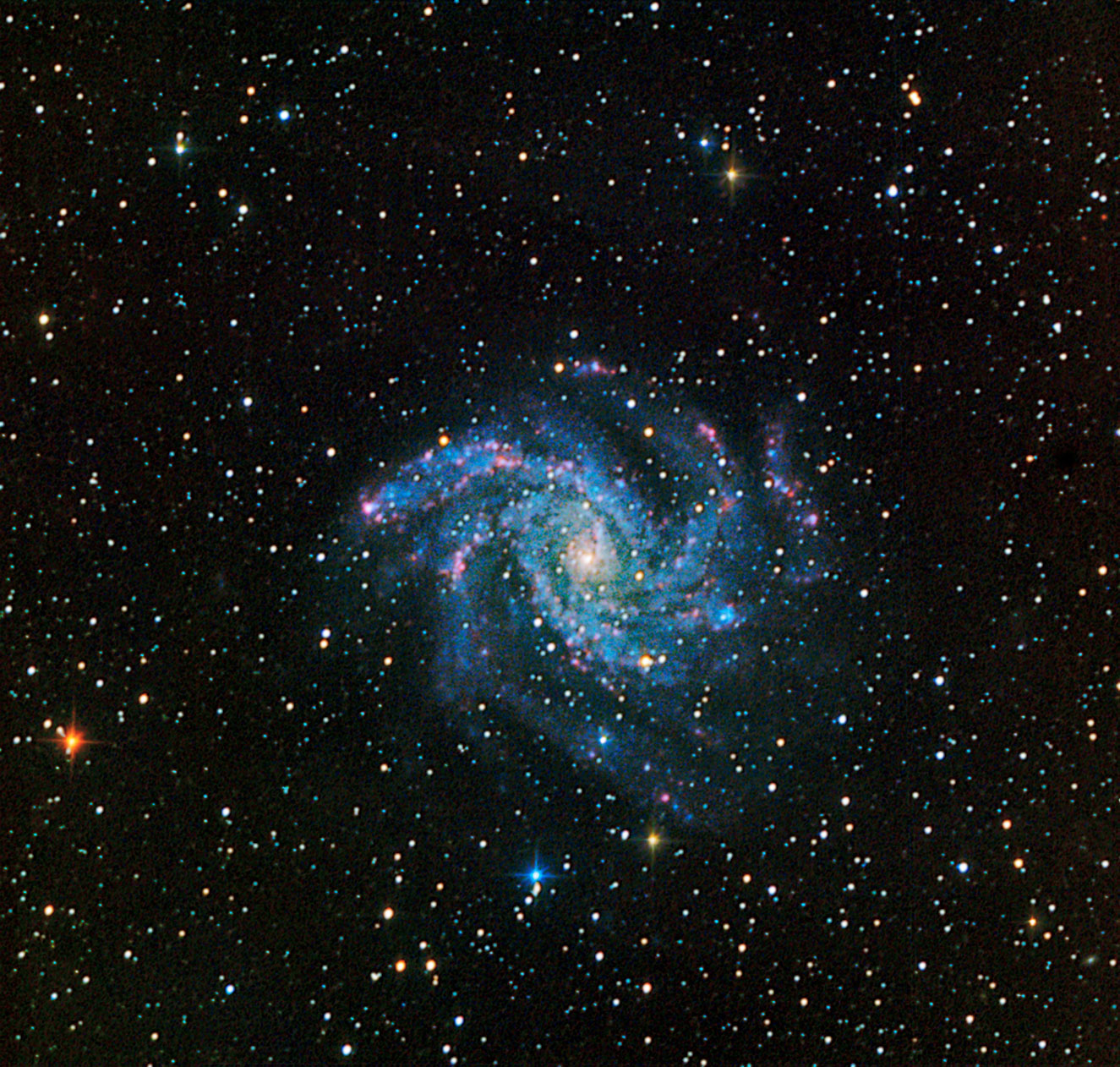 The raw imagery was collected using a Planewave Model CDK24 (Corrected Dall-Kirkham) telescope with an 0.61 meter (24 inch) aperture at f/6.5, using an Apogee Aspen CG16M CCD camera and 2x2 binning and Astrodon filters. All data are acquired by this robotic observatory as unguided 1-min sub-exposures, which were integrated during processing to cumulative exposures of H-alpha (83-mins), Luminance (121-mins), Red (64-mins), Green (78-mins), and Blue (65-mins).

The Fireworks Galaxy in Cepheus graces the northern hemisphere’s evening sky during summer and fall near that constellation’s border with Cygnus. Appearing now high in the northwest after sunset, the light used to prepare the attached image left this mid-sized spiral galaxy more than 22 million years ago. NGC 6946 has gained notoriety by hosting 10 supernovae over the past 100 years, which is more than found in any other (relatively) nearby system. The most recent of these, SN 2017eaw, was discovered in mid-May of this year at a location 61 arcsec west and 143 arcsec north of the galaxy’s center. It is the yellowish star about twice the distance to the nearest spiral arm at the 1 o’clock position in this image. Mean images were prepared for all 5 channels using CCDStack, and a sixth image was prepared by deconvolving the Luminance frame to sharpen its detail by about 1-pixel. The mean H-alpha image was then blended separately in Photoshop with the sharpened mean Luminance and Red images to enhance their detail. After increasing the contrast in these blends using high-pass filtering, the H-alpha-augmented Red frame was blended with the Green and Blue masters to produce a preliminary color image. Since the use of H-alpha augmentation can alter the original color balance among the Red, Green and Blue channels, the pixel histograms for each channel were monitored carefully during processing and manipulated as needed. The preliminary color image was then blended in Photoshop with the sharpened H-alpha-augmented Luminance master, and that L(H-alpha)R(H-alpha)GB result was enhanced further using a light unsharp mask. Following application of that mask, noise reduction, star-shaping to improve the roundness of the stars, and star core-halo profile smoothing were applied..