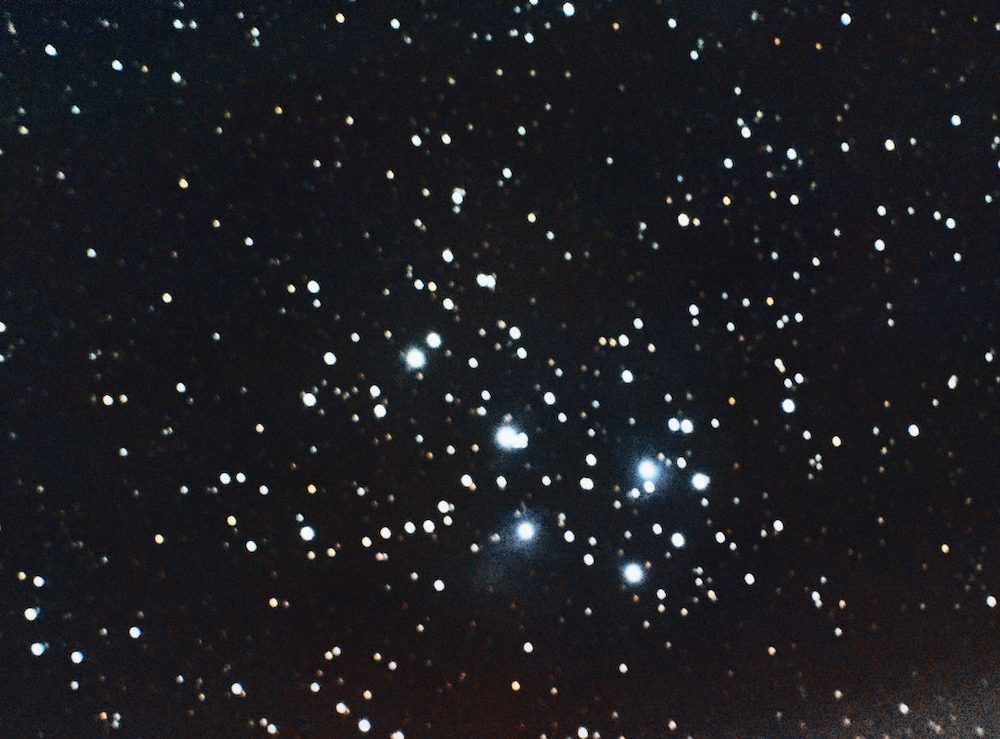 The Pleiades are a group of more than 800 stars located about 410 light-years from Earth in the constellation Taurus. It's a "winter" group but is still visible in the early night Northwest sky, just below the planet Venus. Most skywatchers are familiar with the assembly, which looks something like a smaller, hazier version of the Big Dipper in the night sky. Also known as the "Seven Sisters" and Messier 45, the object derives its English name from Greek legend. The Pleiades are the seven daughters of the Titan god Atlas and the ocean nymph Pleione. During an ancient war, Atlas rebelled against Zeus, the king of the gods, who sentenced his foe to forever hold up the heavens on his shoulders. The sisters were so sad that Zeus allowed them a place in the sky in order to be close to their father. The brightest stars in the formation glow a hot blue and formed within the last 100 million years. They are extremely luminous and will burn out quickly, with life spans of only a few hundred million years, much shorter than the billions of years our sun will enjoy. Many different cultures have names for the Pleiades that often include the number seven, such as the "Seven Sisters," "Seven Maidens" or "Seven Little Girls." This might seem odd to modern observers, who can typically discern only six stars in the cluster. But that's simply a consequence of a light-filled night sky. With sharp eyes and a clear, dark sky, it's possible to spot up to 12 stars in the Pleiades group. This image is a stack of 31 thirty second exposures through a 300 mm F4 telephoto lens at ISO 1600 (Canon EOS 760D).