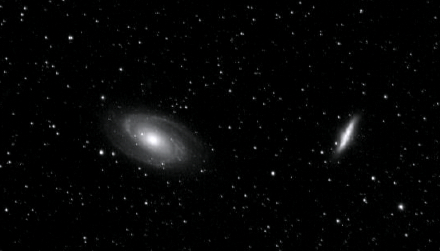 M81 (on the left), a "face-on" spiral galaxy, and M82 (on the right), seen "edge-on," are a pair of galaxies in the constellation Ursa Major, near the "Big Dipper." The apparent separation of the galaxies is 31 arc-minutes but at a distance of 12 million light-years, their actual distances from each other is 150,000 light years. M81 was discovered in 1774 by J.E. Bode, and is known as "Bode's Galaxy." It has a diameter of 92,000 light years and an estimated mass of 50 billion solar masses. M82, also, discovered in 1774, is known as the Cigar Galaxy. It has an irregular, distorted disk due to the gravitaional interaction of its larger neighbor M81. It is known as a starburst galaxy since it is the site of intense star-forming activity. Its diameter is 37,000 light years, and its estimated mass is also 50 billion solar masses.