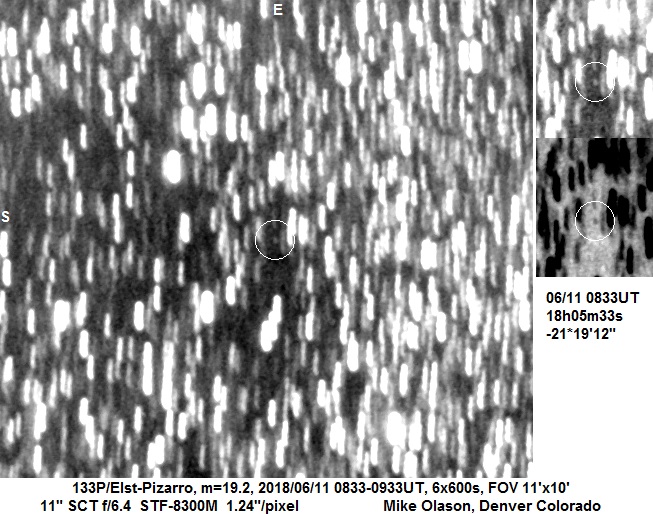 Comet 133P/(7986) Elst–Pizarro is a body that displays characteristics of both an asteroid and a comet. Main-belt comets are bodies orbiting within the asteroid belt that have shown comet-like activity during part of their orbit. The asteroid belt is the circumstellar disc in the Solar System located roughly between the orbits of the planets Mars and Jupiter. The asteroid belt is a remnant of the planetesimals that formed the planets in the inner solar system, they are asteroids caught in their current orbit because of a gravitational resonance between Mars and Jupiter. When referred to as an asteroid it is (7968) Elst-Pizarro, when referred to as a comet it is 133P/Elst-Pizarro. At perihelion in its 5.63 year orbit on March 28 it was 247 million miles from the Sun, at aphelion in its orbit it will be 340 million miles from the Sun. In this image which is looking near the center of our Milky Way Galaxy, 133P is in the foreground of a lot of brighter stars which show as streaks as the 6 ten minute images are stacked on the comet which is moving 0.0077 degrees per hour across Earths night sky. Comet 133P is magnitude 19.2 but is hard to show in the image due to all the bright stars in the background. 133P has reached peak magnitude 19 for this orbit and is 157 million miles from Earth in this image.