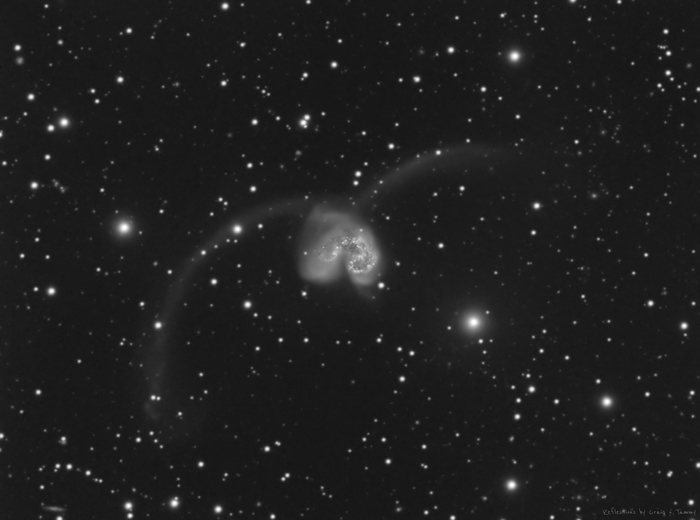 Discovered in 1785 by William Herschel, NGC 4038 & NGC 4039 are a pair of interacting galaxies located 45 million light-years away (once thought to be 65 million), respectively, in the constellation Corvus and are known as “The Antennae Galaxies” because of the two long tails of stars, gas and dust being ejected as a result of their collision. These were two separate galaxies about 1.2 billion years ago. Before they collided, NGC 4038 was a barred spiral galaxy and NGC 4039 was a spiral galaxy, and the larger of the two. These galaxies began to approach each other about 900 million years ago and passed through each other 300 million years later. Stars began to be released from both galaxies 300 million years ago. Observations and simulations suggest that as the nuclei of these galaxies collide and become a single core, with stars, gas and dust around it, they will eventually become an elliptical galaxy. The apparent magnitude of these galaxies are 11.2 for NGC 4038 (left in the above image) and 11.1 for NGC 4039 (right in the above image). Other designations: Ringtail Galaxy; PGC 37967 & PGC 37969; Arp 244; Caldwell 60 & Caldwell 61