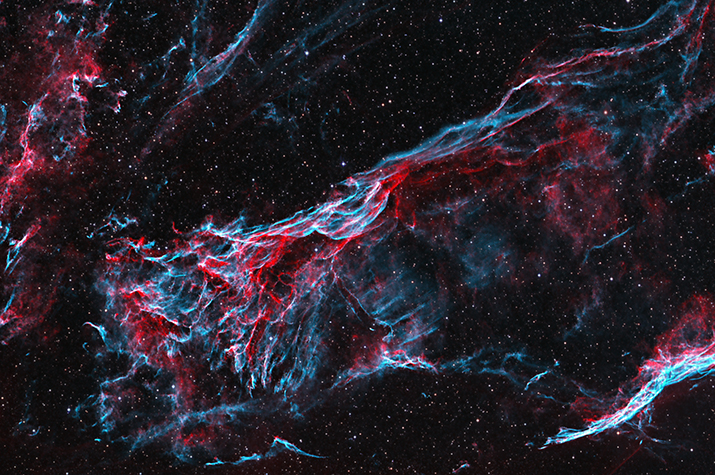 Pickering's Triangle is part of the Veil Nebula complex visible in the constellation Cygnus. The nebula is the remnant of a supernova explosion that occurred roughly 10,000 years ago. Pickering's Triangle was discovered in 1904 on a photographic glass plate by the Scottish born Williamina Fleming while working at the Harvard College Observatory under the direction of Edward Charles Pickering. Fleming was part of a team of skilled and underpaid women known as the Harvard Computers hired to analyze and process data collected by the observatory. Fleming had initially been hired to serve as Pickering's housemaid. Pickering reportedly fired a male assistant at the observatory while exclaiming that his maid could do a better job, although he clearly recognized her intellectual talents and abilities. Fleming became a strong advocate for the advancement of women in the field of astronomy. Accomplishments in her highly successful career included: the discovery of numerous variable stars, novae, and nebulae including the famed Horsehead Nebula in Orion; the development and assessment of a system to classify stars through distinctive features of their spectra; and the publication of scientific articles and reports. In 1906, she was the first American (and Scottish) woman elected to the Royal Astronomical Society of London. An additional honor is the recognition of her discovery of Pickering's Triangle under the appellation of Fleming's Triangular Wisp.