Portrait of the Cygni Nebula region. A five-panel mosaic in narrowband 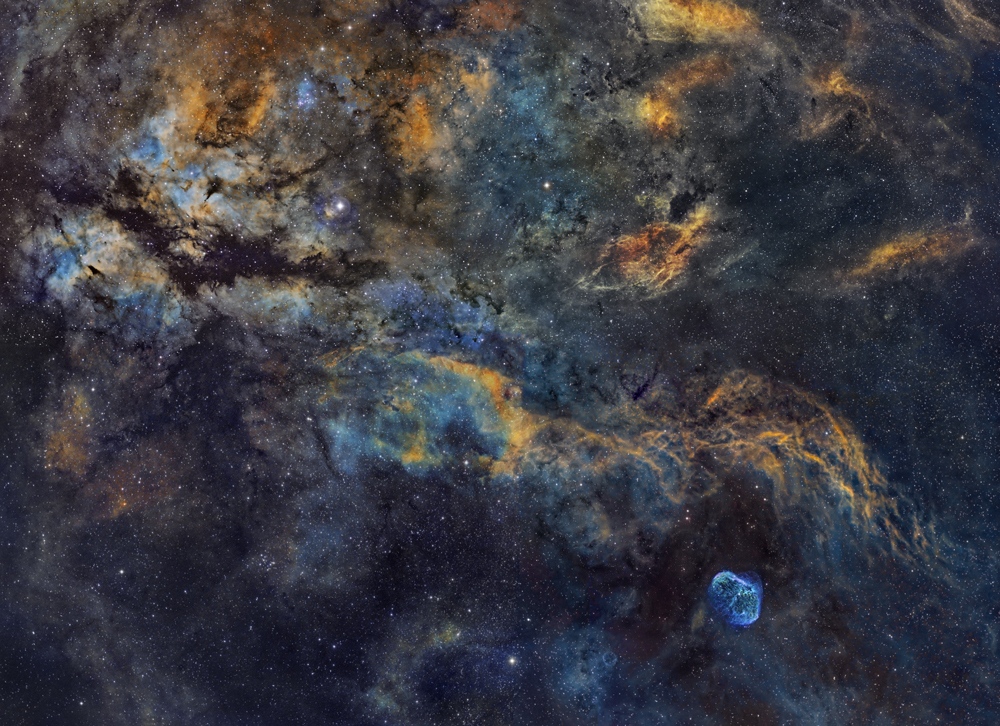 Total Integration: 93.0 hours Resolution: 6023x4374 This is a combination - mosaic of wide field Narroband data, with added close-up data of the Crescent nebula area acquired with my RC8 . This is the fifth panel addition and final of my Gamma Cyg nebula project. The Sadr region, or IC 1318, is the diffuse emission nebula surrounding Sadr or Gamma Cygni. Sadr lies in the center of Cygnus's cross. The Sadr region is one of the surrounding nebulous regions; others include the Butterfly Nebula and the Crescent Nebula. It contains many dark nebulae in addition to the emission diffuse nebulae. Sadr itself has approximately a magnitude of 2.2. The nebulous regions around the region are also fairly bright. The Crescent Nebula (also known as NGC 6888, Caldwell 27, Sharpless 105) is an emission nebula in the constellation Cygnus, about 5000 light-years away. It was discovered by Friedrich Wilhelm Herschel in 1792.[2] It is formed by the fast stellar wind from the Wolf-Rayet star WR 136 (HD 192163) colliding with and energizing the slower moving wind ejected by the star when it became a red giant around 250,000[3] to 400,000[citation needed] years ago. The result of the collision is a shell and two shock waves, one moving outward and one moving inward. The inward moving shock wave heats the stellar wind to X-ray-emitting temperatures. It is a rather faint object located about 2 degrees SW of Sadr. For most telescopes it requires a UHC or OIII filter to see. Under favorable circumstances a telescope as small as 8cm (with filter) can see its nebulosity. Larger telescopes (20cm or more) reveal the crescent or a Euro sign shape which makes some to call it the "Euro sign nebula".