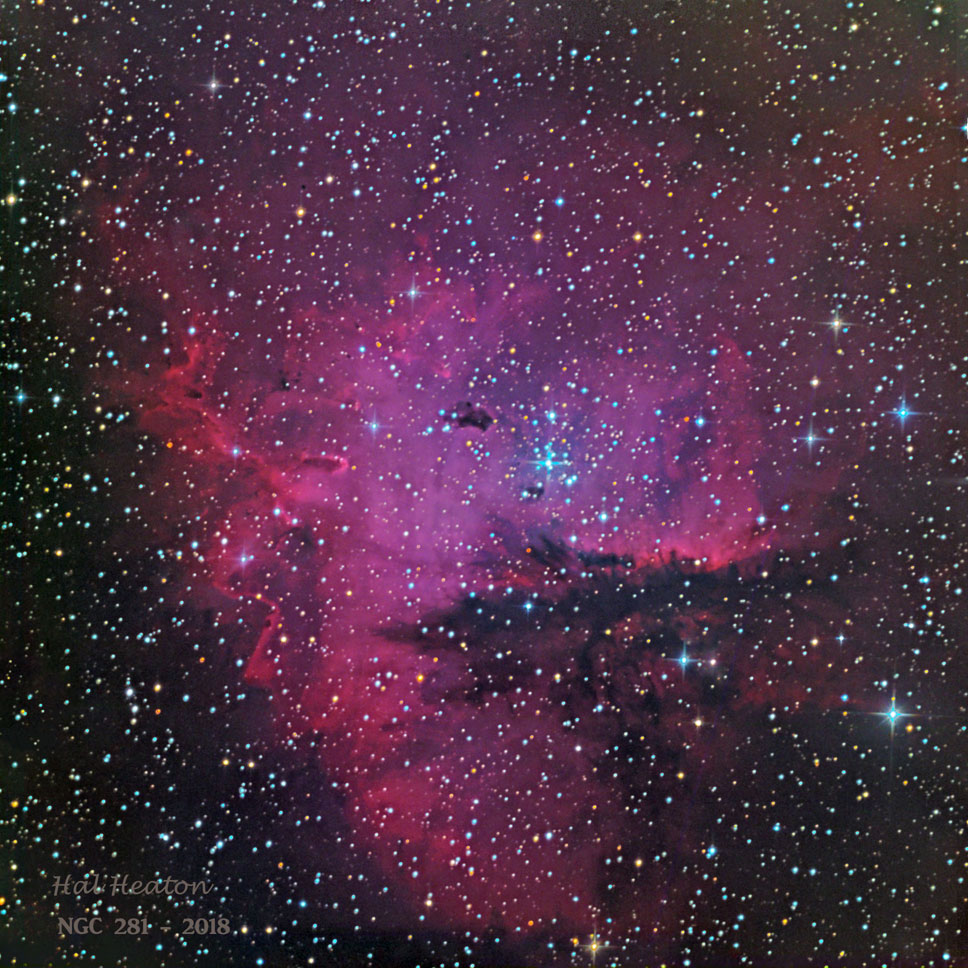 NGC 281 is an emission nebula about 1.8o east of alpha Cassiopeiae, which is situated slightly below the plane of the Milky Way in the Perseus Arm of the Galaxy. It is powered by the trapezium-like multiple O-star system HD 5005 in the embedded star cluster IC 1590. The fierce winds and strong radiation from this cluster, which lies just to the right of center in the image, interact with the large dust cloud just “below” it, and the wedge that cloud cuts out of the nebula gives rise to the scene’s popular designation as the Pacman Nebula. The nebulosity is surrounded by a cloud of neutral hydrogen nearly twice its size, and the entire complex is thought to lie on the surface of an expanding superbubble caused by an ancient supernova. At a distance of 9627.2 lys (GAIA DR2), the 30.2 arcmin square field-of-view spans approximately 84.4 lys on each side. The sub-exposures were integrated using CCDStack to produce mean background-flattened images of 1.92, 1.32, 1.05, 1.27, 1.45 and 1.13-hrs duration in the L, R, G, B, H-alpha and OIII bands, respectively. (North is up and east is to the left.) The H-alpha and OIII images were blended in Photoshop with a contrast-enhanced, high-pass filtered version of the Luminance image. The H-alpha image was also blended into the Red frame, as was OIII with both the Green and Blue channels. A new RGB image made from those blends colored the composite Luminance, its color channels were rebalanced, and the radial profiles of the stars adjusted to reduce distortions from the lack of guiding. After reducing background noise, prominent structures were emphasized using Soft Light blending and an unsharp mask, and the largest stars were puckered.