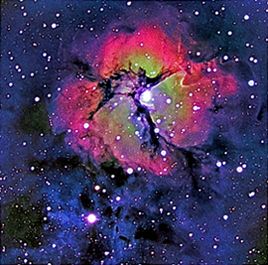 My image shows the Trifid Nebula (Messier 20) which I captured with a C-11 SCT over a total integration time of 807 minutes. In this image I enhanced the Red channel data with Hydrogen-Alpha channel data. Then I combined this enhanced Red channel data with O-III and Blue channel data and further combined the resulting color image with a Luminance image using the LRGB Combination process in Pixinsight. That yielded the final L_HA-R_OIII-B luminance enhanced color image. Please note the downwardly extending red finger like element in the upper right section of my image; this finger of hydrogen gas and dust has two thin structures extending from its left side; one of the structures is known as an "evaporating gas globule" (EGG) while the other is a magnetically collimated jet. Both structures can be seen in my image by focusing attention on the illuminated tip of the finger. They are better seen at the higher resolution image on my website as presented below this description paragraph. The jet is ejected by a rotating helical magnetic field of a newly forming star (called a "protostar") that is hidden by the dark dust of the red finger. Surrounding the protostar is a protoplanetary disk of newly forming Solar System measuring about 200 AU in diameter; the jet is ejected perpendicular to the plane of this disk and measures over 48,000 AU in length.