Venus and the Pleiades | Fred Espenak 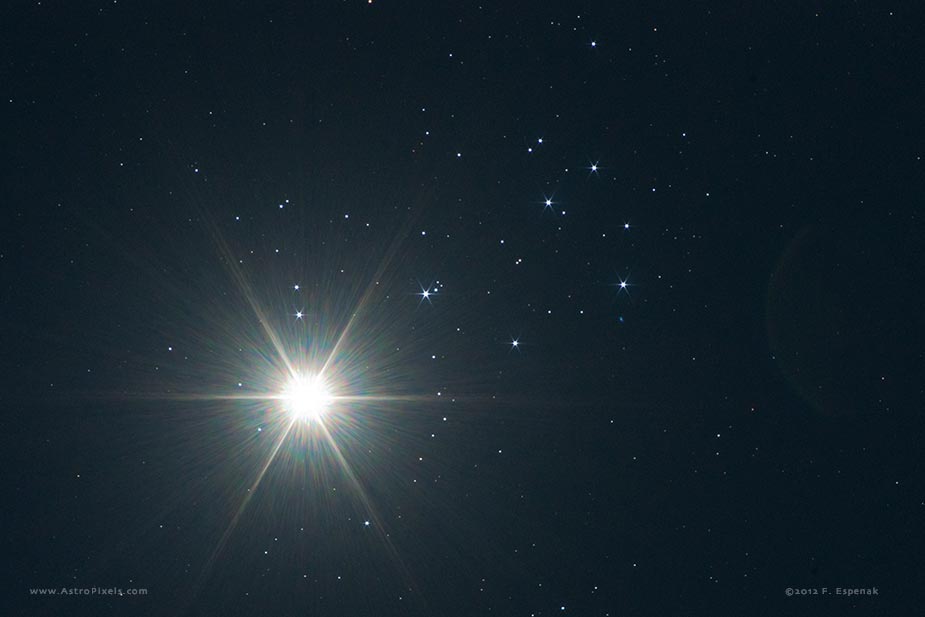 A Nikon D90 and a Sigma APO 400mm lens were used to capture the event (North is up). The exposure was 4 minutes at f/22 (ISO 800). Camera tracking was accomplished with a Losmandy G-11 equatorial mount.

Conjunctions between Venus and the Pleiades star cluster at favorable elongations from the Sun are relatively rare astronomical events. The last one occurred in May 2004 (source: More Mathematical Astronomical Morsels, 2002, Jean Meeus). The Pleiades is one of the most famous night sky asterisms and is also known as the Seven Sisters, Subaru and M45 (http://astropixels.com/openclusters/M45-01.html). In April 2012, Venus and the naked-eye star cluster are again in close proximity for several days, and with Venus favorably placed in the evening sky just days after its Greatest Eastern Elongation from the Sun on March 26. The image below shows the close conjunction of Venus and the Pleiades on the evening of 2012 April 3 (local time), as seen from Portal, AZ. It will take approximately 3 days for Venus to pass through the Pleiades (April 2-4). Check AstroPixels.com (http://astropixels.com/main/recent.html) for more photos of this lovely event in the coming days.