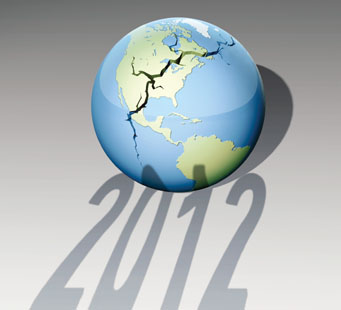 On December 21, 2012, Earth's magnetic poles will not flip, California will not break apart and slide into the sea, and a secret monster planet will not smash into Earth out of the invisible nowhere.

But every week, more and more people are coming to believe such things will happen — thanks to a spectacular blend of bad astronomy, bad Maya ethnography, several popular books, and spreading internet hysteria. Confusingly, it all sounds like it's based on science.

And it will arrive in theaters soon — when the disaster movie 2012 premieres everywhere on Friday, November 13th. The movie's slogan is: "Find out the truth." Anyone who reports on science, pop culture, or internet manias had better know the truth by then.

"The world will not come to an end on December 21, 2012," says prominent astronomer and astro-historian E. C. Krupp, director of Griffith Observatory in Los Angeles and a Sky & Telescope contributing editor. "The 2012 doomsday idea starts with a misinterpretation of the Maya calendar."

Krupp debunks the 2012 doomsday idea in the cover story of the November 2009 issue of Sky & Telescope magazine, which is now on sale at newsstands. The article explains what you need to know for your 2012 defense kit.

E. C. Krupp, Ph.D., an accomplished astronomer, author, and science educator, is an internationally renowned expert on ancient astronomy, including the Maya, and has visited nearly 1,900 ancient and prehistoric sites throughout the world.

If you believe what you hear, writes Krupp, "The ancient Maya of Mexico and Guatemala kept a calendar that is about to roll up the red carpet of time, swing the solar system into transcendental alignment with the heart of the Milky Way, and turn Earth into a bowling pin for a rogue planet heading down our alley for a strike."

Krupp explains the realities, the many falsehoods, and the mixed exaggerations of astronomy and the Maya calendar system that supposedly combine to predict catastrophe. Krupp also reviews other recent end-of-the-world astro-manias: the "Jupiter Effect" doomsday of 1982, the "Harmonic Convergence" overthrow of the old world order in 1987, and the "5-5-2000" planet-alignment catastrophe predicted for 2000. Interestingly, some of the same people and their notions were behind these erroneous predictions too.

"As we approach 2012, more and more professional and amateur astronomers are being asked about the doomsday scenario, so we want to help educate them, so they can inform the general public," says Robert Naeye, Editor in Chief of Sky & Telescope. "Dr. Krupp's article thoroughly demolishes this pseudoscience drivel, and serves as an outstanding resource for scientists, educators, and the media."