A New Day in Precision Cosmology 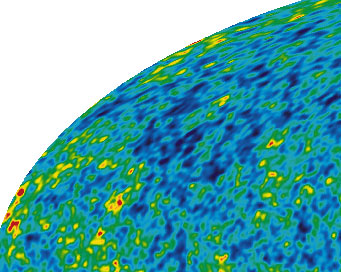 Tiny temperature irregularities in the cosmic microwave background are plotted on this map of the whole sky. This is the new the 5-year WMAP data. The average temperature is 2.725 kelvins (degrees above absolute zero; equivalent to –270° C or –455° F). The colors represent very slight deviations from this temperature, as in a weather map. Red regions are warmer and blue regions are colder by only about 0.0002 degree. Click image for larger view.

Ask what's the greatest scientific triumph of our lifetime, and somewhere near the top of the list would be the establishment of "precision cosmology." In just the last decade or so, astronomers working in a remarkable specialty have determined — with high accuracy — such things as the date of the Big Bang, the amount and makeup of all the matter and energy in the universe, the large-scale shape of space, and how cosmic structure (galaxy clusters, galaxies, stars) grew and evolved from the very beginning to now, and why.

Along the way, researchers have confirmed some key predictions of the "inflationary universe" theory of how the Big Bang itself erupted from a much larger, underlying pre-existence, which could be producing inconceivable numbers of other, separate big-bang universes all the time.

This has become possible not by conventional astronomy, but by analyzing the cosmic microwave background radiation that covers the entire sky. This weak radio glow is literally the white light emitted by the still-white-hot universe as it stood just 380,000 years after the Big Bang. The light has been redshifted down into the microwave part of the spectrum (by a factor of 1,091) by the expansion of space since that time.

This "power spectrum" shows how strong the temperature irregularities in the microwave background are (vertical axis) depending on their angular sizes on the sky (horizontal axis). Very large structures are on the left, and smaller angles are on the right. The strongest variations appear about 1° wide on the sky, the large first peak in the graph. This means that there was a preferred length for the cosmic-sized acoustic waves (pressure waves) in the dense early universe. The exact positions and sizes of the first, second, and third acoustic peaks tell about various conditions prevailing in the early universe.

Dozens of experiments have mapped tiny, telltale irregularities in the microwave background; these projects have worked at various scales and have pointed at different parts of the sky. But the most important instrument now doing this work is the orbiting Wilkinson Microwave Anisotropy Probe (WMAP). It is mapping the background radiation's temperature and polarization across the entire celestial sphere, and at a wide variety of angular scales: from large (many degrees wide, constellation-size) to nearly as small as the resolution of the human eye.

As time goes on, WMAP has continued to sharpen its picture.

Its first-year data release, in 2003, set milestones in precision cosmology -- among other things, pinning the age of the universe to 13.7 billion years with an uncertainty of just a couple percent, and confirming the existence of the recently discovered "dark energy" that is making the expansion of the universe speed up.

The three-year data release, in 2006, confirmed that the first results were on target, refined the numbers, and put new constraints on how cosmic inflation could have worked during the first 10–32 second or so of the Big Bang. The story of how such things can be found from mere maps of the microwave background (such as the new one pictured at top) is told in the May issue of Sky & Telescope, now at the printer.

Just after we sent that issue to press, WMAP's science team released the much-awaited five-year data set, along with their conclusions about what it tells. Once again, the additional data (and better long-term calibration of the instruments) refines the picture significantly — and, as a result, yields new conclusions.

The following results combine the new WMAP data with other recent astronomical clues: