Beyond the Printed Page: A Modern Standing-Stone Calendar 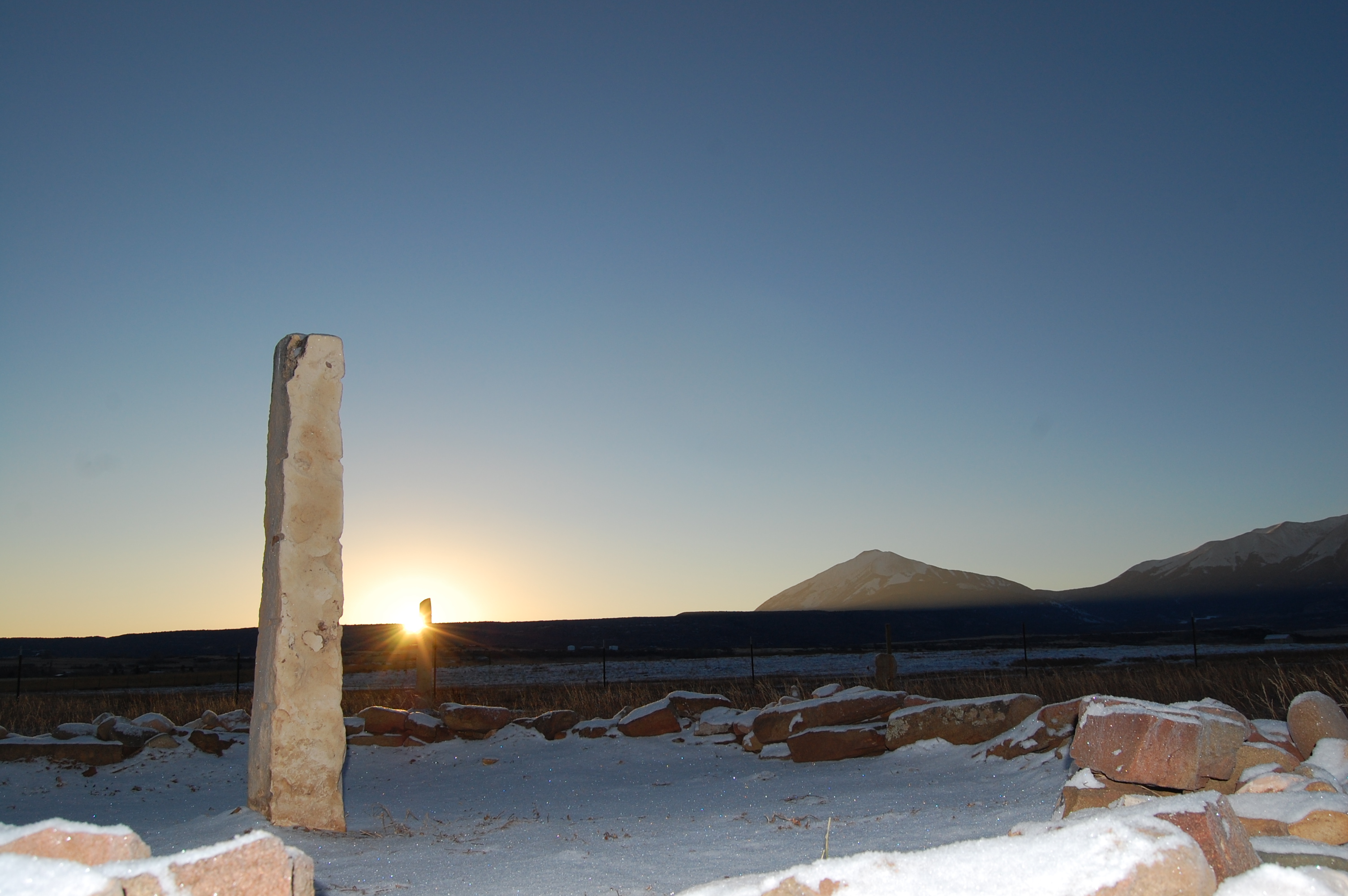 When I first visited the site in southern Colorado where I hoped to build a standing-stone calendar — see article in the April 2017 issue of Sky & Telescope — I had an epiphany of sorts. As the first rays of sunlight illuminated the site and my shadow stretched out across the field, I knew in an instant I had come to the right place. In time, standing stones would rise from the earth here, and visitors would have the opportunity, in some small way, to touch the distant past. On that morning I planted a marker where I, together with fellow members of the Southern Colorado Astronomical Society, would later erect the first standing stone.

All was not perfect that morning, though. The temperature was 8°F, with wind gusting to 25 mph, and it was only after I’d arrived before sunrise that I realized I’d made one crucial error in dressing for the punishing subarctic conditions. I’d neglected to take the proper gloves to operate my camera, with which I hoped to properly document the site. While my heavily insulated mittens would protect my hands, I would need to remove at least one of them to take photographs. The snow that had fallen earlier in the month had melted and refrozen, forming tiny solid ice crystals now resembling small shards of broken glass — which the fickle wind threw into my face.

As the sun breached the eastern horizon I braced myself against the gusts and slipped my right hand free. In less than a minute my fingers burned as if I’d been stung by wasps, though my suffering was short-lived as the pain was swiftly replaced by a dead numbness. In my raw eagerness to move forward with the project I was running the risk of serious frostbite. Images of mountain climbers with black, rotting fingers came to mind as I struggled to get my mitten back on. I’d succeeded in capturing the moment the Sun broke the horizon and had marked its location on the future calendar with a grapefruit-sized rock. But what price would I pay for my stupidity?

As I battled back to the refuge of my waiting SUV, I was caught off balance by a sudden cyclonic blast on the icy terrain and unceremoniously thrown to the ground like a bag of potatoes tossed on the bed of a flatbed truck. Had anyone been crazy enough to be out there too, I would have presented an amusing sight rolling around like an overstuffed slug in my bulky garb. Fortunately I still found humor in the situation, and as I reached the vehicle I had to chuckle. I could see the headlines now: “Local researcher found frozen 50 feet from running vehicle. Coroner rules death accidental due to abnormally high amount of poor planning.”

Back home, as my enthusiasm for the impending project grew, my mind raced ahead to computer-generated models with animations of the Sun sweeping across the sky on the winter solstice. I rushed to my iPad and downloaded an app to turn my device into a surveyor’s transit linked to the GPS network of satellites. We would place the stones with laser precision! As a retired engineer, I guess I couldn't help myself. I was lost in the mist of technology, enchanted by the siren call of handheld devices, and mesmerized by a seemingly endless number of easy-to-use applications.

Fortunately, I came to my senses before it was too late, realizing that one of my goals in building the stone calendar was to stick to the old ways as much as possible. I decided there would be no blueprints to work from, no computers or other silicon-based entities of any type used on the project. As the architect, I would see to that. I won’t mislead you, though, into believing that I carried all the stones to the site on my back or braided my hair into a rope to measure distances!

Thankfully, we received a generous donation of all the large standing stones required to build the calendar. The monuments had started their lives of service as Kansas fence posts, carved from limestone formations by skilled masons a century or more ago. The gentlemen who made the donation collected the rocks near Dodge City, Kansas, loaded them onto trailers, and transported them to the site. The remaining stones were donated locally and trucked in by club members.

We erected the center standing stone first, then a surrounding circle of smaller river rocks. This forms the observation gallery, where visitors can witness solstices and equinoxes. Beyond the inner stone circle, along the alignments of the rising and setting sun on the solstices and equinoxes, stand six enormous stones. Two other stones in that perimeter circle mark true north and true south, and four additional stones complete the perimeter (see diagram above). Enclosed within the circle itself is a star chart carved in stone depicting the location of the North Star, Polaris.

While we think of astronomy as a relatively modern endeavor extending back to the days of Galileo in the 15th century, it’s actually much older. In fact, it may be human beings’ oldest attempt to understand the world around them. Astronomy can also help with the future. It’s just possible, for instance, that out there right now are brilliant young minds just waiting to have their imaginations set ablaze by watching the sun rise over a standing stone circle on the summer solstice. It’s our obligation as amateur astronomers to help them along the way.

What a great idea! I visited Stonehenge last summer with my son and father we all loved it. It's great to know that there will be something like that here in the USA. If I'm ever in CO I'll visit!

I love the "Standing-Stone Calendar" project!
I was surprised, a few years ago, to discover that USA has its own ancient "Stonehenge" (actually a "woodhenge", since it's made of wooden poles instead of stone monoliths) at the "Cahokia Mounds" not too far from St. Louis. The original arrangement was apparently made about a thousand years ago.
Cheers,
Bob B.

A great project! Here is a similar stone circle a friend and I built seventeen years ago called, Keppel Henge: http://www.steveirvine.com/henge.html