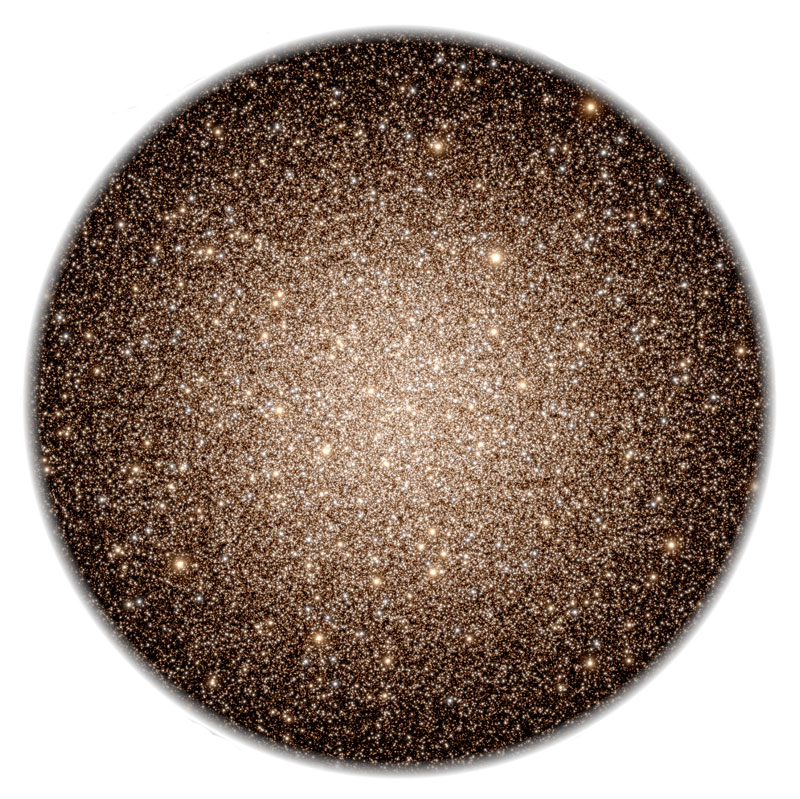 This globular cluster is a fake: it's a supercomputer simulation, not a real cluster orbiting the Milky Way. The Dragon Simulation team successfully followed four million-star clusters through 12 billion years. This is one of the clusters.

We dove into globular clusters, the big balls of old stars that surround the Milky Way and other large galaxies, in the August 2016 issue of Sky & Telescope. These stellar families formed when the galaxy was first coming together, roughly 12 billion years ago. They form with a few hundred thousand to a million stars.

To understand how these clusters change with time, astronomers use high-powered computer simulations to create virtual clusters and watch them age. But for years, simulating the evolution of a million stars was a pipe dream. That’s because it takes an incredible amount of computational wherewithal to calculate the gravitational pull each star has on every other and then follow how those pulls change over time.

But in December 2015, the Dragon Simulation team won a bottle of quality Scotch whisky for successfully solving “the million-body problem.” The team of nine researchers successfully ran four cluster simulations that looked impressively like the real thing. The story of their efforts appears in the August 2016 issue of Sky & Telescope.

The team created mock observations of their computer models, so that they could compare the simulated clusters with real ones. As an online extra for the August 2016 article, below you’ll find a series of those snapshots, for two of the team’s four simulations.

Each simulation begins with 1,050,000 stars (central circle in the hexagon) and follows these stars’ evolution over 12 billion years. Step by step, the simulation calculates each star’s gravitational effect on the others, even as it also tracks the stars’ aging and deaths. The six circles surrounding the central circle show different populations of objects within the cluster. From top right,

Over time, these populations appear and grow. The black holes settle to the center as the cluster ages. (Note the change from Myr, or million years, to Gyr, or billion years, as the slideshow progresses.) 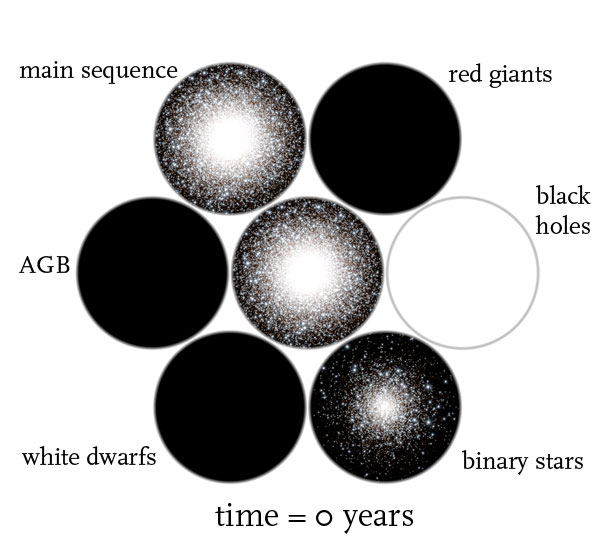 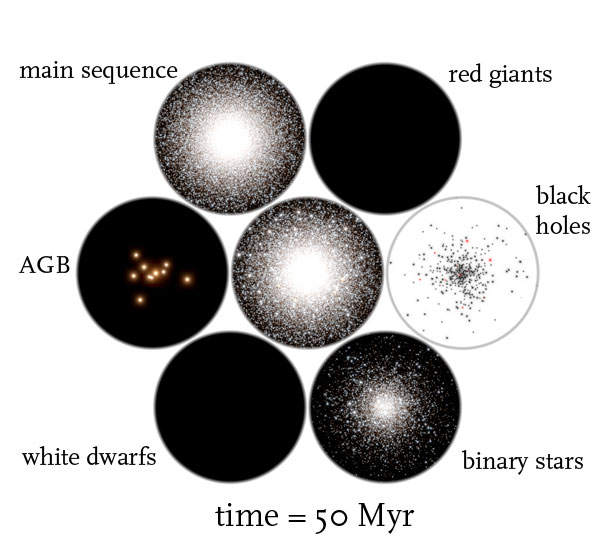 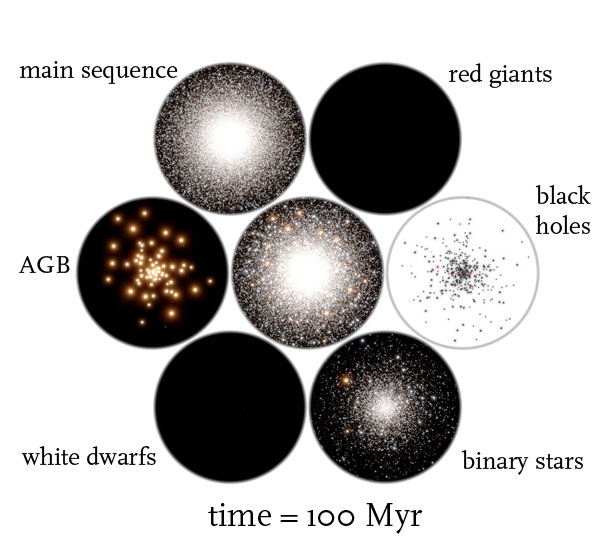 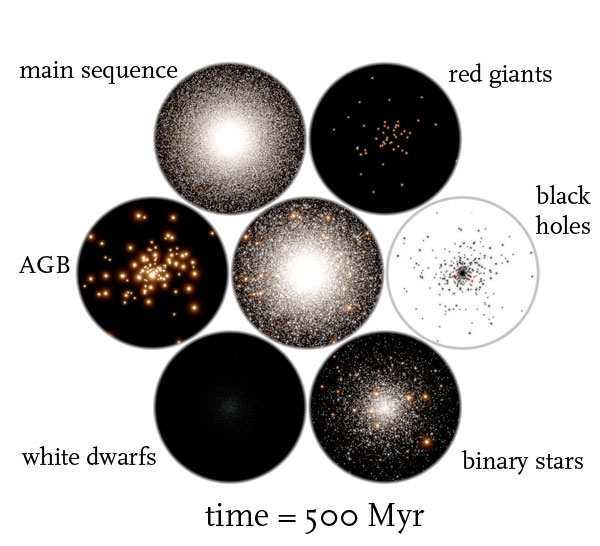 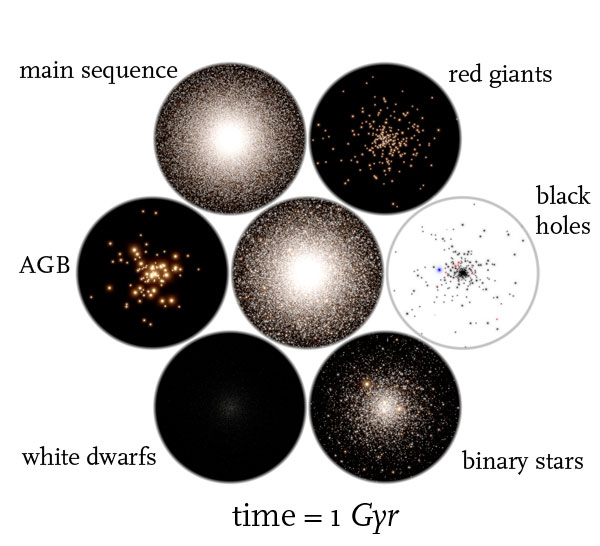 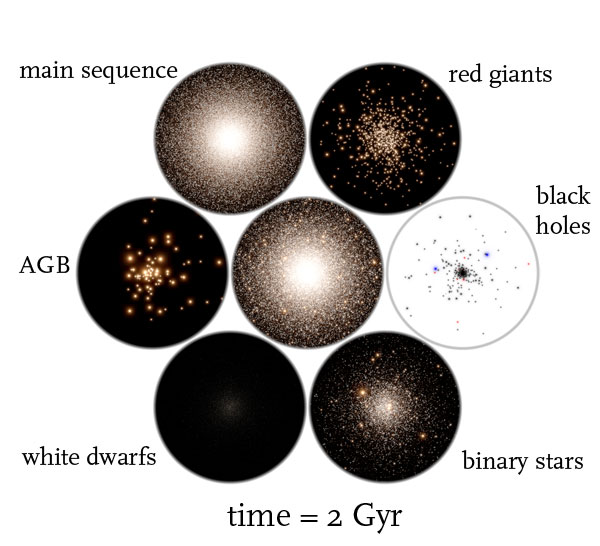 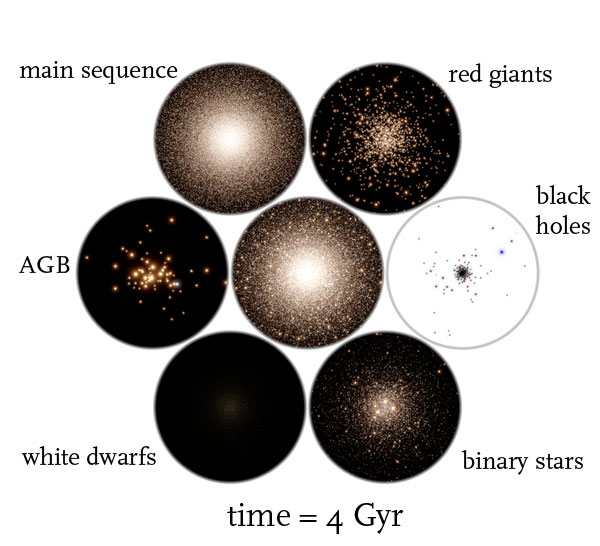 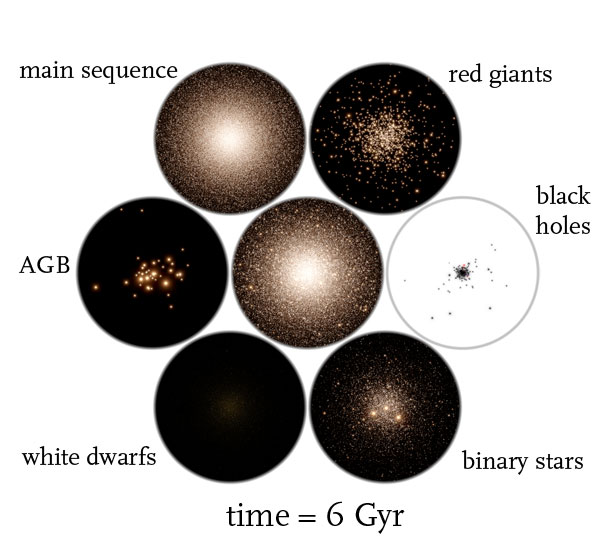 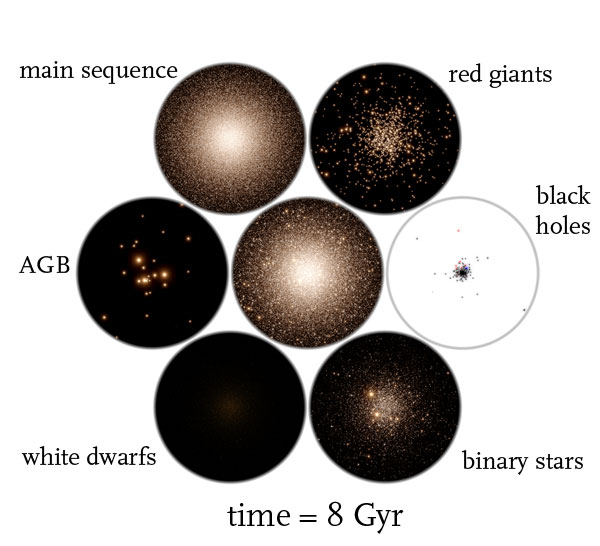 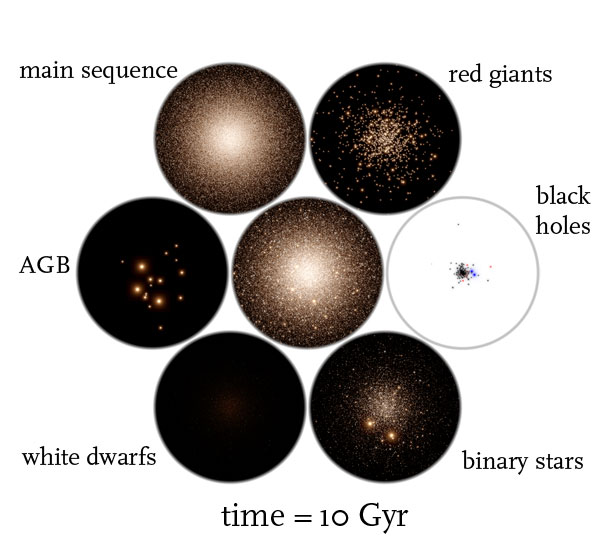 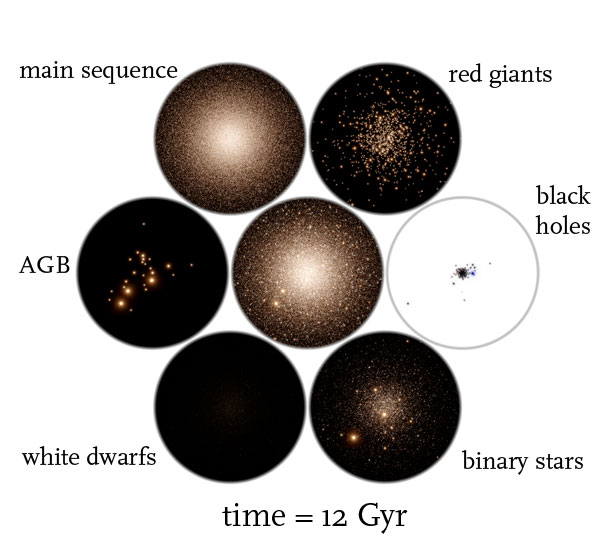 Now compare the previous simulation with the one below. You’ll notice that the two clusters differ quite a bit in how much stuff congregates in the middle over 12 billion years. How concentrated a cluster becomes, the team found, depends primarily on how top-heavy the initial stellar population is in terms of mass. The first cluster (IMF93) is less top-heavy than the second one (IMF01), which means it has fewer massive stars when the simulation begins. ("IMF" stands for initial mass function.) As a result, it has far fewer black holes (629) than the top-heavy simulation (about 2,000) and is more centrally concentrated. 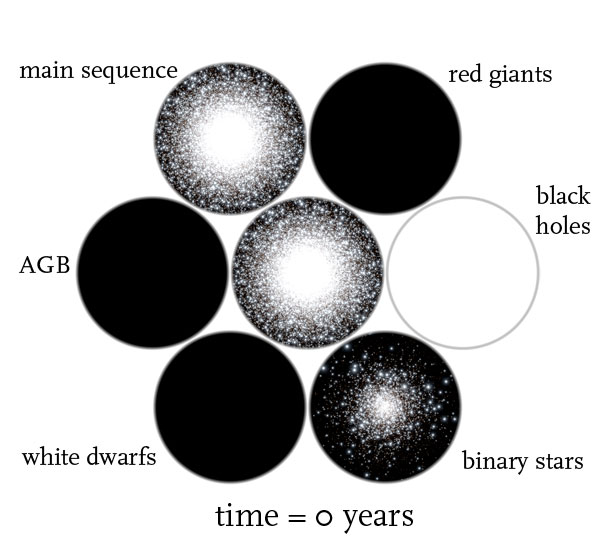 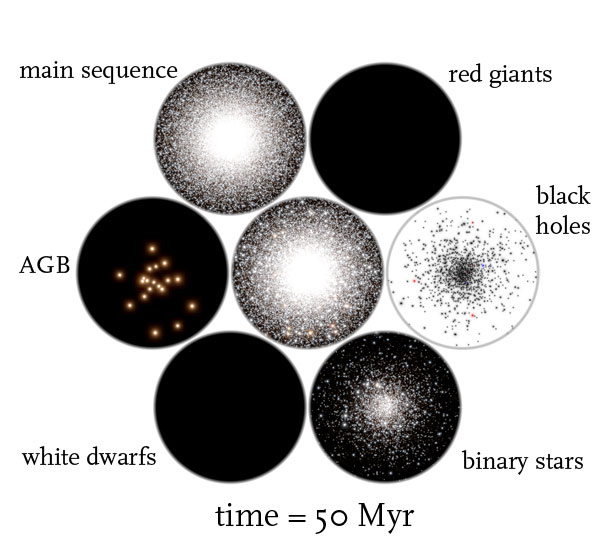 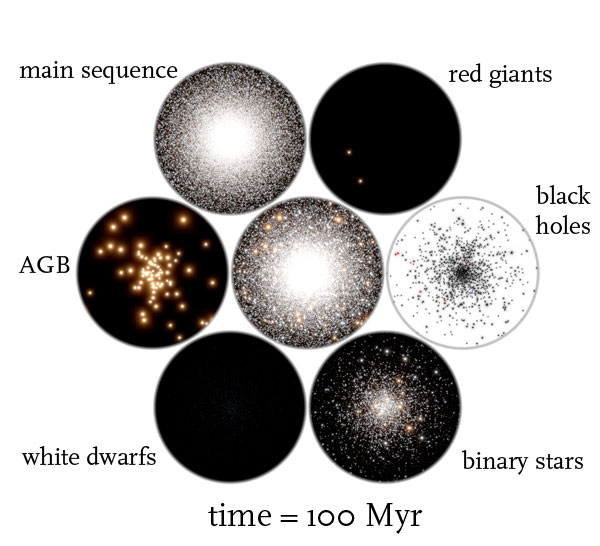 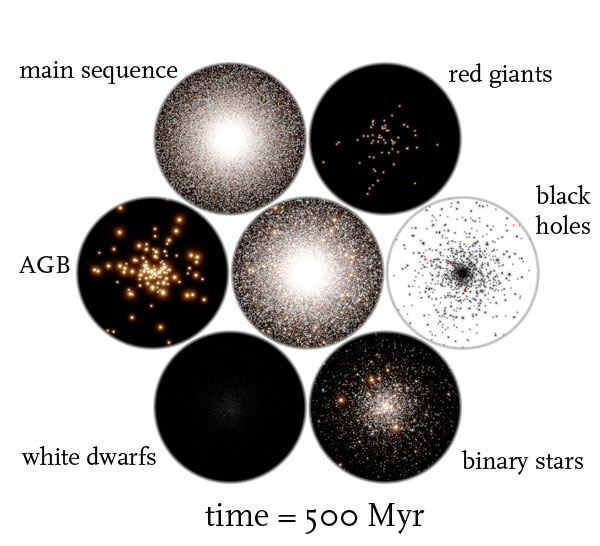 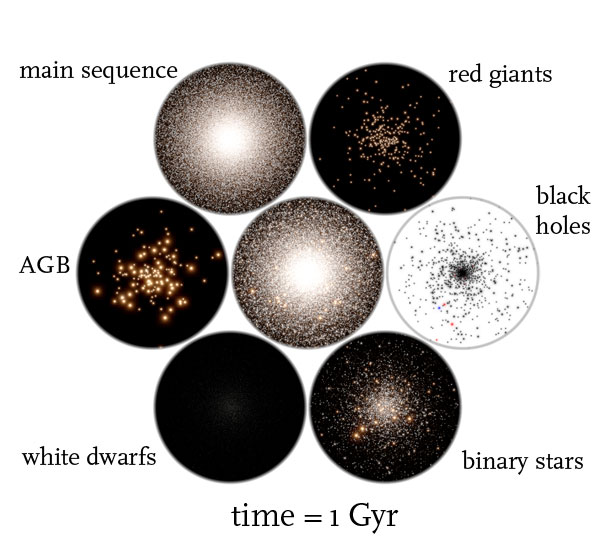 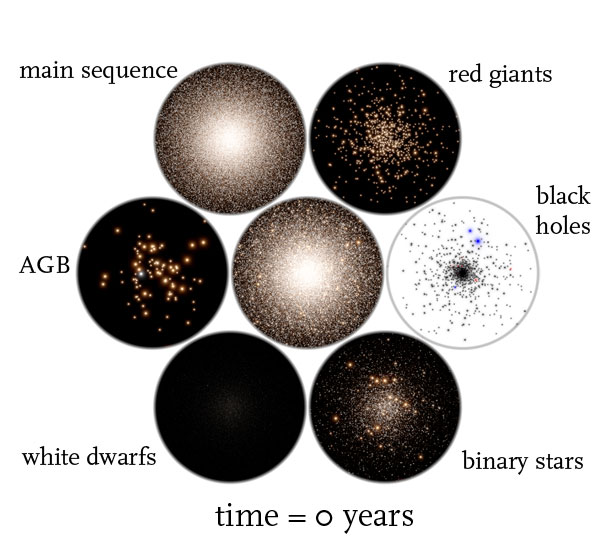 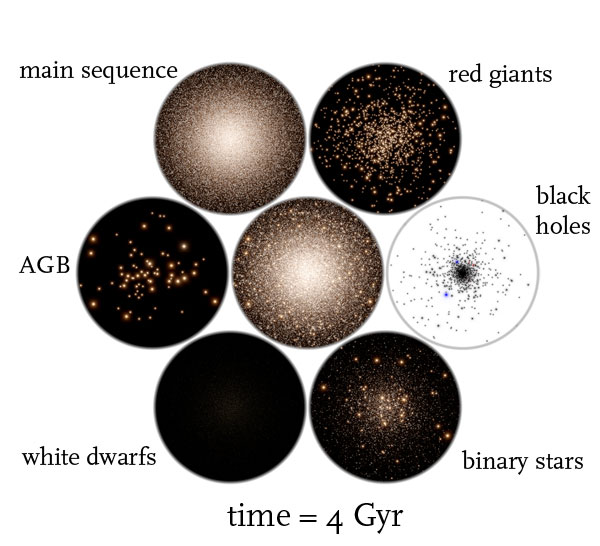 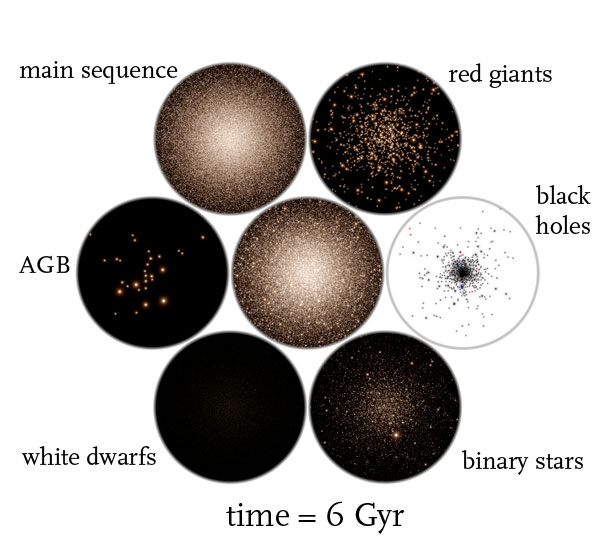 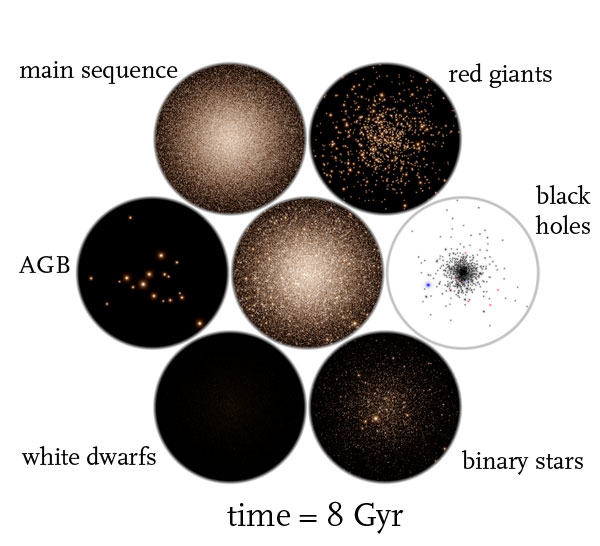 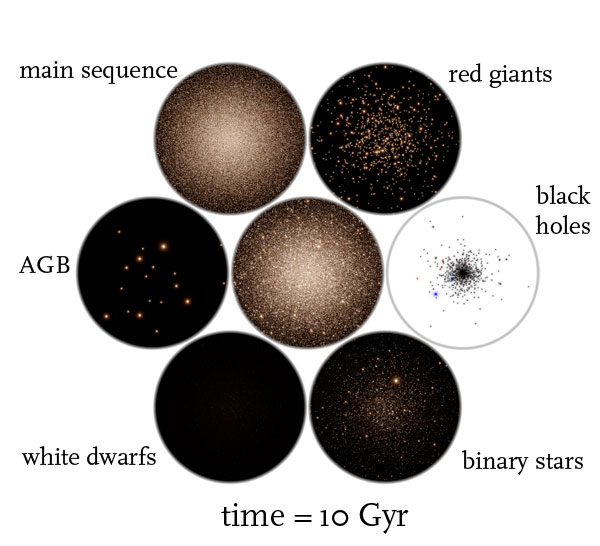 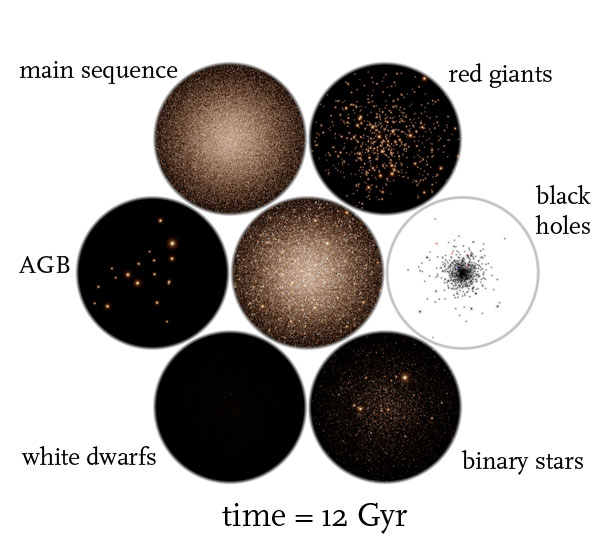