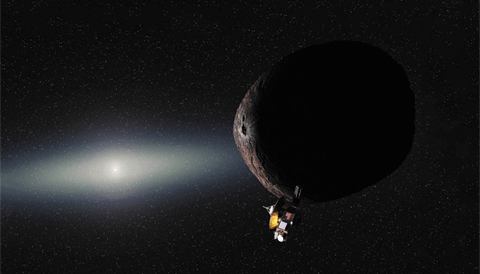 New Horizons' next target, 2014 MU69, was hard to find and remains a bear to pin down, but persistence has paid off.

As the world knows, the New Horizons spacecraft spectacularly achieved its primary mission — to explore Pluto and its moons — in July 2015 (S&T: Oct. 2016, p. 14). But all along NASA managers had counted on visiting another object farther out in the Kuiper Belt. At launch in 2006, there was no known body it could reach, yet astronomers had sound statistical arguments for why they would find such an object during the decade-long trip to Pluto.

Except it almost didn’t happen. Despite searching for years using the best telescopes on Earth, New Horizons team members failed to turn up a suitable second destination. One problem: The spacecraft was headed toward a region of sky packed with stars, and this made a dim Kuiper Belt object much harder to discover.

By 2014, New Horizons scientists realized they might not find their post-Pluto target by late summer, after which it would be too late. In desperation, they requested discretionary time on the Hubble Space Telescope. After an initial rejection and some tense back-and-forth, they gained a couple weeks’ worth of Hubble observing time.

In June 2014, this investment paid off with the discovery of two targetable objects. One of those, now designated 2014 MU69, became the spacecraft’s next destination. On New Year’s Day, 2019, this tiny world will become the most distant place ever visited by a robotic craft.

But identifying that distant blip was just the start of planning for this challenging encounter. The team needs to know the exact locations of both the spacecraft and the target, as well as something about the object’s properties — size, shape, and surface reflectivity — to take all the planned images and spectra. And it’d be helpful to ensure that the target doesn’t lie amidst a swarm of debris that might doom the spacecraft.

Fortuitously, the New Horizons team recently received some help from three faint stars that MU69 was predicted to pass directly in front of in early June to mid-July of this year. If the orbit for MU69 determined from the Hubble observations was correct, then well-positioned observers could watch each star’s light blocked for a few seconds. Those cover-ups would, in turn, reveal the target’s size and overall shape.

So the New Horizons team dispatched astronomers to observe the occultations (S&T: Oct. 2017, p. 11). The first event — visible on June 3rd from Argentina and South Africa — failed to catch the star’s disappearance. They tried again on July 10th with a dedicated flight over a remote stretch of the Pacific by NASA’s SOFIA airborne infrared observatory. Again, no luck.

These negative results at least told us where the object wasn’t, and they suggested that MU69 has no encompassing cloud of spacecraft-killing debris. But the thought that it might not be exactly on the predicted orbit, or might have properties very different from what we expected, was unsettling to those tasked with preparing for its one fleeting flyby.

Finally, on July 17th, just over two years after the Pluto flyby, five observing teams in Argentina nailed it. The results did more than refine MU69’s orbit; they also hint that it’s a supremely strange object, perhaps a double-lobed one (S&T: Nov. 2017, page 9). It’s another victory for the New Horizons team, and it promises the rest of us more frozen delights from the Kuiper Belt.

Read whether New Horizons' next target also has a moon.