Asterisms: Doodles in the Sky 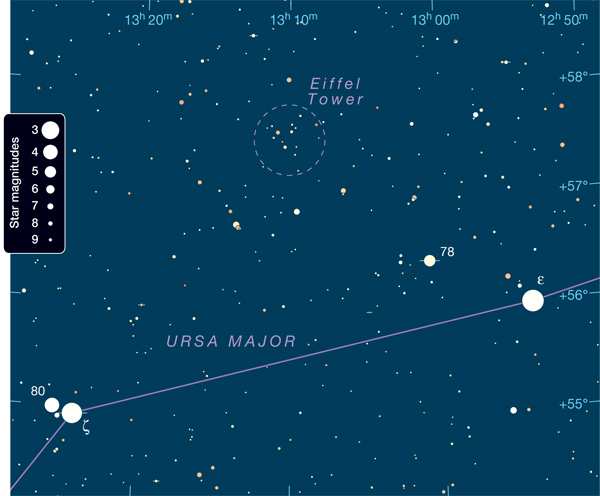 Imagine a right triangle that uses the line that runs between Mizar and Alioth in Ursa Major as the hypoteneuse. The Eiffel Tower asterism occupies the 90º corner of the triangle.
Sky & Telescope

Our brains are wired to seek patterns. We see castles in the clouds, butterflies in inkblots, and faces or even rabbits on the Moon. Amateur astronomers experience this pareidolia when gazing at the vast dot-to-dot tableau of the night sky. We imaginatively sketch figures among the stars, spawning a wealth of cosmic doodles that we call asterisms.

Let’s take a look at some of the asterisms that populate the sky at this time of the year, sticking to those that are noteworthy for the images they’ve evoked.

You’ll find the star-figure known as Jaws in the constellation Virgo, near the border it shares with Corvus. Jaws is one of my favorite asterisms. It’s just beautiful in the field of view with the Sombrero Galaxy (M104) through my 130-mm refractor at 48×. My pencil sketch shows the two as seen through the scope and also outlines the asterism. Jaws represents a skeletal shark whose most prominent feature is a toothy mouth of four stars, the brightest one gold. Its six-star spine curves northeast and is all you can see of the shark’s body, while a solitary star to the west marks the tip of its dorsal fin. Mouth to tail, our finny friend spans 27′. Well-known author Phil Harrington gave Jaws its popular name in his book The Deep Sky: An Introduction.

French amateur Laurent Ferrero keeps an internet list of interesting star groups that he’s noticed during more than 20 years of deep-sky observing. His catalog currently consists of 53 objects, some of which proved to be true open clusters. Among his asterisms, the Eiffel Tower (Ferrero 6) is thus named because its tapered form is reminiscent of this famous cultural icon. In the 130-mm scope at 37×, it’s composed of 16 stars, magnitude 8.2 and fainter, the brightest one deep yellow. The tower is 28′ tall, with its tip pointing south-southwest. The Eiffel Tower is easy to locate by picturing the right triangle that it makes with Zeta (ζ) and Epsilon (ε) Ursae Majoris in the Big Dipper’s handle. Our asterism’s discoverer is also the author of a French-language, five-volume observing guide called Splendeurs du Ciel Profond.

Just 40′ south-southwest of Arcturus in Boötes, we find Napoleon’s Hat (Picot 1). Fulbert Picot, the French amateur astronomer for whom the group is named, also bestowed its apt nickname. Through the 130-mm refractor at 23×, the emperor’s chapeau consists of seven stars ranging from magnitude 9.4 to 10.7, distributed along a bell curve. The brim of the hat is 20′ long and runs northeast to southwest. My 18×50 image-stabilized binoculars capture six of the seven stars, missing only the one at the top of the hat. Ken Hewitt-White, a contributing editor for Sky & Telescope, fittingly thinks this asterism “suggests a caterpillar humped-up in mid crawl.” Ken is probably referring to the caterpillars commonly called inchworms, since most other caterpillars don’t have the inchworm’s looping gait.

Now commonly called the Zigzag, our next asterism was introduced by Phil Harrington in Touring the Universe through Binoculars, a book affectionately known as TUB. Look for the Zigzag about 2° west-southwest of Omega (ω) Herculis. The asterism’s name describes the view through large binoculars, but it’s a wonderful area for dot-to-dot games through any telescope that offers a field of view of at least 1½°. My 105-mm refractor at 28× shows a score of 8th- to 10th-magnitude stars in a switchback, 1.3° chain. It reminds me of the beautiful Chinese dragons carried in parades, its head at the south-southeastern end. Since the tail’s brightest star gleams gold, I think of this as the Golden Dragon. At a similar magnification, the 130-mm scope plucks out more stars and turns the asterism into a flower, as outlined on my pencil sketch. On one occasion, I even fashioned a balloon animal with its stars.

Webb’s Wreath also resides in Hercules, 2.7° south-southwest of Omicron (ο) Herculis. The wreath was first mentioned in the fourth edition (1881) of Thomas William Webb’s observing guide, Celestial Objects for Common Telescopes. Its brightest star, 7th-magnitude HD 164922 (SAO 85678), adorns the wreath’s eastern side. My 130-mm scope at 63× discloses 16 additional stars, magnitudes 10.7 and fainter, outlining an 11′ × 7′ oval that leans northeast and is dented inward at the bright star. Although some skygazers call this asterism the Ruby Ring, I see the ring’s bright gem sparkling with a deep-yellow hue.

In far northeastern Hercules we find an asterism that comes from the fertile imagination of John A. Chiravalle, author of Pattern Asterisms: A New Way to Chart the Stars. Known as the Candle and Holder, Chiravalle thinks of it as the flame that lights Hercules’ way though the dark. This cute asterism sits 4.2° east-northeast of Iota (ι) Herculis, and it’s brightest star is 6th-magnitude HD 165358 (SAO 47173) in the base of the holder. The pattern’s stars are bright enough to see in my 18×50 binoculars, with the candle dangling upside-down in the sky. The sketch shows my interpretation of the Candle and Holder as seen through these binoculars, which is slightly different than Chiravalle’s. Base to flame, the asterism is 1.1° tall, and the star that marks the flame flickers with an appropriately yellow-orange hue.

We’ll find another of Chiravalle’s unique star patterns in Draco, the Dog and Stick, which Chiravalle calls “absolutely remarkable.” Its brightest star is Omega Draconis, the dog’s nose, and the next brightest is yellow-orange 27 Draconis on the back of his head. The asterism shows quite well in the 18×50 binoculars, displaying 24 stars within 1.5°, magnitudes 4.8 to 9.2. Once again, the interpretation on my sketch is a bit different that Chiravalle’s, so feel free to let your own fancy rule.

In 1961, William L. Dutton reported an asterism that he called the Engagement Ring (S&T: Jan. 1961, p. 41). Polaris, the North Star, is the ring’s brilliant diamond, and through my 18×50 binoculars, nine 6th- to 9th-magnitude stars form the band. One has to wonder if the engagement was broken, because the dented band looks as if it was vehemently thrown and damaged in some lovers’ spat. Even the diamond is chipped, as you’ll see if you look at Polaris with a telescope at 50× or more. This little diamond chip is a 9th-magnitude companion star, separated from the diamond by 18″. Overall, the Engagement Ring is about 48′ across.

Our final target is the Ring of the Nibelung (Ferrero 27) in Draco. Ferrero says its name is a “reference to Norse mythology, which says that the dragon Fafnir was the guardian of the cursed ring forged by the Nibelung, the ring that brought misfortune to the knight Siegfried.” Unfortunately, this compact asterism is not a good target for small telescopes. One of the stars looks very faint even in my 10-inch reflector. Nevertheless, this tiny ring is adorable. It’s made up of six stars and appears to be tipped away from us so that we see it as a 1.4′ × 0.6′ oval. The ring’s colorful stars make it an especially tempting target for imagers. Give it a try!