How to Get involved in Amateur Research

Only a small fraction of amateur astronomers participate in professional research, but they have made, and continue to make important contributions to the field. While some in the community may be worried that technological advances render amateur research irrelevant, Pamela Gay's feature in April's Sky & Telescope argues that backyard astronomers will continue to be essential to the research community.

There are a number of ways to get started in amateur research. Information about the various programs discussed in the article is listed below, and you can visit Sky & Telescope's resources pages to learn more about other ongoing projects. 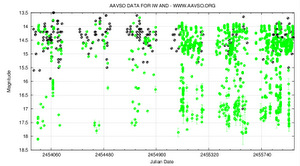 The Z CamPaign studies a type of variable star little-studied before the observing program began in 2009. The plot shows visual (black) and CCD (green) data for IW And.

The AAVSO's long history of professional-amateur collaboration is helping them adapt to that future. Along with their own photometric all-sky survey of the night sky, individual projects like the Z CamPaign keep the organization relevant as technological advances usher astronomy into the modern era. Visit AAVSO's website to learn more.

Another, more recent project is Target Asteroids!, a citizen science project designed to collect information about near-Earth asteroids before the launch of the OSIRIS-REx sample return mission in 2016. 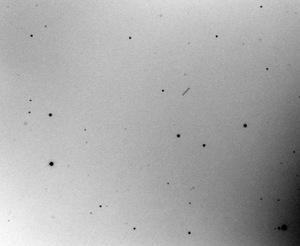 Luca Buzzi, a Target Asteroids! contributor, captured this image of asteroid (141018) 2001 WC47 as a streak among a field of background stars using a "track and stack" method, summing nine 15-second exposure images. The same images can be re-stacked to show the stars as streaks and the asteroid as a point.

So far, 100 observers have signed up since the program started in April 2012, acquiring more than 34 sets of observations, including astrometry, photometry, and even spectroscopy, for 8 asteroids. Observations are needed to aid our understanding of the asteroid population and near-Earth asteroids in particular. In keeping with the asteroid list's dynamic design, 12 new asteroid targets were added in December, including the largest main belt asteroid, Ceres, which recently passed through opposition.

If you're a member of the Astronomical League check out the League's companion Target NEOs! program. You can earn a certificate and pin by observing a particular number of asteroids from the same asteroid list.

What if you don't own your own telescope? Still want to get involved? One option is to join a local amateur astronomy club and share a telescope with other members. Another option is remote observing.

The same technological advancements that have allowed professional astronomers to build remote telescope systems — readily available high speed internet, reliable weather monitors, and easy to use software for remote operations — also allow amateur astronomers digital access to the sky. An observer in the U.S. can login to an Australian telescope and acquire a light curve of a southern hemisphere asteroid as it tumbles past the planet, and a European observer can access a still dark New Mexico sky to keep an eye on a nova.

Organizations like the AAVSO provide members access to society networks as part of their dues. And costs of commercial systems, such as iTelescope and SLOOH, remain competitive with investing in personal equipment. For instance, one might spend $7,000 on a 12-inch, Go To telescope with a digital detector, and $30 on gas to drive to a dark site for an evening's observing session. Commercial telescope networks allow you to observe the same target from home for an hour for $50 to $100 using a significantly larger telescope already at a dark-sky site.

With remote systems, amateur astronomers can observe from telescopes around the world. Hypothetically, you could even follow a given event continuously, switching from telescope to telescope as the planet rotates.

The idea of citizen science is simple: everyday people take part in activities that help advance our understanding of the universe. In some cases, citizen scientists take a passive role that involves installing monitoring hardware, like weather gauges, or software that runs in the background like SETI@Home or Einstein@Home. In other cases, members of the public help scientists sort through vast amounts of scientific data, and often short tutorial is all you need to get started.

Due to the rising popularity of citizen science, many projects are cropping up that claim to be citizen science but are actually just opportunities to complete projects with known outcomes using authentic data. While often educational, they aren't necessarily helping new science get completed.

When selecting a citizen science project to participate in, start by learning what questions the project seeks to answer. If the questions interest you, check to make sure there is a team ready to see the results through to publication. If both these things are in place, dive in and help advance science.

There are lots of projects currently running, covering every imaginable subject from planet-hunting to mapping the Moon. See our list of citizen science projects to learn more.