How To Identify Stony Meteorites in the Field 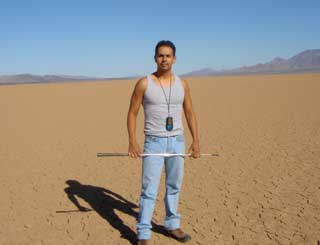 Ruben Garcia searches for meteorites with a meteorite cane in hand.

Ruben Garcia searches for meteorites with a meteorite cane.

Meteorite identification in the field is one of the most difficult things for an aspiring meteorite hunter to learn. The skill is most certainly an acquired one. But once that skill is learned, a good meteorite hunter can easily spot a single meteorite — even if it's surrounded by hundreds of Earth rocks. In fact, most seasoned meteorite hunters rely heavily upon recognizing their finds visually, rather than using lab tests.

If I have learned anything about meteorite identification in the past decade it's that there's no substitute for the real thing. Examining an actual meteorite in person is far better than simply attempting to memorize the look of a meteorite from a photo in a book. Most meteorites pictured in books or magazines are fantastic examples — many are even museum-quality specimens. Unfortunately, the average meteorite may be highly weathered, dirty, or even broken.

This highly-weathered chondrite could easily be mistaken for a terrestrial rock.

Stony meteorites known as chondrites are by far the most common type of meteorite found. Some characteristics of chondrite meteorites — fusion crust, flowlines, and regmaglypts — weather away quickly and are usually found only on stones that haven't been on Earth for very long. Other features such as stress fractures, nickel-iron flecks, and rust spots can be subtle but telling attributes of a typical chondrite meteorite that has been on Earth for quite some time. Since the great majority of meteorites we find are not fresh falls, it makes sense that a novice meteorite hunter will want to learn to recognize the following characteristics. 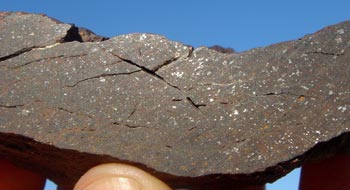 This meteorite has been cut and polished to reveal nickel-iron flecks.

Stress Fractures: A meteorite can exist in outer space for millions of years without experiencing corrosion. But that's not the case on Earth, where a meteorite will begin to age as soon as it hits the ground. In summer, moisture that has worked its way into a meteorite will cause it to contract, and in winter, when frozen, it will expand. All this expanding and contracting can causes stress fractures to appear on a meteorite's exterior within just a few years. Over time, they can literally cause a meteorite to crumble into pieces.

Nickel Iron: Most chondrites contain tiny flecks of nickel iron sprinkled throughout. For this reason, meteorite hunters often use metal detectors in areas where meteorites are likely to be found. A chondrite's high nickel-iron content makes it adhere to a strong magnet. But most meteorite hunters use their "meteorite cane" — a magnet glued to the bottom of a long pole or walking stick — more as a tool to pick up potential meteorites than to definitively test a specimen. Be careful, as hematite (a common terrestrial iron oxide) is black, heavy for its size, and may also stick to a magnet. It's the terrestrial mineral that is most often mistaken for a meteorite in the field. 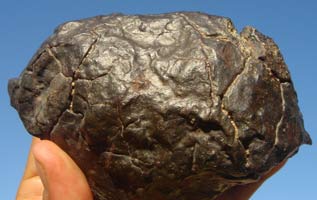 Rust Spots: Under the harsh conditions (wind, water, cold, and heat) that a meteorite encounters on Earth, it ages very quickly — rusting and turning brown. As one might imagine, it's the nickel iron flecks on the outside of the meteorite that tend to rust more quickly. This gives most chondrites an obvious freckled appearance.

Experienced meteorite hunters have learned to search any given area with the Sun to their backs. This technique has a way of illuminating a meteorite and helps it to stand out among a multitude of Earth stones. Using this technique you'll notice that most stony meteorites look almost shiny compared to the surrounding stones. Characteristics such as stress fractures and rust spots on a baseball-size meteorite can often be seen from 20 to 30 feet away. 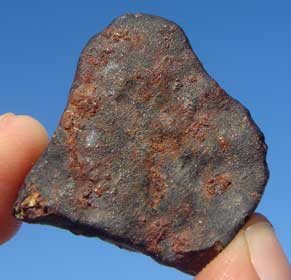 This chondrite has rust spots, a result of its time on Earth.

Finding meteorites in the wilderness isn't easy. Don't be discouraged if at first such a task seems impossible. Persistence and patience will pay off eventually. After all, some of the world's very best meteorite hunters can go days or even weeks without finding an elusive rock from space.