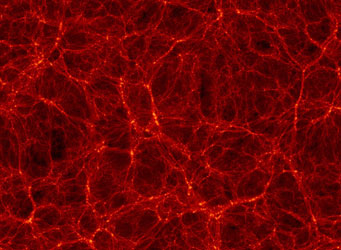 On the surface, it might seem totally impossible for a computer program to simulate such a long and complex process as the evolution of the universe. After all, 13.7 billion years have elapsed since the Big Bang, an immense span of time that no human mind can truly grasp. And the observable universe contains more than 100 billion galaxies.

A snapshot from the Bolshoi simulation, showing what the universe's dark matter should look like at the present time.

But as the cover story of Sky & Telescope's July 2012 issue explains, the latest computer simulation of the universe, known as Bolshoi, produces a model universe that bears a striking and uncanny resemblance to the real thing. Starting with initial conditions based on the known distribution of matter shortly after the Big Bang, and using Einstein's general theory of relativity as the "rules" of the simulation, Bolshoi predicts a modern-day universe with galaxies lining up into hundred-million-light-year-long filaments that surround immense voids, forming a cosmic foam-like structure that precisely matches the cosmic web as revealed by deep galaxy studies such as the Sloan Digital Sky Survey. To achieve such a close match, Bolshoi is clearly giving cosmologists a fairly accurate picture of how the universe actually evolved.

Listen to a 12-minute excerpt of an interview with coauthor Joel Primack, conducted by S&T Editor in Chief Robert Naeye. Primack talks about the history of cosmological computer simulations, how we have entered an era of precision cosmology, and updates on the efforts to understand the nature of dark matter and dark energy.

Fly through the Bolshoi simulation of the universe:

Watch one possibility for how the Milky Way might have captured its two satellites, the Large and Small Magellanic Clouds: