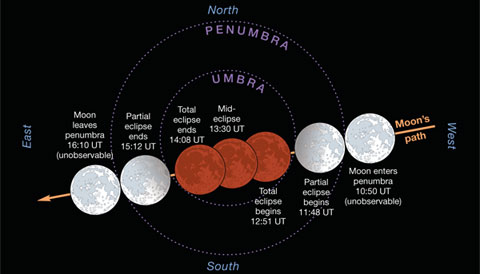 The Western United States, including Alaska and Hawaiʻi, has the best view.

On Wednesday, January 31, 2018, the first total lunar eclipse in more than two years graces the skies above North America. But unlike the previous one, this eclipse is positioned perfectly for the West Coast and Pacific Rim, while the East Coast and the Atlantic Regions will see little, if any, of the show.

The eclipse occurs in the morning for western North America and the near Pacific. For the East Coast, the Moon sets before totality arrives, so the best you’ll see from, say, Pittsburgh, is a partial eclipse. Viewers in the western contiguous United States (roughly west of a line drawn from Grand Forks, North Dakota, to El Paso, Texas) will have good views of most of the action, with the Moon setting at the end of or soon after totality. The farther west/northwest the viewer, the better the event. Los Angeles sees the end of totality in a brightening sky; the Moon sets before the second partial stage is complete. More northwesterly Seattle sees almost the entire eclipse, missing only the subtle end stage. Honolulu and Anchorage see every stage in an enjoyably dark sky. Alaska, Yukon, most of British Columbia, the Northwest Territories, parts of Nunavut, and Hawai‘i see the eclipse from start to finish.

Totality falls on the evening of January 31st for eastern Asia and the far Pacific. China, Mongolia, Japan, Korea, Russia, New Zealand, the Philippines, and most of Indonesia and Australia will see the eclipse in its entirety. (Perth, you miss the opening minutes of the event, but this is no big deal as the subtle shadow in the early stages of a total eclipse isn’t visible to the naked eye.)

The map and diagram with timetable below will give you an idea of what to expect at your location. Stages of the Eclipse

There are five stages of a total lunar eclipse. The first stage begins the moment the Moon’s leading edge slips into the penumbra. Because the Sun isn’t a point source, the cone-shaped shadow cast by the Earth has two components: the penumbra and umbra. The penumbra shadow is about 17,000 km (10,600 miles) wide and is the lighter of the two, cast when Earth covers only part of the Sun. We won’t see any of this happen, though, as the shading isn’t detectable until it’s about halfway across the Moon. Look for a darkening on the eastern side of the Moon.

Penumbral shading becomes deeper as the Moon moves toward the first partial phase, which begins when the Moon’s leading edge enters Earth’s umbra. The umbral shadow cone extends some 1.4 million km (870,000 miles); at the distance of the Moon’s orbit, the cone’s width is about 9,000 km (5,600 miles). When the Moon is within Earth’s umbral cone, no direct sunlight falls on its surface, so the umbra is darker than the penumbra.

The third stage of the eclipse, totality, starts when the trailing edge of the Moon enters the umbra. Timing this can be iffy, as the Moon’s edge isn’t as clearly defined as that of a smooth sphere, but once the last peak is in the umbra, totality begins. The length of totality for this year’s lunar eclipse will be 1 hour 16 minutes, slightly longer than the one in 2015, which lasted 1 hour 12 minutes. The longest duration of totality for a lunar eclipse is about 1 hour 45 minutes.

As the trailing edge of the Moon slips out of the umbra, we reverse the play, moving from totality through a second partial and then penumbral phase.

No two lunar eclipses are the same. You might notice that the umbra isn’t completely dark, even during totality. This is due to atmospheric refraction of the orange-hued light of sunrises and sunsets around Earth's day-night terminator into the shadow. The color seen during a lunar eclipse is also affected by how deeply the Moon goes into the umbra, as the umbra’s center is darker than its edges. Atmospheric conditions can affect the hue; for example, ash from a volcanic eruption can result in a darker red, gray, or black color.

Look around the sky during totality. Regulus, the brightest star in Leo, will be some 20° left of the eclipsed Moon. The Beehive Cluster (M44) will be around 5° upper right of the Moon.

There will be one more lunar eclipse in 2018, but it won’t be visible from North America. Central Africa and central Asia will have prime viewing for the July 27th event.

The weather gods have been cruel "down under" here at 46 South, NZ for most of the last observable lunar eclipses. However, It's probably redemption time, so I'll have my scope ready and waiting for this one. 77 minutes of totality, I understand.

Let's hope we ALL get to see it!

The eclipse will be of a "Blue Moon." That only happens about once in 30 blue moons!