More on Seagrave Observatory and its restored Clark refractor 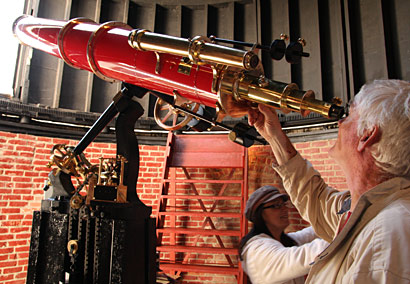 The Seagrave 8-inch Clark refractor, in like-new condition after 134 years.

The Seagrave 8-inch Clark refractor, in like-new condition after 134 years.

When I was editing Francis O'Reilly's article on the restoration of Seagrave Observatory's antique Clark refractor for the August 2012 Sky & Telescope, I wanted more room! There were so many pictures and further information about the historic telescope, the Skyscrapers club that owns it, and its masterful restoration after decades of decline — but only four pages of space available.

• Loads and loads of high-res pictures of the the restored telescope showing fine details of its mounting, drive, and parts. Click thumbnails for large views, which you can enlarge further to full resolution. Steampunkers, eat your hearts out. Courtesy Jim Hendrickson.

• Video of the remade flyball governor in action on the Clark telescope mount. Before electricity (and especially before AC power with a 60-Hz frequency that's highly regulated), mechanics relied on governors to regulate speeds of machinery. The faster the governor spins, the more its weights swing outward by centrifugal force, thus slowing the spin back down. Such a system provides precise speed control under varying forces and loads, no electronics required.

• The website of the Skyscrapers club in North Scituate, RI — owners, restorers, and stewards of the 8-inch Clark and other scopes on site.

• More history of Frank Seagrave, the Clark, and the club, from 1876 to the present.