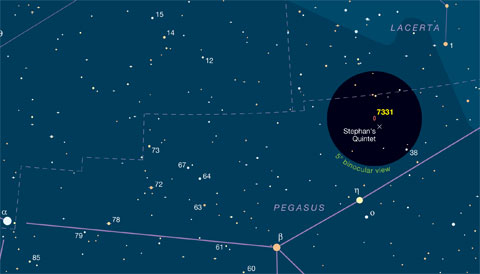 Galaxies in Pegasus, the Winged Horse, have a certain reputation: They’re challenging. With famous members like Stephan’s Quintet and Einstein’s Cross, you could be forgiven for thinking that only observers with large scopes need apply.

There’s at least one exception, however: NGC 7331 (Caldwell 30), a big, beautiful spiral galaxy in the northern reaches of the constellation. To find NGC 7331, draw a line from Mu (μ) Pegasi to Eta (η) Pegasi and straight on for another 4½°. The galaxy also forms the northeastern corner of an imaginary right triangle with Eta Peg and Pi2 (≠2) Peg.

With a visual magnitude of 10.4, NGC 7331 won’t necessarily be an easy catch, especially in light-polluted skies. But observers in only moderately dark skies have spotted it with 7×50 binoculars. So far I’ve needed at least 10×50s to pull it out, and 15×70s are better still — but when is that not true? It helps that the galaxy is big, 10′ × 4′, which is comparable to the largest Virgo galaxies. The large apparent size (as these things go) corresponds to ample proportions in real life. With a diameter of 130,000 light-years, NGC 7331 is larger than our own Milky Way.

NGC 7331 isn’t just unusually bright for a Pegasus galaxy, it’s also an astrophysical oddball. Several recent studies suggest that the galaxy’s central bulge rotates in the opposite direction of the spiral arms.

I have one more bit of homework for you: Go online and find a high-res photo of NGC 7331. One of my favorite was taken by Vicent Peris at the Calar Alto Observatory in Spain — it looks like the cover of a sci-fi novel, but it’s real. How wonderful that we can plumb the depths of intergalactic space with handheld instruments.