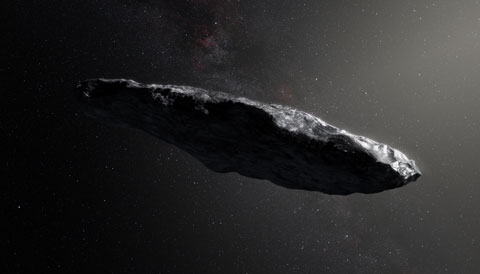 The first interstellar object seen entering the solar system is really quite bizarre.

In a sense, those of us who study planetary systems expected ‘Oumuamua (S&T: Feb. 2018, p. 10). Planet formation is messy and involves chucking a lot of material beyond the clutches of the central star. We’ve long thought a steady-state population of wanderers must exist between the stars, and it was just a matter of time until we became instrumented, skilled, or lucky enough to find them entering our own system.

This one came without warning and dashed through, making it hard to get a good look. That’s no coincidence — the great velocity reveals its interstellar origin and destiny. Fortunately, we did get some spectra and a light curve. The spectrum was “normal,” the bland, reddish color of an ancient, radiation-darkened surface, familiar from the outer solar system and Kuiper Belt.

The light curve, however, shows extreme variations in brightness. The initial interpretation: a rapidly spinning object with a most irregular shape, one with a ratio of between 10 and 5 to 1 between the longest and shortest axes, greater than or comparable to the most elongated solar system objects. This is bothersome. Why should the first interstellar drifter have such a weird shape?

The light curve doesn’t require such a ridiculous configuration if, instead, the object has highly contrasting surface markings. What if one side is extremely bright and reflective, and the other as dark as charcoal? We do know of such objects, such as Saturn’s moon Iapetus. Yet these stem from “leading and trailing” hemisphere differences on moons orbiting in a fixed orientation, picking up debris like windshields sweep up bugs, or from migration of icy material away from warmer areas.

Neither scenario works for a rapidly spinning interstellar object. So does ‘Oumuamua have a very strange shape or a very strange surface pattern? Occam’s razor doesn’t help here. Why should it have either?

There’s something else idiosyncratic about ‘Oumuamua. We expected it to be cometary, because the planetesimals ejected from forming planetary systems should (we think) consist mostly of icy material. It’s much rarer and more difficult to eject rocky or metallic shards that form closer to a star and therefore deeper in its gravitational well. But ‘Oumuamua is not a comet. When it swung close to the Sun, it exhibited no sign of any gas or dust emission. Also, its atypical shape and brisk rotation imply a strong and rigid object, most likely rocky.

Actually, it’s not quite true that there aren’t any local objects with such an unusual light curve. However, they’re all made by human hands. Could ‘Oumuamua be some sort of extraterrestrial artifact?

We want to bat this question away, lest we open the floodgates, but there’s no ironclad reason to reject it. Sure, extraordinary claims require extraordinary evidence, and there’s no basis on which to believe this is an alien construction. But the claim that this odd body could conceivably be an ET artifact is not all that extraordinary.

Comparisons to our own creations don’t tell us much. This isn’t a terrestrial rocket coated with chipped aluminum paint. But we already knew that. Chances are it’s just a chunk of rock or metal that’s been wandering the galaxy for way too long. But still, I can’t help but wonder. Why is it so peculiar, and what does its unexpected quirkiness imply about the nature of other planetary systems?

Fortunately, we won’t have to wait too long to learn more. We’ll likely never get another good look at ‘Oumuamua, but we can expect more such discoveries soon, providing needed context for the curious nature of our first interstellar guest.