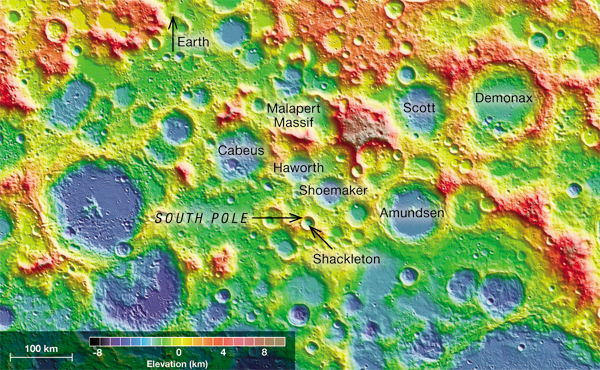 Spacecraft-borne laser altimeters have mapped the topography near the Moon's south pole. High points on the rims of Malapert and Shackleton receive sunlight about 90% of the time.
NASA/Goddard Space Flight Center

If we ever try to live on the Moon, the best locations will be polar mountains bathed in nearly continuous sunlight.

This is the time of year when we become keenly aware that Earth’s equator is inclined 23½° to the plane defined by its orbit around the Sun. The solstice fell on June 21st at 4:24 Universal Time (12:24 a.m. Eastern Daylight Time), and that’s when the northern pole of our planet’s spin axis is maximally tilted toward the Sun.

In addition to causing seasons, this axial tilt (known as obliquity) allows sunlight to fully illuminate the poles — periodically even at midnight — so that over a year, remote-sensing satellites can image the entire surface of our planet.

The Moon, however, is tilted only 1½° with respect to the ecliptic, and hence the Sun is always near or just below the horizon as seen from its poles. In fact, the Sun never rises above the rims of some deep polar craters, and so their floors receive very little direct sunlight, if any at all. Thermal maps created by the Diviner instrument on NASA’s Lunar Reconnaissance Orbiter (LRO) show that the always-dark floors of these craters are some of the coldest locations in the solar system.

Offsetting this absence of light are some nearby polar mountains that nearly always bask in sunlight. The pioneering German lunar mapper Johann Heinrich von Mädler was the first to realize this, but it was French astronomer and author Camille Flammarion who, about 40 years later in 1879, romanticized the idea by calling these always-sunlit places pics de lumière éternelle – peaks of eternal light.

Actually, no lunar real estate is 100% illuminated, though a few peaks are lit by the Sun more than 90% of the time. In any case, these locations are always difficult to observe and identify. Even when seen with favorable lunar libration, the extreme foreshortening created by looking sideways at the lunar poles compresses circular crater rims into apparently straight ridges.

However, using images from the lunar-orbiting Clementine, Kaguya, and LRO spacecraft, which have been able to look straight down on the poles, scientists have disentangled these distortions and mapped lunar locations that are nearly permanently shadowed and, conversely, rarely so.

For a telescopic observer, identifying the “pics” near the lunar south pole is especially difficult because the area is heavily cratered. The most continuously sunlit peaks typically occur as small pieces of rim crests and ridges around Shackleton, a 21-km-wide crater located right at the pole. But I have yet to come across an Earth-based image of Shackleton.

Instead, peaks on the rims of the craters Cabeus and Malapert are the most southerly named features that can usually be identified telescopically when librations tip the south pole toward Earth. They’re both in view in the image at the top of the facing page.

Most conspicuous are informally named Malapert Massif (a 5-km-high crest along that crater’s southwestern rim) and other isolated high points that are parts of the rim of the enormous farside basin called South Pole-Aitken. Cabeus is a little easier to spot. In 2009, NASA’s LCROSS probe crashed onto its permanently shadowed floor, discovering near-surface deposits of water and other volatiles (S&T: Feb. 2010, p. 28).

Observing pics near the north pole is far easier because the topography is much flatter and appears less cluttered with craters and mountains. The view at lower right shows the longest and easiest-to-see peak of eternal light. The bright ray crater at far left is Anaxagoras — ignore it. Instead, look toward the right at Scoresby, a fresh, somewhat larger (56-km-wide) but not-as-bright crater at 78° north. A distinguishing feature is the small bright crater on its inner rim.

Immediately poleward are the overlapping, flat-floored twins Challis and Main. Continuing north, look for another flat-floored crater Gioja (42 km wide, 83°N). Beyond that are prizes not often seen: Byrd (94 km, 85°N) and Peary (70 km, 89°N). The actual north pole is on the brightly illuminated far wall of Peary — it is nearly constantly draped with sunlight.

A very favorable north-polar libration — just under 7° — occurs on May 24th. Unfortunately, the Moon is then a hair-thin waning crescent only 1.3 days from new. You might try one day earlier, May 23rd, when the libration is closer to 6°.

In Flammarion’s day, the pics de lumière éternelle were romantic oddities, but they could soon become valuable real estate. Their summits are washed with nearly constant grazing sunlight that solar-cell arrays could use to generate electricity for lunar bases. The temperature would stay nearly constant at roughly –50°C (–60°F), which is a brutally frigid winter day in Alaska but rather temperate for a lunar location. The deep, permanently shadowed craters nearby likely contain enough water to drink, irrigate crops, and break down into hydrogen and oxygen for use as rocket fuel. They could be the oases in an otherwise completely arid land.

A recent investigation by Martin Elvis (Harvard-Smithsonian Center for Astrophysics) and two colleagues suggests that the uniqueness of these pics might lead to a rush to claim them. The Outer Space Treaty of 1967 states that the Moon is the “province of all mankind” and prohibits nations and corporations from claiming ownership of lunar land.

But 50 years ago we had no detailed knowledge of these polar peaks. Elvis and his co-authors speculate that their value as both energy and water resources could lead to creative interpretations of the Treaty. For example, one provision states that any lunar station’s “delicate scientific experiment” would require others to keep away so as not to interfere. So you might want to get out your telescope and take a look at this polar property before the “no trespassing” signs go up.