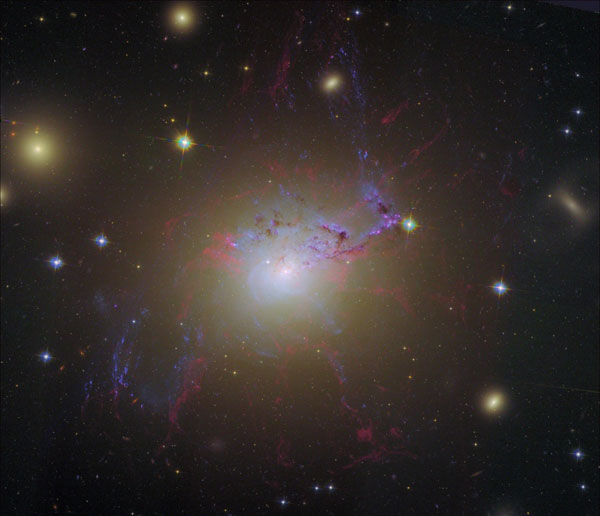 NGC is the brightest, most massive, and centralmost galaxy of the Perseus Cluster. It, too, is surrounded by thin filaments. Read more in this October 2013 APOD.
Image: Hubble Legacy Archive / ESA / NASA, Processing: Al Kelly

Looking for a new deep-sky challenge? Turn your scope toward ACO 426, the Perseus Galaxy Cluster.

In 1958, American astronomer George Abell published his catalog of galaxy clusters compiled from the First Palomar Sky Survey (POSS I), which was completed in the 1950s with the 48-inch Oschin Schmidt telescope at Palomar Observatory above San Diego, California. The original edition of Abell's catalog listed almost 3,000 rich galaxy clusters with a redshift less than 0.2 ("rich" meaning at least 50 constituent galaxies and a redshift of less than 0.2 correlating to a distance of 85 to 850 megaparsecs). More recent supplements have raised the number of included galaxy clusters to 4,073.

In our January issue, Contributing Editor Ted Forte provided a in-depth look at one of those clusters. Abell (ACO) 426, also known as the Perseus Galaxy Cluster. ACO 426 contains thousands of galaxies, making it one of the most massive objects in the universe. We're providing here a table of positions, magnitudes, and other data to help you plan your own galaxy cluster observing session. The data table is also available for download as a .pdf or an Excel file.

Clusters from the Abell catalog(s) are often listed as "Abell" objects (i.e., Abell 426), but you might also find "ACO" included in their designations (i.e., ACO 426). Abell  published a catalog of 86 planetary nebulae in 1966, so Abell 1 could just as easily refer to the first plantary on his list as the first galaxy cluster. ACO, an acronym based on the surnames of the co-authors of the 1989 edition of the catalog, George Abell, H. Corwin, and R. P. Orowin, is often used for the galaxy cluster catalog to prevent confusion.