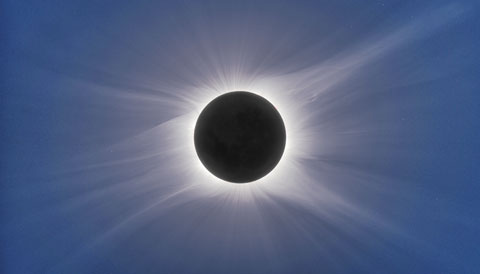 When limited time and a powerful on-shore wind scrapped the author’s eclipse photography plans, he simply propped his telescope on a rock wall and hit the shutter button — with stunning results.

A large print of the 2010 Easter Island eclipse graces my office wall. After 40 years and 20 eclipse-chasing adventures (including 16 into the paths of totality), I finally have a picture to hang on the wall, or so I tell visitors. Nevertheless, it’s not the picture’s wall-worthy credentials, but rather the crude method in which it was made (due to a last-minute change in plans), that inspired the title of this article.

For the record, I’ve witnessed total solar eclipses from land, sea, and air. My photography preparations have also run the gamut, ranging from several years spent designing, building, and shipping a half ton of research equipment into the Sahara Desert in 1973 to frantically tossing gear into a suitcase a decade later as I headed to Indonesia on less than 24 hours notice (no kidding!). Recently, however, my globe-trotting pursuits of the Moon’s shadow have been like those of most other eclipse chasers — travelling with an organized tour and subject to the normal restrictions for airline baggage.

As such, I spent several weeks before the August 2008 eclipse in China building the portable setup pictured. The outgrowth of numerous discussions with other eclipse photographers, especially my colleague Roger Sinnott, and past experiences, it’s a variant of a polar telescope fed by a siderostat. Since the scope’s optical axis lies on an imaginary extension of the siderostat’s polar axis, the mount has to be made for the latitude of the observing site.

Because the telescope (a Tele Vue TV-85 objective fitted to my own lightweight tube assembly) remains fixed, I was able to make an exceptionally rigid, yet lightweight mounting from little more than a few wooden sticks — I dubbed it the Tinker-Toy mount. I fashioned the siderostat around a polar drive scavenged from a broken German equatorial mount made by Carson Telescopes. Best of all, the whole setup disassembles to fit in a carry-on suitcase that meets airline size and weight requirements (and provides a bit of entertainment for airport-security personnel).

In addition to being compact and lightweight, this setup keeps the camera at a comfortable position to look through and operate. One downside of a fixed polar telescope, however, is that the sky appears to slowly rotate at the focal plane, but this is of little concern during the brief exposures used for an eclipse.

Almost to my surprise, the equipment worked exceedingly well in China. Nevertheless, the whole Tinker-Toy structure was in a hotel trash can a few hours after the eclipse since it was only good for the latitude of my site in China. Before the Easter Island eclipse rolled around in July 2010, I made a new version of the Tinker-Toy mount. In addition to the new angle of the polar axis, its wooden pieces have a little more “polished” look about them.

Unfortunately, I never got to use it. Weather and logistics delayed my arrival at the observing site, and I wasn’t sure there would be enough time to prepare a flat patch of ground for the setup. Moreover, a powerful wind was constantly blowing off the ocean, and I feared it would shake the relatively lightweight mount. So, at the last minute, I had to devise a “Plan B.”

My best option was to simply prop the telescope’s front end on a convenient stone wall and mount the camera on a tripod, which served as the back support. Calling the arrangement crude is an understatement, but it was extremely stable in the blowing wind. That was the good news. The bad news was that my exposures were made with a non-tracking telescope; something that produced only mediocre results when I photographed the rushed 1983 Indonesian eclipse with a similar setup using film.

But the picture at the beginning of this article speaks for itself. Digital photography is clearly a game changer for solar-eclipse photography. You can obtain truly excellent results with a non-tracking telescope; at least when working at focal lengths up to the 595 millimeters I was using (and perhaps even longer). Vibration has probably ruined more eclipse pictures than clouds, and the culprit is almost always traced to the lightweight tracking mounts that many people tote along on eclipse trips. There is no end to the ways a fixed telescope can be solidly mounted. Old habits die hard, and I may have to fight the urge, but I suspect that I’ll forgo tracking at upcoming eclipses. If I can duplicate the results I got on Easter Island in the future, I’ll be a very happy eclipse chaser indeed, not to mention one who can travel with a much lighter load.

One of the biggest advantages that the digital revolution brings to eclipse photography is image processing, as my S&T colleague Sean Walker explains in this article that tells how he processed my Easter Island exposures. But digital cameras themselves have played a major role in letting people shoot better pictures, and it has to do with more than just the increased sensitivity of digital detectors.

Most of today’s DSLR cameras offer features that are tailor-made for eclipse work. Foremost among them is automatic exposure bracketing. The key to making a dramatic image of totality is combining a set of images made with varying exposures that record different levels of coronal brightness to advantage. In the days of film, this meant fumbling with a camera’s shutter-speed dial in the twilight illumination and fleeting moments of totality. You’ll need to check your camera’s manual to learn if and how your camera handles bracketing, but I know that it’s available with many brands of DSLRs.

For example, my Nikon D700 used on Easter Island and the D300 I used in China allow auto bracketing of up to nine frames with as much as a full exposure stop between each frame. As such, I can set the shutter speed to 1/30 second and shoot a sequence that runs from 1/500 to ½ second without ever having to touch the camera. Furthermore, by switching the camera from single-exposure to continuous-shooting mode, I can simply hold down my remote-release button and the camera will run the nine bracketed frames as a continuous burst that stops when it’s done — something that takes only three seconds to accomplish for the sequence above.

I highly recommend that eclipse photographers page through their camera manuals looking for other features they might find useful. That’s how I stumbled upon one that’s buried deep in the shooting menu of my Nikons (and probably available in other models too). Called “exposure delay mode,” it inserts a pause of about one second between the time the mirror flips up and the shutter opens. This lets any mirror-induced vibration in the telescope die down before the exposure is made. The delay adds to the total time it takes to make an auto-bracketed sequence, but it’s well worth it when shooting at long focal lengths that exaggerate the effects of vibration.

Many of today’s cameras are packed with features that typical photographers might use rarely, if at all, so it’s easy to forget that they exist. It’s a good reason you should check for unusual features buried in the menus of your own camera. I can’t think of many situations where a nine-frame bracketing sequence or the exposure delay mode would come in handy for conventional photography, but they’re so useful for eclipse shooting that it makes me wonder if an amateur astronomer was part of Nikon’s design team. Maybe you’ll find similar features tucked away in the digital recesses of your camera.