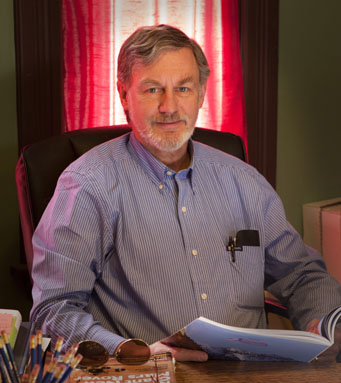 For the past several years, thousands of amateur astronomers around the world have recorded brightness observations of the enigmatic eclipsing binary star Epsilon Aurigae. They used everything from their naked eyes to sophisticated electronic detectors. Astronomers have known for nearly two centuries that the star dims by nearly a full magnitude every 27 years, with the eclipses lasting about two years. What causes the dimming?

This system is also of keen interest to professional researchers. Leading the charge is Dr. Robert Stencel of the University of Denver, known as “Dr. Bob” to many of the amateurs that he works with to coordinate observations of Epsilon Aurigae. Dr. Bob authored the feature article “An End in Sight” in the March 2012 issue of Sky & Telescope. This article describes the latest observational results during the 2009-11 eclipse. Four accompanying sidebars describe how amateurs contributed critical data to help scientists such as Dr. Bob unravel some of Epsilon Aurigae’s deepest mysteries.

Dr. Bob recently took time out of his busy schedule to talk with S&T editor Robert Naeye about Epsilon Aurigae. Part 1 of this conversation covers what astronomers have learned about this binary star from the intensive observations made during this recent eclipse. In Part 2, Dr. Bob talks about his experiences working with amateur astronomers, and their tremendous and growing ability to contribute to cutting-edge scientific research. Both parts last about 13 minutes.