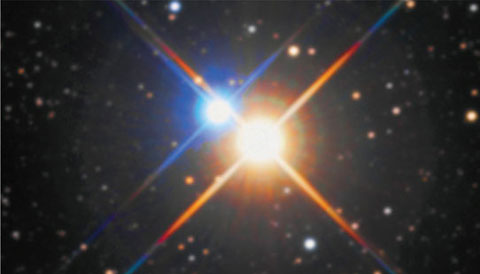 Point your telescope towards these gems of the late-summer sky.

Observing multiple stars is a joy. They come in varied combinations of brightness and color, they often have tantalizing qualities to spark the imagination, and you don’t need dark skies or a big telescope to admire them. Let’s immerse ourselves in the wonders some of the best and brightest offer, each labeled on the all-sky chart at the center of this magazine. They’re also among what I affectionately call Kaler’s stars, stars with fascinating bios on Jim Kaler’s Stars website, which I’m pleased to credit for many of the details here.

We’ll begin with the highly praised double Epsilon (ε) Boötis, commonly known as Izar (EYE-zar). The name means “girdle” or “loin cloth” and refers to the star’s position within its constellation figure. William Herschel discovered Izar’s dual nature in 1779, describing it as “very beautiful.” In his 1867 double-star catalog, the Reverend William Rutter Dawes called Izar “one of the most beautiful stars in the heavens,” but his contemporary Friedrich Georg Wilhelm von Struve is generally credited with bestowing the name Pulcherrima (most beautiful) on this pair.

Izar is nicely split through my 105-mm refractor at 122×. The brilliant, golden primary watches over a snowy white companion to the north-northwest that shines 2.2 magnitudes dimmer. Many observers see the companion as blue or green, a common color-contrast illusion that can sometimes be dispelled by using enough magnification to widely separate the stars.

Farther north in Boötes we find Mu1 (μ1) and Mu2 (μ2) Boötis. Mu1 also bears the name Alkalurops (uhl-kuh-LOO-rops), which in the course of a torturous history evolved from a word meaning “club” into a corrupted form of another word that’s supposed to signify a “shepherd’s staff.”

Through my 105-mm scope at 28×, white Mu1 is widely separated from yellow Mu2, which stands a roomy 109″ to the south. At 127× Mu2 splits into a close pair of yellow stars, one shining at magnitude 7.1 and the other a half magnitude fainter. The Mu2 pair is a visual binary with a period of only 265 years. This is a good time to observe the pair since its stars are currently 2.2″ apart, close to their greatest separation, with the brighter one south of its attendant. While Mu1 is also a binary, the components always appear too close together to discern.

Are the two pairs physically related? A Bayesian probability analysis by Ed J. Shaya and Rob P. Olling (Astrophysical Journal Supplement, 2011) places the likelihood at nearly 100%. However, a 2014 study by Olga Kiyaeva and colleagues (Astronomy Reports) indicates that differences in the heavy-element abundances between the two systems favors a scenario in which they have different origins and are simply undergoing a close encounter.

Now we’ll head over to Hercules where we’ll meet the spectacular double Alpha (α) Herculis, Rasalgethi (rahs-uhl-JAY-the¯). Rasalgethi means “the Kneeler’s Head,” as we see Hercules upside-down in the sky. In the 105-mm scope at 76×, this remarkable pair boasts a splendid, orange primary guarding a yellow companion 4.6″ to the east-southeast. A magnification of 122× makes distinguishing the colors easier. The stars orbit each other in a stately march of roughly 3,600 years. The direction of the companion with respect to its primary shifts slowly, but the apparent separation barely changes throughout the orbit.

There’s more to the Rasalgethi system than meets the eye! The companion is actually a spectroscopic binary composed of a G5 giant star and an F2 dwarf separated by only two-fifths the distance between the Earth and Sun. They complete an orbit in a mere 52 days. The primary giant is a semi-regular variable with a magnitude range of about 2.7 to 3.6 and a mean period of roughly 126 days. The primary also appears to be binary, resolved three times at separations 0.16″ to 0.19″.

One of my favorite doubles is Beta (β) Cygni, Albireo (al-BIH-ree-oh). Strangely, the common name is meaningless. The story begins with Ptolemy’s name for Cygnus, ornis (bird), which was transliterated into Arabic. The Arabic name was then transliterated into Latin during the Middle Ages, and one commentator wrote that the resulting moniker might be derived ab ireo (from ireus), the name of an aromatic plant. A Latin version of Ptolemy’s Almagest showed the words ab ireo on the line just before the constellation’s first star, and it seems to have been mistaken for the name of that star. Finally, ab ireo was made to look Arabic again, morphing into Albireo. If you’d like to know more about the often amazing origins of star names, pick up a copy of the authoritative book A Dictionary of Modern Star Names by Paul Kunitzsch and Tim Smart.

Albireo is a must-show at public star parties as a wonderful study in color, temperature, and stellar evolution. The colors show surprisingly well even in 15×45 binoculars, where I see them as gold and blue, yet the secondary looks blue-white when I use a telescope. Sissy Haas, author of the gem-packed book Double Stars for Small Telescopes, is much more creative with color names than I am and surely must have had the 64-color pack of Crayola crayons as a child. She describes Albireo as “a stunning pair of deeply colored stars, brilliant citrus orange and vivid royal blue.” With its golden or citrus hue, Albireo A must be much cooler than bluish Albireo B, so why does it look brighter? The answer, of course, is that the A component is an aged giant, and thus a much bigger light source than the blue-white dwarf.

According to the Washington Double Star Catalog, the primary star has two very close companions. One (Ac) is a hot, blue dwarf with an orbital period of 214 years. The separation is currently 0.40″, increasing to a maximum of 0.66″ near the end of this century. The other (Ab) is a much closer companion about which little is known. Albireo B was once considered double as well, but there was only one detection, now believed to be a mistakenly assigned measure of the primary and one of its close companions.

Are Albireo A and B physically related? It’s not certain. They have statistically the same parallax distance and may be moving through space together, but their distance from us and their apparent separation implies an unusually long orbit, on the order of 100,000 years.

Our final target also lies in Cygnus, at the bend of the Swan’s northern wing. Despite being the 4th-brightest star in the constellation, Delta (δ) Cygni bears no common name. Delta is a triple star made up of a tight pair accompanied by a faint companion at a spacious remove, an arrangement that helps stabilize a triplet.

Through the 105-mm refractor at 122×, the close pair is well split, showing a resplendent white primary with a 6th-magnitude, yellow-white companion 2.8″ southwest. At any magnification high enough to split this pair, the much dimmer, 12th-magnitude companion shyly standing off 63″ to the east-northeast hardly looks like a true companion.

The close pair is a visual binary with a period of 918 years. Its apparent separation will increase for nearly four centuries to a maximum of 4.8″. From a hypothetical planet circling the yellow-white dwarf star, the subgiant primary would shine with the light of several thousand full Moons, effectively banishing the night with its presence. What a sight!