Emily Lakdawalla is the web editor for the Planetary Society.

This is the web supplement for the article of the same name in the January, 2010 issue of Sky & Telescope. Click here to download a 1.5-megabyte PDF of the article.

This supplement is divided into three sections. If you're only interested in one specific section, click the corresponding title below.

Additional information about how the images in the magazine article were obtained and processed.

Hyperlinks to all the websites mentioned in the magazine article — and more — with brief descriptions of each website.

Just the hyperlinks, in alphabetical order.

This image was the product of many hands and minds. It's based on raw images from the Mars Exploration Rover Opportunity (see below for details). The data set in question was recorded by Opportunity's Navigation Camera on Sol 950. A discussion soon started on Unmanned Spaceflight.com (see below for a description of this website). You can view the entire discussion here. Within less than 24 hours, five amateur imagesmiths, each from a different country, had collaborated to stitch together eight of the images, correct, and colorize them. The end result became the Astronomy Picture of the Day for October 17, 2006. The image at right was a different impression of the same mosaic by Glen Nagle — from yet another country (Australia).

This is an example of an image that's not very interesting to a scientist but is evocative and powerful to the public. We never see Mars in a crescent phase from Earth due to our closer orbital position to the Sun. But both Viking orbiters achieved crescent views of Mars as they approached. This is the final view of Mars captured by Viking Orbiter 2 before its orbit insertion on August 7, 1976. It's composed of six images, three each through red, green, and violet filters. Viking Orbiter images are available through the PDS Imaging Node (see description below).

The author converted the two sets of red, green, and violet images to RGB color (using violet for the blue channel), then assembled them in Adobe Photoshop. Photoshop was also used to adjust the brightness and contrast in each color channel until the color in the two frames blended seamlessly and also looked like Mars' appearance to modern spacecraft cameras with true-color capability.

Valles Marineris is clearly visible at the center of the disk, crossing the terminator. In the south, frost extends up into the Argyre basin; on its edge, with a dark outline, is the crater Galle, famous for the eroded remnants of a central ring that makes it look like a happy face. 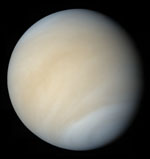 This view is processed from 78 Mariner 10 frames captured through orange and ultraviolet filters. It's intended to look approximately natural in color, though the use of the ultraviolet images makes cloud patterns more visible than they would be to the human eye. To be most accurate, a photo of Venus would look almost exactly like a cue ball!

Mattias Malmer, of Sweden, began by locating the data that composed this mosaic — no easy task. Although the Mariner 10 data is available online, it is not in a modern format; the data was copied directly from original magnetic tapes without reformatting. Fortunately, he job was made much easier by Piotr Masek's Free Software for Planetary Science (see below).

To generate the approximate-true-color view, Malmer created two mosaics, one from the orange-filter data and one from the ultraviolet-filter data. Then he calculated synthetic color, approximating what red, green, and blue channels would look like through band math. He used the orange-filter data as the red channel; the green channel is composed of 80% of the orange plus 20% of the ultraviolet image; and the blue channel is composed of 50% each of orange and ultraviolet images. He sharpened the final image to emphasize subtle details.

Philosophy professor Ted Stryk realized that there were images of transits and/or shadows cast by moons onto planets for every outer planet except Neptune. He reasoned that there ought to be such images in the Voyager Neptune image catalog. He calculated when some of the inner moons cross the disk and eventually located several images that included the shadow of tiny Despina (which had been discovered in early Voyager 2 images) crossing Neptune's disk. In the best image set, he realized that Voyager had actually caught Despina itself transiting.

The original data consisted of four frames captured through blue, orange, violet, and green filters. Stryk cleaned up the original images, which were marred by some data gaps and reseau markings, then produced a color composite image of Neptune, which required him to fill in some data gaps on the left and right edges of the disk (as Voyager's field of view shifted from west to east across Neptune in the time that separated each pair of frames). Voyager "true color" RGB photos are traditionally composed of orange-, green-, and blue-filter images, or orange, green, and violet. The Voyager vidicon detectors were not sensitive to light at the longest-wavelength end of the visible light spectrum, so orange-filter images are the "reddest" available. Stryk had to process the images of Despina and its shadow separately, or otherwise they'd show up as funny-colored spots on the images. Also, Despina was actually nearly as dark as the shadow it cast; Stryk brightened the images of the moon substantially to make it easier to see.

The author posted this picture on her blog for
August 20, 2009. She commented:

I've been watching Cassini's raw images website for the latest eye candy from Saturn's equinox. Here is a particularly nice view of a crescent Saturn with dark rings, just a week after equinox. I love the skinny shadow cast by the vast ring system, and the way the rings are brightened by reflected Saturnshine. The image is composed of red, green, and blue frames so has some relationship natural color, but because Saturn is so much brighter than the rings the color doesn't work particularly well.

A few months later, the Cassini Imaging Team published a high-resolution image of the same event that became the Astronomy Picture of the Day for November 10, 2009.

Unmanned Spaceflight.com, or UMSF, as its members call it, was founded in 2005 by British medical animator Doug Ellison as a place to discuss and share amateur-processed versions of the images being returned every day from Mars by the Spirit and Opportunity rovers. Since then its focus has broadened to cover discussion of all robotic space flight. Because Ellison runs a tight ship, with zero tolerance for trolls or conspiracy theorists, the site is frequented not only by space enthusiasts but by space scientists and engineers.

All Spirit and Opportunity images are spewed to the internet at the Mars Exploration Rover Image Gallery within hours of their arrival on Earth. American programmer Michael Howard wrote a cool Java-based tool called Midnight Mars Browser that automatically downloads rover images and displays them in slideshow or panorama modes; the panoramas are displayed in a virtual reality environment that allows you to rotate them 360 degrees around you, making you feel immersed in the Martian environment.

The Planetary Data System (PDS) is the digital repository for all NASA science data, and holds some data from other space agencies as well. The PDS is divided into several disciplines, each of which has a "node" hosted at a different NASA center. Most space image data can be found at the PDS Imaging Node, hosted by the Jet Propulsion Laboratory. For an explainer on the PDS and some information about the proprietary PDS image formats, see the Planetary Society's Space Imaging section.

Several image catalogs are available through the PDS Rings Node, which also has handy tools that compute positions of planets and moons as seen from spacecraft.

If you would like to see glorious printouts of images from space missions or copy Gigabytes of data without having to siphon it through your home Internet connection, visit your nearest Regional Planetary Image Facility. They are open to the public but may require an appointment for access. There are RPIFs in Arizona (Flagstaff, Tempe, and Tucson); Providence, Rhode Island; Ithaca, New York; Pasadena, California; Houston, Texas; Washington, D.C.; Honolulu, Hawaii; Rome, Italy; Berlin, Germany; Sagamihara, Japan; Beer-Sheva, Israel; London, UK; Fredericton, New Brunswick, Canada; and Orsay, France.

All Cassini images from Saturn, its rings, and its moons are sent straight to the Internet at saturn.jpl.nasa.gov/photos/raw. For an explainer on how the Cassini imaging system works, see the Planetary Society's Cassini-Huygens section. See also the tutorial on creating color images from Cassini raw data. And there's an example how to make a mosaic.

The "Mars Webcam" is an engineering camera aboard Mars Express that fulfilled its purpose of watching the departure of the ill-fated Beagle 2 lander, then was shut down for several years. In October 2007 it was returned to service to provide images for the public; although not a particularly high-quality instrument, it often captures unusual high-phase full-globe images of Mars. New images are usually posted every few days at webservices.esa.int/blog/blog/6 though the camera sometimes goes on hiatus, as it can only be used when it does not interfere with Mars Express' science operations.

A handy search tool to Voyager images is provided by the PDS Voyager Image Query Form. The PDS also has an Outer Planets Unified Search Tool that works for all of the missions listed above. However, Cassini image searches are more easily performed at the Planetary Image Atlas.

The website Free Software for Planetary Science contains software written by Polish physicist Piotr Masek. It opens, processes, and saves data from early spacecraft that used now-obsolete data formats, including the Mariner 6, 7, 9, and 10 missions and others.

Most serious amateurs use Adobe Photoshop, but nearly any paint software package can be used to perform basic corrections (such as cropping and contrast adjustment) to space images. Fully featured, free photo editors include GIMP and ImageJ. To view and convert PDS-format images to more familiar file formats, use the PDS's NASAView or Bjorn Jonsson's IMG2PNG. If you want to download whole directories full of images, you may find wget useful.