Star Clusters: Four for the Road 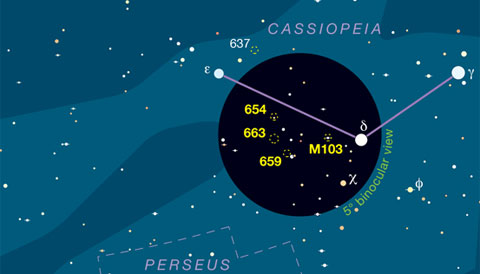 The Romans called the Milky Way the via lactea or “milky road.” It’s a road on which I frequently find myself wandering. I want to understand the structure of our galaxy — not just where the nebulae and star clusters are located in the night sky as seen from Earth, but where they are in three-dimensional space and how they relate to each other.

A quartet of clusters in the constellation Cassiopeia is a good place to start figuring this out. From Delta (δ) Cassiopeiae, scan 1° northeast to M103, and then onward for an additional 1.5° to NGC 663 (Caldwell 10). NGC 654 lies just under 1° to the north-northwest of NGC 663, and NGC 659 is a little closer still, to the south-southwest. All four clusters will fit comfortably in the same field of view.

NGC 663 is the brightest and easiest to pick out. On a good clear night, NGC 663 looks grainy with 8th- and 9th-magnitude stars that tremble on the threshold of resolution. Resolving stars in M103, NGC 654, and NGC 659 is more of a challenge, in part because bright foreground stars dominate each of those clusters. The clusters themselves appear as knots of slightly denser light in the galactic band.

It shouldn’t be surprising that these clusters are hard to resolve with handheld binoculars. The average distance to the Messier and Caldwell open clusters is just over 3,000 light-years, but these four in Cassiopeia lie between 6,300 and 8,200 light-years away, in the Perseus Arm of the Milky Way. NGC 663 isn’t any closer than the rest. It’s the brightest because it’s the largest: 30 light-years in diameter, compared to roughly 10 light-years for the other three. All four are signposts along the “milky road,” part of the structure of the galaxy made visible.

Matt,
About a year or more ago I sent a letter that was published in S & T about the question of which object was the real M103. I, and others, believe that NGC 663 fits the description by Mechain much better than NGC 581. He listed it as "A cluster of stars between Epsilon and Delta of the leg of Cassiopeia." NGC 581 is much closer to Delta and does not appear comet like in binoculars or a telescope. NGC 663 definitely looks like a small, round comet in binoculars. NGC 581 has a triangular shape. Various astronomers such as Smyth made several errors in placing some objects discovered by Messier, Mechain, Herschel and others because of the less than precise descriptions of their locations. Another example of this is M91. For years it was considered to be NGC 4571, but Kenneth Glyn Jones questioned that designation. We had corresponded on this issue and asked me and others check on it. We all agreed that NGC 4548 is the true M91. It is much easier to observe than 4571.