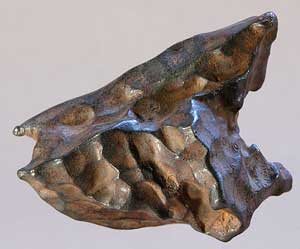 This iron meteorite was seen to fall in the Sikhote-Alin Mountains in eastern Russia in 1947. Even though it was picked up years after the fall and has started to oxidize, it still shows well-formed thumbprints (regmagylpts) and some remaining fusion crust.

This iron meteorite was seen to fall in the Sikhote-Alin Mountains in eastern Russia in 1947. Even though it was picked up years after the fall and has started to oxidize, it still shows well-formed thumbprints (regmagylpts) and some remaining fusion crust.

Iron meteorites are generally easier to identify than stone meteorites due to their unusual shapes, surface characteristics, and high density. This means irons are more likely to be found by chance by people not actively looking for meteorites. Hikers, rock hounds, and relic and treasure hunters sometimes come across strangely shaped metallic masses in the field, and a number of meteorites completely new to science have been discovered accidentally in this manner.

Even though iron meteorites are more obvious to the untrained eye, they are actually much rarer than stones. Statistically, seven times more stone meteorites are seen to fall to Earth than irons. The following surface characteristics make irons much easier to spot in the field. A number of these features are also evident in stone and stony-iron meteorites, though they tend to be more pronounced in irons.

Thumbprints, known scientifically as regmaglypts, are small, rounded indentations found on the surface of many irons. Caused by melting during the meteorite's flight to Earth, they are not present in terrestrial rocks, though similar features can sometimes be seen on common stones in the desert, and are the result of wind-blown sand gently eroding exposed surfaces.

As a meteorite burns on its descent through the atmosphere, some of its molten surface forms droplets that move in tiny, delicate rivulets called flow lines. These fine patterns may be as thin as the strands of a spiderweb and might only be clearly visible through a loupe or magnifying glass. 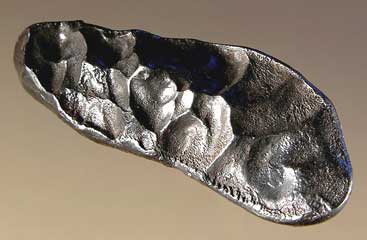 Most meteorites tumble and spin as they plunge through our atmosphere. But occasionally one will maintain a fixed orientation for the duration of its flight. Melting and ablation will cause it to acquire a rounded or shield-shaped front, much like a bullet or the nose cone of a missile. Such meteorites often display a flat or slightly concave trailing edge, and end up looking like the heat shield of an Apollo space capsule.

Meteorites with a high degree of orientation also often acquire rollover lips when a small amount of molten material literally rolls over onto the meteorite's trailing edge. Rollover lips manifest themselves as delicate rounded rims on the reverse faces of oriented meteorites. If you've ever watched molten candle wax flow over the side of a saucer, you'll get the idea. 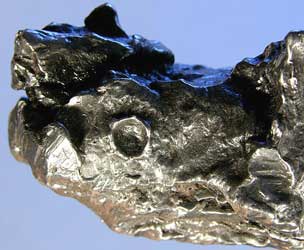 This small impact pit was caused by two fragments colliding with each other during flight.

Many or most meteors break up as they hit Earth's atmosphere, creating multiple shards as a result of explosive fragmentation. These fast-moving pieces travel together and may crash into one another. Tiny fragments hitting larger ones sometimes create impact pits, which look like miniature meteorite craters.

Fusion crust — a burned, dark, paper-thin rind on the outside of meteorites — is fairly common on stones, but rarely seen on irons. Only a freshly fallen iron will exhibit fusion crust, as the layer will decay quickly in Earth's moist, oxygen-rich atmosphere. The few iron meteorites that have been recovered shortly after a witnessed fall exhibit an attractive bluish-black gunmetal color — a testament to the extremely high temperatures they endured during their brief, fiery flights.

Occasionally a natural hole will form in an iron meteorite, when a portion of its surface melts completely through during flight. Perhaps 1 in 1,000 meteorites will exhibit a natural hole, and they are very highly prized by collectors for their aesthetic beauty. 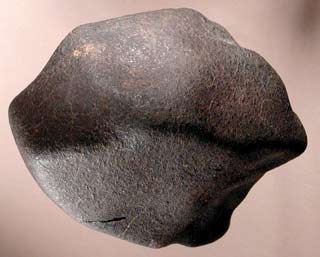 This complete stone meteorite, found in the northwestern Sahara Desert, exhibits both orientation and a rich black fusion crust.

Although rarely evident on the surface, most iron meteorites will reveal a remarkable interlocking pattern of intricate crystals when cut, polished, and treated with a mild solution of nitric acid. The pattern is named after the Austrian Count Alois von Beckh Widmanstätten, who described the phenomenon in 1808. It is also known as the Thomson structure. Widmanstätten patterns are only seen in iron meteorites and some pallasites, and have never been found in terrestrial rocks. This crystalline structure in irons is thought to be the result of extremely slow cooling of a large asteroid's once-molten core in space. Two nickel-iron alloys — taenite and kamacite — each with slightly different amounts of nickel, grow together to create the intricate and beautiful Widmanstätten patterns.

The features described here are, for the most part, unique to meteorites, and just part of what makes these visitors from outer space such exciting and unusual collectibles. Keep your eyes open! Thousands of meteorites land on Earth every year, and there are still many out there waiting to be found.