The 2008 Eclipse and the Saros Cycle 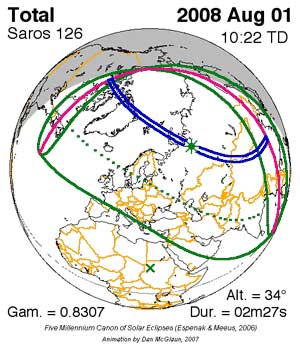 The path of totality for the solar eclipse on August 1, 2008, begins in northern Canada and ends in China. The eclipse is a member of Saros 126. Click on the image to run an animation of the full Saros series spanning the centuries.

Any two eclipses separated by one Saros period occur at the same time of year with the Moon at the same node, and at nearly the same distance from Earth. This makes the Saros a useful tool for organizing eclipses into groups or series. Although the geometry of each eclipse in a Saros series is quite similar, it’s not identical. Each series typically lasts about 13 centuries and contains approximately 70 eclipses.

The path of totality for the solar eclipse on August 1, 2008, begins in northern Canada and ends in China. The eclipse is a member of Saros 126. Click on the image to run a 1-megabyte GIF animation of the full Saros series spanning the centuries, assembled by Dan McGlaun.

The series began in 1179 with a small partial eclipse from Antarctica. The next seven eclipses were also partial as the Moon's umbra passed closer to Earth with each event. The first 28 central eclipses of Saros 126 were all annular (ring eclipses) with the duration of annularity steadily decreasing during each eclipse. Three annular-total “hybrid” eclipses followed in 1828, 1846, and 1864. The series didn't produce its first purely total eclipse until May 17, 1882.

Saros 126 is now a series in old age. After 2008, it will produce only two more total eclipses in 2026 (Greenland, Portugal, and Spain) and 2044 (Canada and the north-central US). After that, the series will dwindle with a long sequence of 23 partial eclipses. The final eclipse occurs in 2459, 1,280 years after the series began.

For full details about the August 2008 eclipse, you can browse the maps and weather prospects at NASA's Eclipse Home Page, or download the 2008 Solar Eclipse Bulletin as a PDF file. 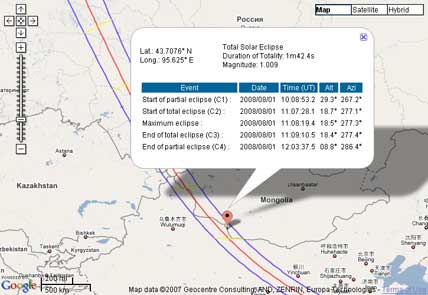 NASA's Eclipse Home Page includes interactive maps that will provide local circumstances using the Google Maps interface. Click on the image to launch the map for the August 1, 2008, eclipse.